Working on making smoke, explosions and backgrounds look much nicer. Plus, the game now has an official wiki.

I'm still working on Airships 6.3, and it's shaping up to be a *very pretty* update. Most recently, I've made particles and explosions look much better and am now replacing the simple low-res backgrounds with more detailed ones. Also, Airships has an official wiki now!

Up until now, particles in Airships have been very simple: they were all coloured squares of various sizes, which works well for small things like sparks, but is a bit bland for smoke and explosions. In particular, I really wanted the smoke to be lit up dramatically by the flashes and fire of battle.

Getting particles hooked up to the lighting engine wasn't that hard - all the shaders were already in place - but it took me a while to find a good look for the smoke. I first tried using a smooth look for the particles, and while it looked quite nice, it didn't fit the look of the rest of the game.

Then I came across an article about how explosions are handled in Vlambeer's Nuclear Throne, including a very nice-looking explosion animation:

Looking at it in detail, you can see that after the initial flash, the explosion consists of a number of particles that don't move all that much but steadily shrink and darken. I produced a similar effect in Airships by spawning a central light-emitting flash particle and a number of smoke particles surrounding it:

And the same effect but on a smaller scale for cannon blasts:

Having settled on a style for this kind of thing, I also re-added clouds, again using the lighting system for them: 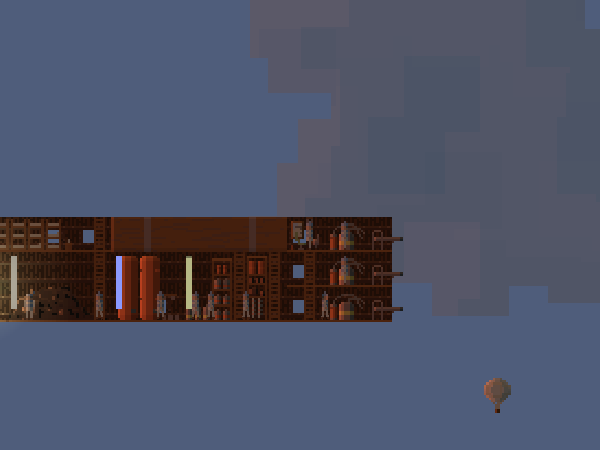 As I wrote previously, the point of 6.3 is to really get the game looking pretty in a bid for mainstream success. This left one major sore point: the low-res and rather uninspired forest and mountain backgrounds. At this point, they were pretty much the only thing not using the new colour palette or lighting system, so obviously they had to go. This is what they're getting replaced with:

A much larger set of modular backgrounds: hills, forests, towns, towers, windmills, and so on. This is a lot of pixeling, and it's kept me pretty busy over the last few days, as each image needs to be first drawn and then given a bump map for the lighting to work. But the end result should be really quite good. 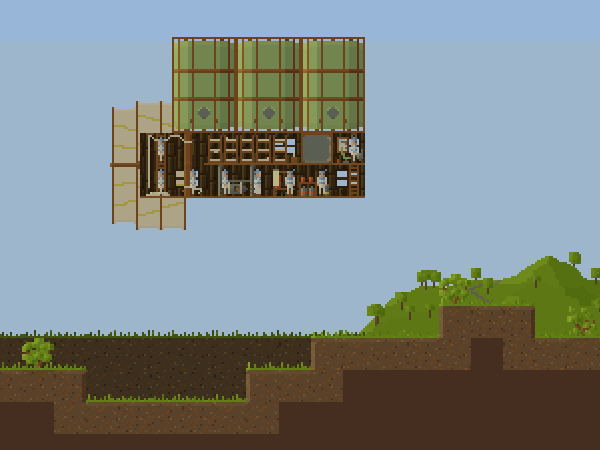 That's all for now, except for this wiki thing: There's now an official Airships wiki hosted on Gamepedia. Right now, content is still pretty sparse, but I've put in a bunch of entries. Head over there and contribute, and one day it should be an excellent resource for the game.

And join me next time, when I'll be writing about the new modules getting added in 6.3.