Partial Quest has been revived! I've re-skinned it in a papercraft direction and I'm taking this project indie. I'm finalizing a deal with a contract artist (amazing work) and we'll finish it up. Today's dev update outlines the process I took for the papercraft prototype (the real artist's work is much better, coming soon in future updates!). 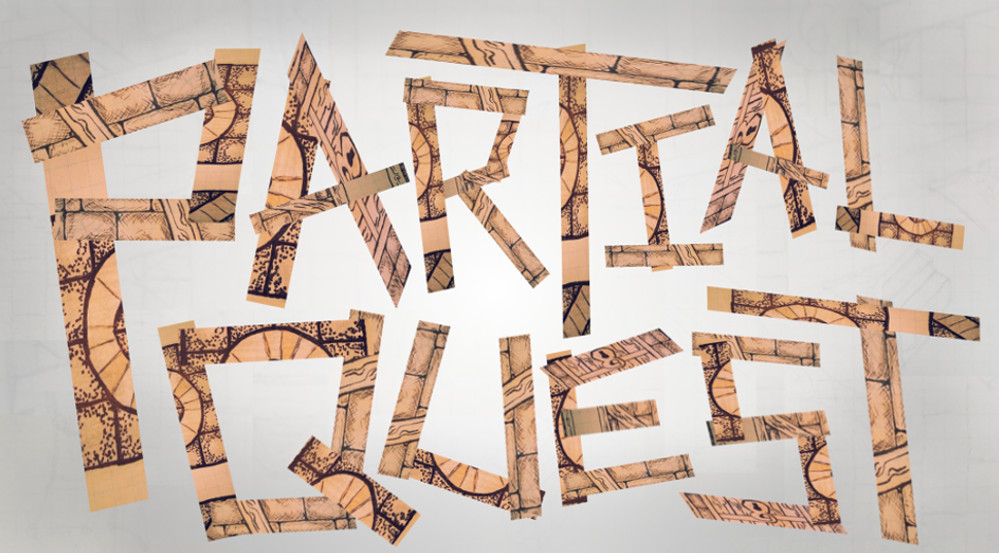 Partial Quest has been revived! As explained in the summary, I had created a papercraft remake of the project and pitched it to the studio I worked at. It was well received so it went on the pile "to be worked on eventually". Well, you know how things go, you get busy with the real paying projects and the pet stuff falls by the wayside.

Anyway, I'm on my own now and I'm taking it on as an indie project so it's back! I'm going to be keeping the papercraft direction. I like it a lot. Please understand: my art is all just temporary. I'm closing a deal with an amazing contract artist (next dev update will be awesome!), so you have to use your imagination to see how it may evolve. Either way, here's a rundown of the process I took to rebuild the game. 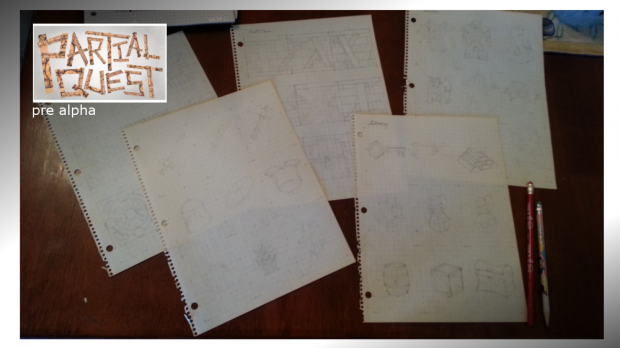 Instead of walking through a literal dungeon, I decided to present the game as if you are on a table top maze that was created with homemade cards. You get to be your player card walking through the papercraft dungeon on the table top. I broke down all the core assets needed for the base set of tiles to build all the gameplay: wall tiles, floor tiles, door tiles, enemy cards, pickup cards, and breakable cards. Using some trusty grid paper, I sketched out a bunch of elements. 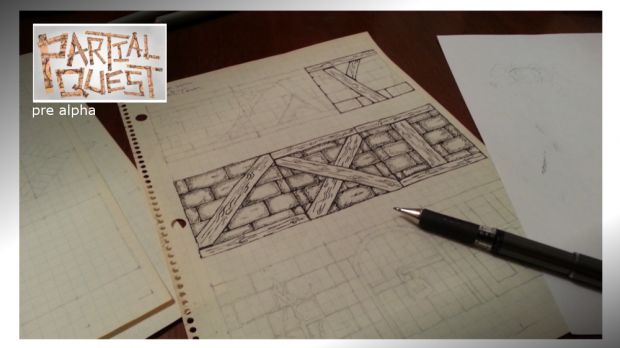 Following all the penciling, I moved on to inking everything. Again, all of this art is temporary. It was meant to be a proof of concept for myself and any artist I showed it to. I had fun doing it, but one warning for anyone considering going down this path as an "easy answer" to not making 3D assets, it's a lot of work! 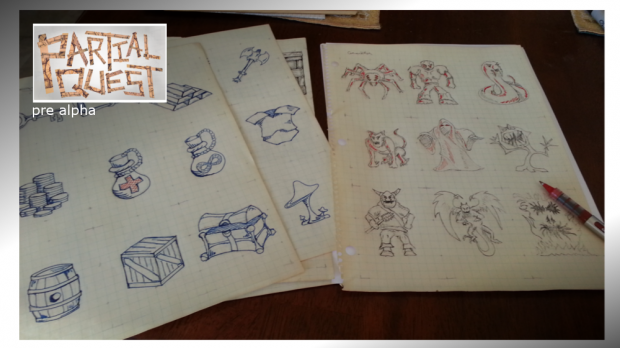 After inking all the floor and wall tiles, I moved on to inking all the characters and interactibles (is that a word?). I was working on a predetermined grid size so that everything would scan and import easily. Again, this was all temporary art for proof of concept. The real art will be coming from an amazing artist I'm in the midst of negotiating with. 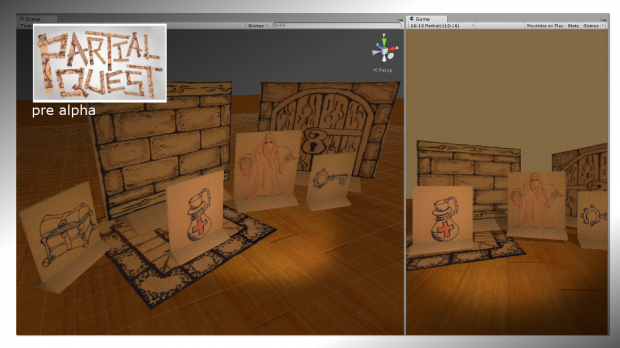 Ok, time to go in the engine! I created a simple 3D model to resemble a piece of rigid paper folded into a card stand. I scaled it in 3 sizes: (one for walls), one for pickups. I scanned and prepared all the textures for use in game, applied them to the models and created prefabs for every piece. 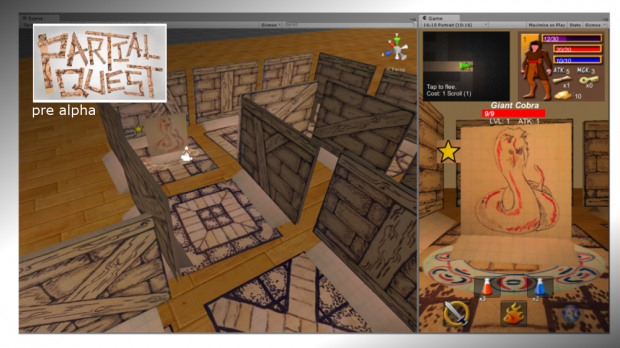 Levels are assembled by my custom level editor data the same way as in the previous iteration of this project. A "tile" is a grid node that has a floor and a wall prefab. The wall prefabs have all 4 walls and based on the tile type, the walls turn on and off to form halls, corners, and dead ends. "Tiles" have meta-data to indicate whether there are doors on the walls, secret breakable walls, locked doors, breakable spawns, pickup spawns, and enemy spawns. The above picture shows a segment of a level loaded in the unity editor on the left, and from the first person camera view on the right. You have encountered a Giant Cobra, but no worries it has con'd yellow for easy. All HUD is still temporary and leftover from the previous art direction of the project. 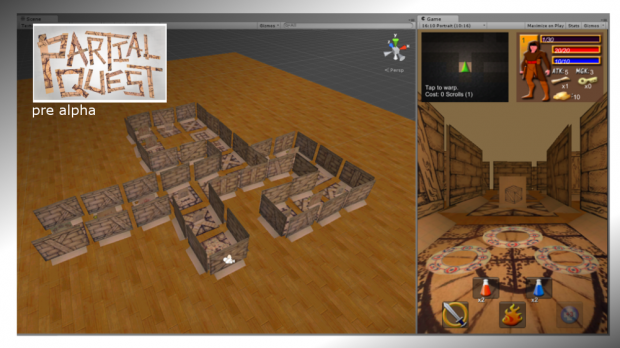 Above are 2 views of a full small level. The layout in Unity editor on the left, and the first person game view from the camera on the right. When wall and floor elements are placed as the level data is being parsed, a small random rotation is applied to them to give them a more haphazard feeling as if a real person had arranged them on the table. 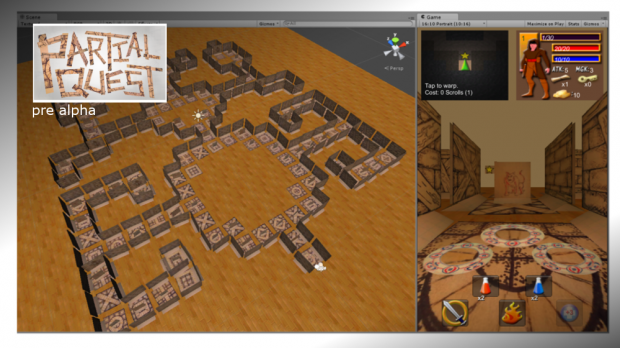 Above are 2 views of a larger 'hard' level (unity editor on the left, camera view on the right, hud is old and placeholder). It's great fun to see the game parse and spit out the same level data with such different looking assets to what the project used to look like. Level difficulty is determined by overall size of the level, number of hard and boss creatures, and minimum distance between entrance and exit. Yes all this art looks ugly as sin, it's placeholder (including hud) as proof of concept. 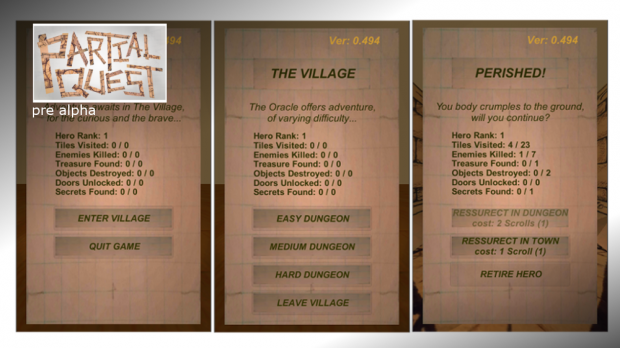 And finally, some of the remade menus (still placeholder art, just a functional proof of concept). Much will change but this is the basic data that needs to be accessible and the bare functionality. Note the far right screen which now exposes the new "scroll economy". This is a roguelike in that there is "perma-death", however it is a soft boundary. Players collect scrolls while exploring dungeons, or purchase them in town with coins and gold bars they find in dungeons. Scrolls can be used to flee encounters mid-fight, and to resurrect (I spelled it wrong in the menu) on death. Players can spend one scroll to save their dead hero but not the progress in the current dungeon, or 2 scrolls to save their dead hero and continue in the current dungeon from where they are.

If you've made it this far, thanks! The feedback and support that I've received during the various incarnations of this project have been very motivating. I'm looking forward to closing negotiations with the artist and moving this into full development again, and releasing it! I'll be posting a new update as soon as the art plan is finalized (in the works at this very moment). It will likely target Android first as I'm still setting up my Apple developer and seller accounts. Let me know if you're curious about any aspects of the project and perhaps I can do a dev update on that topic.