We've been going full steam ahead on the Confederate faction and it's about time we showed some of our work. Enjoy the new video!

So, it's been a while since we had a USEFUL news post, and with all of the progress we've made recently, there's no time like the present.

First up, we've got a new video! It features some huge battles, including some of the newer units for both sides. 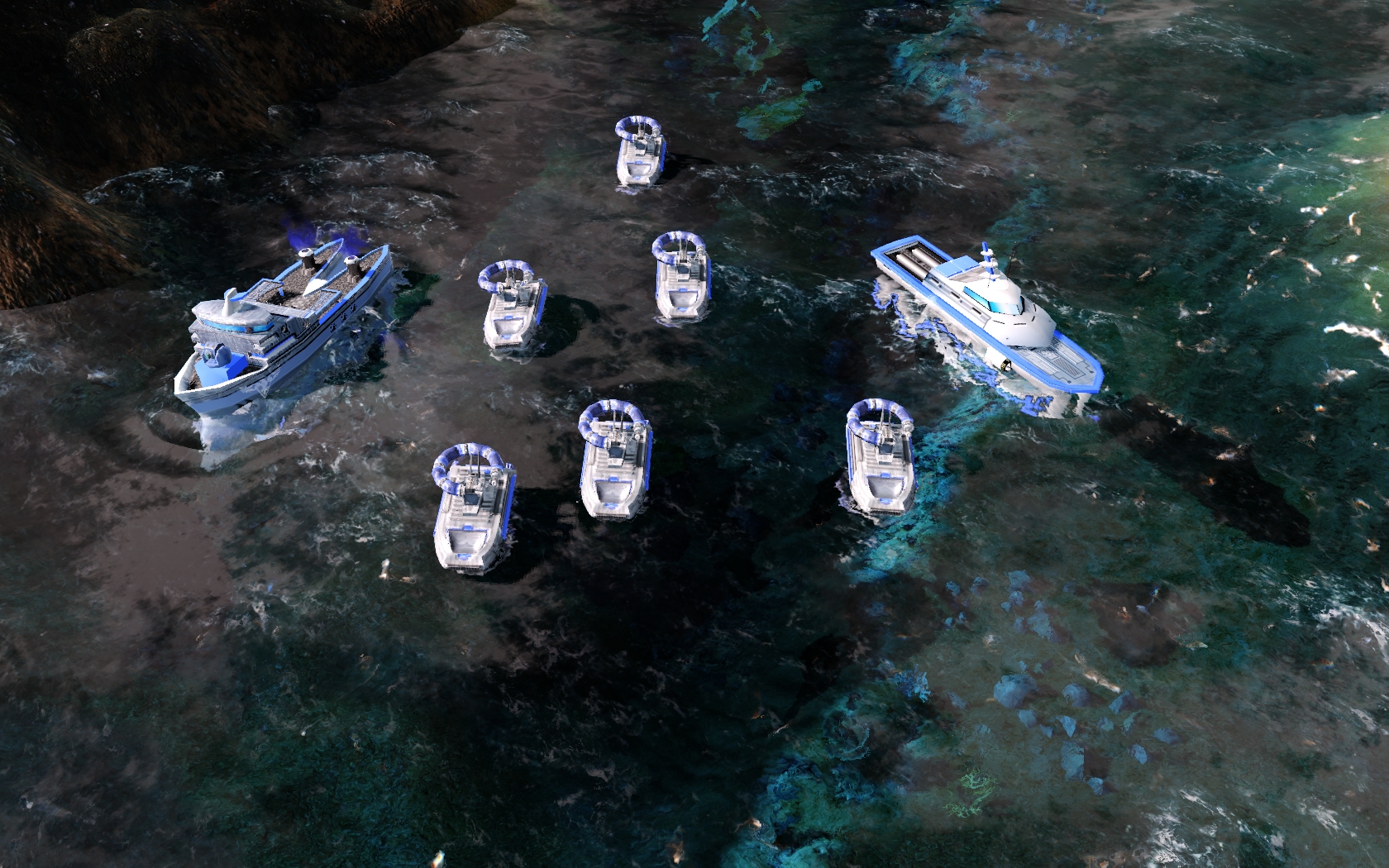 For the Allies, the only new unit visible for most of the battles was the Particle Expeller, easily identified by the large loop-like weapon turret. It's an amphibious unit, so it plays an important part during the beach landing alongside the Riptides, providing some much-needed anti-vehicle support.

The Alert Icebreaker is also visible at the end of the video, as is the Swan Seaplane. 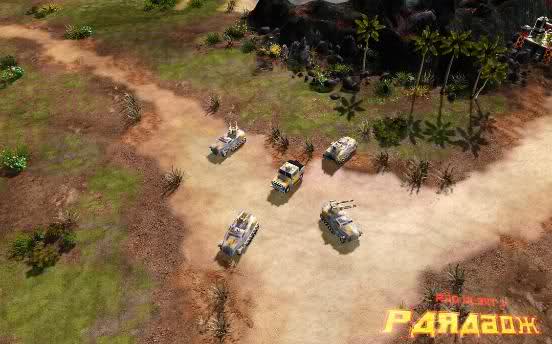 For the Confederates, the Ranger jeep is visible right off the bat. It's a quick vehicle with fairly low armour, armed with a machine gun capable of ruining any infantryman's day. At the moment it's capable of targetting aircraft as well, but that may change in balancing. The Ranger is right next to some Confederate Gun Turrets, which are anti-tank defensive structures capable of switching to an indirect-fire mode for shooting over walls. The Confederate build system also makes them perfect for defending choke points, such as those hills on Temple Prime.

You can also see a good number of Lee Halftracks, armed with quad cannons capable of clearing the skies on command... and not too shabby against soft targets either. Their secondary ability allows them to camouflage at the cost of movement and anti-infantry power - they're trained to keep their eyes to the skies while camo'd, as they're designed to be used in an anti-air role and unlike most other camo-capable units, are able to reactivate their fibre-optics almost immediately after firing. 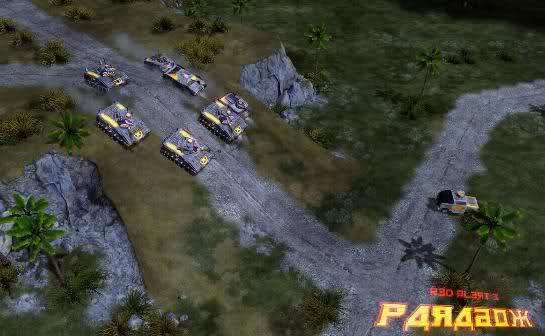 The most common tanks in the video are the huge Mastiff and the light Beagle. The Mastiff has the armour and firepower to attack the opponent directly (after some upgrades), and are the main battle tank of the Confederate army. The Beagle has a much lighter cannon, but is far more agile, and as a result is designed to take advantage of an enemy's rear armour. Their secondary abilities complement each other, with the Beagle designed to boost the Mastiff's speed at the expense of its weaponry and the Mastiff designed to boost the Beagle's weaponry at the expense of its speed. 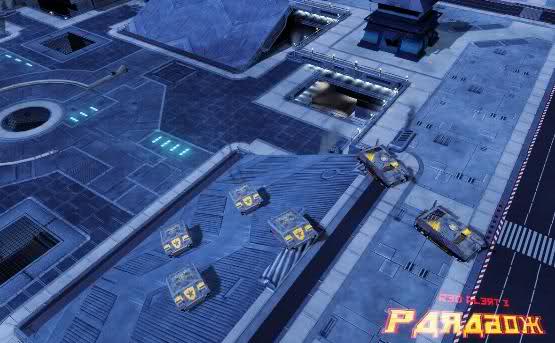 The last two Confederate units visible in the video were the Jackson APC, which looks essentially like a little box with wheels, and the Bulldog Tank Destroyer, with a low profile and an intimidating hull-mounted cannon.

The Jackson is useful in its simplicity - it's a troop transport and nothing else. All the other space that would've been taken up by ampibiousness, weapons, or (hypothetically) some kind of crazy disguise capability are instead replaced with sheer weight of armour. The Jackson is BY FAR the most resilient troop carrier in the game, and all that extra weight gives it the ability to crush infantry.

The Bulldog is a powerful anti-tank unit, but it doesn't exactly have the health to give it the role of Main Battle Tank currently held by the Mastiff. While it can usually destroy one or more enemy tanks in a single volley - the Bulldog fires 3-shot bursts - it has a slightly shorter range than most enemy tanks and a severely limiting reload time. Rather than face enemies head-on (as it does unsuccessfully a few times in the video), it is designed with camouflage capability - it hunkers down, becomes invisible, and if angled right, ends up with a prime view of the enemy's weak rear armour after they pass by unaware. 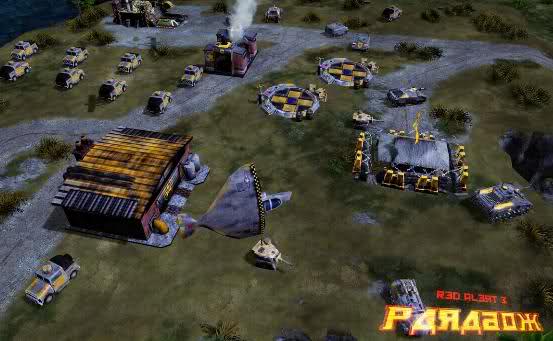 The last few units in the video are the Duster Aircraft and the Razor Sub.

The Duster is visible dropping a bomb partway through the video - this bomb generates a tornado that lifts up infantry and lighter vehicles, damaging them over time and killing them upon landing 99.9% of the time. It can land anywhere and reloads upon landing, and while on the ground it can move slowly in case it needs to (gradually) escape some anti-air units.

The Razor Sub is at the very end of the video and never really sees action, but its main weapons are drill torpedoes that damage enemies over time until they return for repairs - perfect for harassing the bigger naval artillery units. It can also fire a remote controlled Mole Missile onto land that digs underground until it finds its target, usually a structure... and then it explodes with devastating force.

As we complete some more of the Confederate units we'll be making videos showing off their many functions, so don't touch that dial! Or just like, watch our page or something. Either way, you won't be disappointed!

Alota updates this past couple of days thanks! And good job as well

Is that music in the game or has it been added to the clip?

If it was in-game, it'd be awfully hard to synchronize them all like that.

Confederates sure did get owned easily.

I'm really glad, amongst all the Confederate units, you included some new Allied ones, as well.

he they got expellers

As always, awesome! And as always, you guys know what we need. :-P Starts with B, or a little prefix "mini". ;-P

Your hints are somewhat unhelpful.

Ha ha, no. The second letter of Greek alphabet. ^^

Feillyne, take it from an open beta tester, beta's are NOT demos. They're really not that enjoyable. You'll be playing to break Paradox, not have fun with it.

betas arent demo?? the hell you talking about. Some betas arent completed till its final which everything is playable and ready to go. Hell SW is beta and its fun and ima have fun playing paradox.

Actually beta-testing for bad stuff isn't so fun, or so says PsychL.
I really have no experience with actual betas, just open ones.

Hmm, beta-tester's job is a hard one, if you mean reporting bugs (or writing reports), but anyway you can get some fun. :-)

We will not be doing a public beta. Our beta test will be done with hand-picked players selected for their skill at the game, whose job it is to basically break the game over and over and over so we can get this thing roughly balanced. It's not going to be fun; the beta we'll be using will be filled with horrifically overpowered and underpowered units, graphically shortcuts, more than likely no voices... it'd probably ruin the experience for the average fan.

Most of the cool Confederate abilities need a little more work.
As you can see, head-to-head combat isn't their style.

The song is Rebel Battle.
It's also under videos if you want to look for it.

awesome work guys! love the tornado effect will Anti air units (I.E Apollos,Flaks etc. etc.) be able to shoot it while its in the air? (AA units are able to shoot down units that able being levitate by Yuriko etc. etc.)

They won't, but it's okay because the units that get lifted up will die anyway. It's a modified, localized, and VERY limited Vacuum Imploder effect.

And I loved the music :)

Shnazy new units ya got there!

Wow that was such an epic video, but yeah confederates are def more for quick anoying enemys eh? if your a slow turtle or soemthing probly bad idea to use them from what ive seen...

Probably a good assumption. If you're a slow turtle, China would be a far better bet. But Confederates aren't helpless in the defense, as well... as long as you plan ahead, at least. Nothing stops a tank attack like a few Hawker and/or Bulldog rounds up the tailpipe.

I like the confederates, look good, afew of thir units, like the humvee, reminde me of generals.

And the laies still look strong, which is good, i've got ot say even though this is the confederate's vid i do like the looks of that allied missile boat/tank

I think i saw a allied vechicle in the video that you dont mention in the update. Great looking units stilll!

You see, the idea here is you don't show your units getting owned if you're trying to show how awesome they are.

I'm starting to think it's more showing A) just how damn awesome the Particle Expeller is; and B) that the Confederates will no doubt lose in a straight fight.

Also C) that if you're outnumbered, your only real hope of winning is clever use of your Secondary Abilities... which, for the Confederates, are in varying states of working order.

I want the Chinese faction to be done. Guess you can't have every thing though.