The final development log for Overlooker now that the game is complete and being prepared for release.

I have completed my first game Overlooker! I am preparing it for release and plan for it to be out in the next few days. Although the game is basic and small in scope, I am very excited to release it and hear what people think. It took me 22 days to finish the game, but I was unfortunately sick for a few days so my total time working on the game would be closer to about 17 days. Now that I know I can make a game, I am already thinking of what the next one will be! 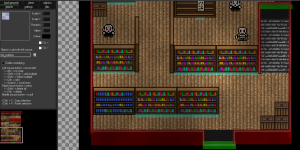 Screencap: Working on enemy placement in the Library Room.

I learned a ton about how to organize and plan your code while working on Overlooker. Some of the most appalling scripts are in Overlooker, but I am now able to look back at them and think of much better ways to achieve the same or better results. As I've said in previous development logs, the most important thing for me regarding Overlooker is to learn. I can't wait to take all I've learned these past few weeks and apply it to my next game. 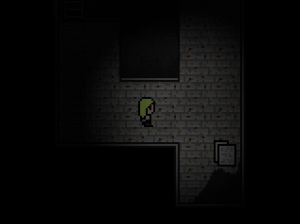 Screenshot: It gets dark down there.

This has also been my first time making sound effects. I love how corny some monster sounds are in old survival horror games, so I tried to play it up a little bit with my monster sounds. The result is that the enemy sounds make me laugh while playing the game, though more so because I can hear that it is my own voice. It's bizarre and funny to hear yourself coming out of angry little sprites trying to attack you. 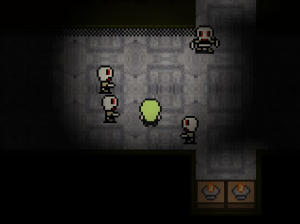 Screenshot: Me just prior to getting owned.

I'm hoping that I'll get to hear as much feedback and constructive criticism as possible for the game. I've learned a lot, but there is clearly much more that I need to learn. I never want to stop learning, as I want to work hard towards having each game I am a part of be better than the last. What gameplay elements are good or bad? What frustrates people when playing it? Is the game good enough that people keep trying to get to the end or do they give up? Do they like the presentation and style of the game? Did anyone understand the plot/theme? 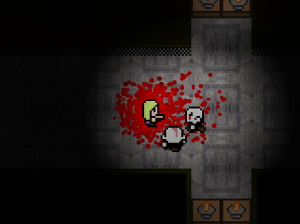 It's awesome that I can start 2015 by releasing my very first game. Every year of my life has been better than the last and 2014 has been no exception. That means I need to work my butt off to make 2015 even better, and I'm excited to work on my next projects. Happy new year everybody!