The day is here, after 7 long years in development it has finally been released! Out Of Hell is a zombie-horror, singleplayer TC for UT2004!

The day is here, after 7 long years in development it has finally been released! Out Of Hell is a zombie-horror, singleplayer TC for UT2004!

Out Of Hell is a total conversion for Unreal Tournament 2004. It is a horror-themed first-person adventure that takes place within Grinwood, an industrial city devastated by a zombie plague. Players will assume the role of Donovan Ling, a police officer sent from a neighboring city to investigate a garbled transmission from Grinwood. You must traverse a variety of areas while staying alive long enough to uncover the truth behind the mysterious zombie plague! 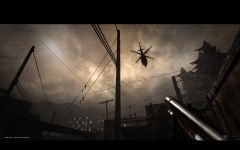 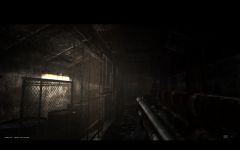 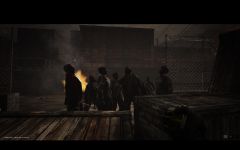 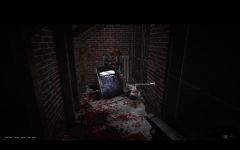 
KEY FEATURES
Out Of Hell has several interesting features that will surely appeal to horror-gaming fans everywhere! Out Of Hell has vast, beautifully detailed environments and a unique, immersive atmosphere accompanied by a haunting soundtrack. Players can look forward to exploring huge levels while choosing to avoid or bludgeon hordes of up to 30+ zombies! Those who are keen on backstory will be able to unravel clues hidden inside logs and files as they progress through the game!

Least I'll have something to look forward to when I get back :D

Eventually it's out. One of the best UT04 Mods, the atmosphere effects are incredible. And I really admire the motivation to work on sth. for 7 years. oO GOOD JOB!

This looks so badass.

I heard it was 1 individual, but I could be wrong.
Also heard this has been worked on since 2002?

Yes, One dude made the game and another guy made the soundtrack and its been in production for a looooooong time.

To elaborate further, it was made by one man named Long Nguyen (AKA Chicken+Ribs_combo, and when he started the mod, he started out knowing nothing much about games development or modding at all, to the point where he has created a masterpiece, and believe me, having played only 30mins into this mod, it really IS a masterpiece, it's just so awesome!
I believe it was about a year ago, Long Nguyen partnered up with Justin Lassen, a music author who has worked on several sound tracks, films and games, and he created 25 tracks specifically made for Out of Hell.
So it's still pretty much only a one man total conversion.
He is definately an inspiration and I believe one of about 2 or 3 individuals who have made a large scale mod all on their own over several years. My hat goes off to Long Nguyen, well done mate :)

The name "Long Nguyen" sounds like Vietnamese but I'm not sure :D

Blimey this is looking good.
Curse my slow internet, it'll be a while before I get to play it.

Incredibly cool looking mod with a unique atmosphere. Looks more appealing to me than Killing Floor.
Every time I think nothing else is going to come and uninstal Ut04, I have to reinstal the damn game for something like this! Hopefully there will be that many great mods for the new UT, too!

If you have to compare it to MOD KF, I'd say this mod has superior mapping and environment effects, but both of the 2 really lacked high quality characters and character animations.

Although that doesn't stop them from being awesome.

I didnt know that the UT04 Engine could produce such good graphics!

Been following this mod since the demo, downloading now!

Wow. This isn't dead? In fact, it's just came out? Holy crap! I played the demo of this when it first came out years ago. I can't even remember must about it it was so long ago... So, how's about a few more years to make a full retail sequel to this huh? Funny how I was just reminded of it the other day by someone. Guess I'll have to reinstall UT2k4 again now.

By the way, if you for some reason don't have unreal tournament 2004 you can buy it for ten dollars DLC free on Good Old Games. Gog.com

Or the Unreal Anthology for 2 dollars at GameStop.

i go buy ut2k4 only for this game

Nice trailer! Very atmospheric and cool environments. I love it.

Looks fantastic I'm tempted to get unreal 2004 just for this

Beautiful game. At least the way it looks, the actual gameplay suffers from clunky controls, random drops in FPS (even though they're minor, they interrupt the game and as it stands I have a massive gaming PC, but I think I could blame that on the Game's Engine itself), lack of checkpoints (often having to repeat ENTIRE levels because of one little mistake) and the absolute uselessness of guns (Sorry, I find shooting a zombie 13 times in the skull and not killing him rather difficult, especially when you're so outnumbered) dumb this game to a truly unpolished and not-worth-playing state for someone like me.

Although, amazing work for a 1-man team (or two man if you count the music/sound effects?) Keep up the good work, maybe you'll catch a developer's eye.

Clunky controls? They are as basic as quake, and function just fine. Most enemys will go down in a few pistol shots or a well placed shotgun shot. You must be aiming for the feet if it's taking you that many.

Against swarms you should be using something big, and it really doesn't become that difficult. The levels aren't that long, so checkpoints really don't seem necessary.

The FPS drops aren't the engine, just the optimization and the millions of mesh used. Hopefully in the future there is an update tweaking and optimizing the game further.

I need 3 pistol shots to get a zombie down... with shotgun it is just one. Maybe you confused the skull with the torso. :>

Great work! At first I was going to say that I have to reinstall UT04 because of this but now I regret it. Don't get me wrong, it still looks amazing and everything.. I'm just too much of a chicken to play it.

I was not a real fun of the UT series but I'll certenly get a copy of it for this!Damn, awesome work with this guys,the trailer was kick-assing!

Ok i am downvoted why?Because i misspelled fan with fun or because a UT's fanboy saw my message?Troll.
P.S. I am still sooooo gonna get UT2k4 for this!

This is worth buying UT2k4 easily. Awesome work.

The grain effects won't be whats causing your FPS drop. If you have a below average computer try lowering some settings, and if you have an above average one make sure you disable or tweak settings on it, because old games hate new cards.

DOWNLOADING NOW AND INSTALLING UT 2K4 AS FAST AS POSSIBLEEEE!!!! GAAAAAAH! HAVE TO PLAY THIS NAUGH!

HOLY CRAP, seriously dude, good job on this!
You're seriously an inspiration. This looks absolutely amazing, and the fact that you've made this pretty much singlehandedly is just amazing!

Why dont you make this compatible with Killing Floor?

That killing floor statement is blasphemous...

Why, KF is awesome, i realy dont want to place 5 cd's to install UT2004, but will probably grab this mod if it was released for KF.

AWESOME! Now i finally have a reason to install UT2004 and the trailer is awesome too! GR8 WORK!

What the hell I think my heart stopped beating!

You would get rich if you could sell this kind of dedication in bottles.

i just playd this and by the looks of it, it wont feel at all that this is a mod, feels like a god damn real game and thats amazing, everything in this mod is amazing, but its so hard and scary! please...i want god mode cheat xD

I liked the idea, i imediatly downloaded it, but when i play something makes my FPS drop insanely. when i turn all settings to LOW -3 , it still lags, but just as much as when all settings high +3. My pc should be able to run it at high +3, but something makes it lagg. Also, i have some kind of horizontal pattern all over my view, maybe this causes it? Please help me,

i have the same issue with you man. im hoping they will address this issue soon as i really want to ply this good looking mod. and ffs please block all ways off the map so i dont stumble outside and get stuck like an idiot.

The optimization is not at its best, and being an older engine a new video card wont do you any good with FPS levels. This runs high graphics with better frames on my XP with old hardware, but lower frames at any settings with my newer hardware vista.

Also, once you pass the first level the frames are much better, and continue to as you progress.