Second part of the Ostheer layout! Hope you enjoy it.

Now it is time to bring the second part of the normal tech tree, hope you enjoy it: 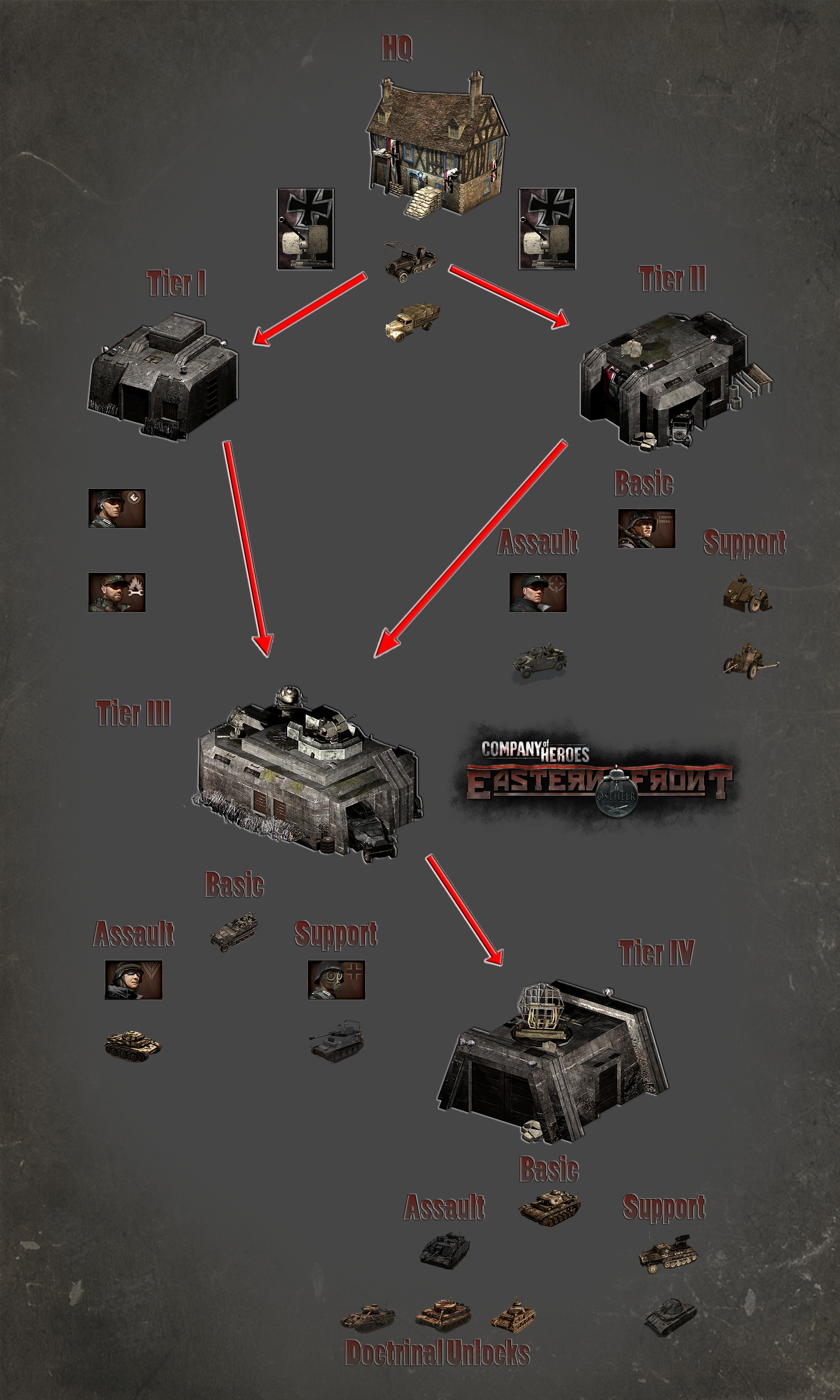 For now we are keeping the Panzer IV in Ostheer, but it might get removed later, this unit is not set in stone.

It all sounds good except Tier 3 seems to me like it's going to force the player to have to pick Support Pool due to a huge lack of AT in the other choice (not to mention it disables the other apparently). The Pak 36 just won't cut it around Tier 3 and after (being a light AT gun, I don't expect much penetration capability or damage).

I have to agree. Maybe make Panzerjager and half-track switch places?

Well, as far as my understanding goes, the role of the Pak 36 would be similar to the role of the PE's Light AT Halftrack - keeping ACs at distance and crippling heavier targets. The actual AT would come from doctrine choices/reward units.

Simply put, when i found myself lacking AT and being overwhelmed by Soviet Armour, i chucked out a trio of PaK36s and used them to push back until the Marder II became available; switching directions quick and easy. Yes, they are weaker vs T-34s, but by that time you can get Marders; plus you can still hold them back with numbers; not too many PaKs needed to make armour think twice.

Ah, that makes sense. I just didn't expect the Pak 36 to perform very well, especially if the enemy starts rolling in KV's. X_X

I just still think it forces players to HAVE to choose Support Pool to be safe. Assault Pool seems to be for more aggressive players (with light anti-tank backup for defensive measures).

Entirely depends on your preferred form of play.

If your an offensive player, you're more likely to choose the Assault Pool; BUT, if your the sort of person that is more likely to use this pool, you're also more likely to be half way across the map, and up on resources and generally hogging down the enemies fuel long before they begin to get armour AKA assaulting all the time; and generally reaching armour sooner than your enemy.
Point being, you're not forced to choose Defence to stop enemy armour; if you use assault you can stop them from getting hands on enough fuel to out tank you.

Ostfront without PaK 40? A joke?

I've been wondering for quite some time now.... why you guys keep pushing about this Pak 40? What's so special about it? You have ton of new units and abilities.. but no, you want PAK 40! Explain to me why does this mod has to have Pak 40? And explain it in great technical and scientific details, so that there will be no room for misunderstanding. Thank you in advance =)

@CadianConscript
I'd like to know as well, what makes this PaK 40 special that we need to change everything to make a place for it.

Ostheer is not a defensive faction, so why they would need a slow AT gun in their ranks? It might fit Wehr but not Ostheer, which is why the PaK 40 was replaced by the Marder II.

I know PaK 40 was the standard AT gun from it's time, but it has no place in Ostheer.

CadianConscript: ..."Explain to me why does this mod has to have Pak 40? And explain it in great technical and scientific details, so that there will be no room for misunderstanding."...

You're kidding me, right?

It was one of the important if not THE important AT tool within the whole war (23.303 units produced - 11.728 units in late war 1944 - more pieces used than of PaK 36 + PaK 38 + PaK 43 together). It's relatively low price of 12.000 Reichsmark, the short production time, it's excellent armor piecing abilities - short: it's great bang for the buck made it a very important if not vital tool against those never ending waves of russian tanks. It's only down was it's weight of 1,4t and the fact it wasn't easy to being moved around by it's crew.

For that reason all those self-propelled versions with it were developed, but it's no secret that there never weren't enough "spare" chassis available to make all those badly needed PaKs movable.

In my opinion the PaK 40 was as much workhorse within the german army as the Panzer IV was... So I really can't think of any eastern front scenario without one of the both of them...

Of course these are just my $0.02 and in the end it's no problem at all cause on my pc they will get what originally had during the war...

But don't get me wrong... The work of the eastern front team is much appreciated and I really hope that this mod is released soon - with or without PaK 40...

@firefish
You have to understand we cannot have every unit that it is symbolic to the Eastern Front in Ostheer because we would end with too many units.

If you want realism about the units used in the Eastern Front, I suggest to give a try to Normandy 44 as well(although they don't have Relic's dmg system).

It is undoubtely than the PaK 40 doesn't have a place on the chart above, but it might be reward unit of something, what do you think it might replace?

'You're kidding me, right?'

No, I was simply trolling you =) I can see your point, but seriously guys so much talk about a single piece of equipment? Also, it is only fitting that should Pak40 ever get the in-game, it should be stationary defense structure. Just imagine how you and 5 other people push a car in 60-70cm of snow and mud. It just doesn't seem like a viable option to me =) Plus, EF is not all about historical accuracy - it's about game balance as well, so having the Pak40 removed is the lesser evil.

@CadianConscript
Indeed, PaK 40 would be slower and stronger than PaK 38 and this is not a good option for an offensive faction. Heck even the Panzer IV is not even guaranteed to survive for the beta.

IMO the PaK 40 might fit as reward unit for the Marder II, although I'm not sure if would be a viable option. Balancers might have others plans for it though.

reward units were nice thing , we need more of these:D

Something I noticed yesterday while watching Riggs' alpha gameplay for the 37th time =) - Legionnaires. They are trained from the HQ, what is their role? Will they be in final Ostheer release?

@CadianConscript
Right now they aren't in Ostheer. But their role were to be support troops just like engineers. They could build defensive stuff like trank traps, barbed wire, sandbags and normal mines.

Sturmovie didn't had anything of that because Legionnaires existed. But as most of the Dev team thinks this unit is no needed and also it only splits the job of the stormpionier, we removed it, so we can test if it works without it but so far it seems to be fine without it.

this looks really, really cool guys. can't wait for it to be released!