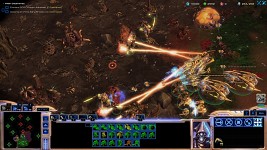 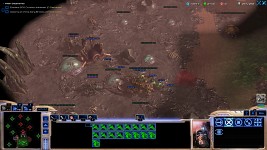 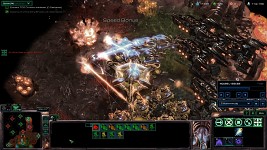 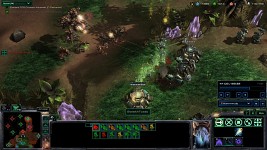 To read the full changelog, including balance changes to subfactions and Broods, please click here!

- The map has been greatly optimized, performance should now be much better than before and the loading time should be much faster.
- Added two new difficulties: Hardcore (harder than Toasty!) and Power Fantasy (easier than Sheepy)
- Added 3 new upgrades per subfaction
- Easy difficulties have become even easier than before, and hard difficulties harder.
- Added command for changing game speed. ("-speed [gamespeed]")
- Added command for removing any potential lag from the Lava Surge event, if it still persists ("-lavasurge")
- Units are now more visible during nighttime.
- Simple Command Card is now forced off and cannot be enabled, due to bugs caused by it.
- Fixed some model bugs (ie: model not appearing, animation ending before it should've, etc).
- Fixed bug: Some weapons did bonus damage to 2 or more attributes, but only applied one of the damage bonuses.

- Removed the two Xel'naga Towers
- Support Powers have once again been changed: they are cheaper and more effective.
- Many unit, structure and upgrade costs have been revised
- Trading minerals for vespene and vica versa now has a ratio of 1:2 for minerals:vespene (from 1:4).

TERRAN GAMEPLAY:
- Mammoth Tank changed to better counter heavily-armored massive units instead of being a splash damage specialist
- Thors' weapon ranges increased by 2 and Thor's Hammer now deals +15 damage to Structures.
- Thors' 250mm Barrage Cannons are now available to all subfactions, not just Odysseus Company
- Warhounds can now use Haywire Missiles against any Armored target. Haywire Missiles' damage changed to 7+3 vs Massive per missile (from 10) and damage type changed to Spell (from Ranged).
- Warhound attack speed changed to 1.5 (from 1.2) and they now deal 10 bonus damage to Massive units.
- Bounty Hunt changed: it now gives resources on kill, rather than on attack.
- Vikings no longer need to stop before transforming into Assault mode - this allows them to transform faster, without wasting time to separate from each other.
- Hellions' attack stats changed to match Hellbats', movement speed also increased to 4.5 (from 4.25).
- Widow Mines no longer receive damage from friendly Widow Mines, and are now properly classified as Robotic
- Science Vessels' Irradiate radius is now extended by the target's radius.
- Fixed bug: Could not pause the construction of Gas Turrets and Grand Cannons.
- Fixed bug: Thors' 250mm Barrage Cannons did not show any visual effects for when the cannons fired.

- Motherships and Mothership Cores are now immune to stuns and slows.
- Carriers can now hold a max of 10 Interceptors (from 8), +5 with Expanded Hangars (from +4).
- Dark Templar movement speed increased to 3.5 (from 3.1) and bonus damage vs Psionic units increased to 35 (from 25).
- Shield Batteries' shield regeneration aura increased to 2shields/second (from 1.6) and radius to 6 (from 5).
- Scout attack speed changed to 1.25 (from 1.6) and they now gain +1 damage per upgrade against Armored and Massive units.
- Phoenix now gain +1 damage per upgrade against Light units.
- Oracles' Envision now costs 25 energy (from 50), but lasts only 20 seconds (from 45).
- Oracles' Entomb cast range increased to 8 (from 7) and it can now be used on-already Entombed enemies to refresh the buff's duration.
- Nexus Stasis Containment energy cost per second increased to 2 (from 1).
- Fixed bug: Was difficult to select Shield Batteries.
- Fixed bug: Nexus' power radius was not shown when a Pylon or Warp Prism was selected, and vica versa.