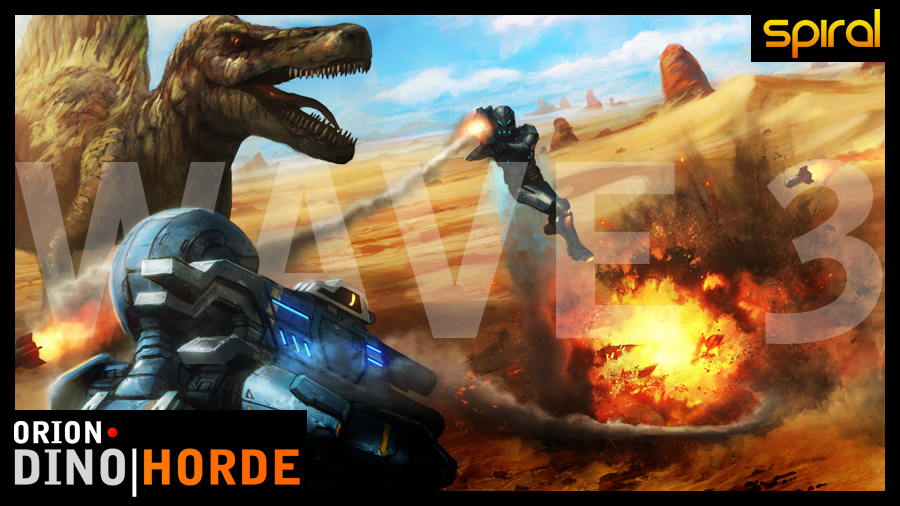 We're adding over a thousand new players to the 'ORION: Dino Horde' Multiplayer Beta and have updated the game build from Wave 2 quite a bit with changes and additions including:

We are getting a lot of questions regarding Spiral Store purchases (hats, armors, taunts) and whether or not they will carry over for the official release / game build. The answer is YES! Now go purchase that Golden Hammer armor and Cowboy hat.

We are also being asked whether or not users can share videos and screenshots. The answer is absolutely yes. You can post any sort of media absolutely anywhere. In fact we prefer it if you report bugs WITH videos showcasing them as it typically helps us resolve them at a much faster pace.

We are going to be announcing the official release date and price (new buyers only) of 'ORION: Dino Horde' on Monday, March 25th, 2013.

We are going to be doing some grueling amounts of testing over the weekend with the new influx of Wave 3 testers. We'll be obtaining all sorts of data and feedback and will be be able to announce more on the start date for Wave 4 next week.

If you haven't already signed up, make sure to do so HERE. You will need to own a copy of 'ORION: Dino Beatdown' via STEAM for entry.

So you have to own Dino Beatdown to be able to help you testing?

Yes. This game exists BECAUSE and FOR the owners of 'ORION: Dino Beatdown'.