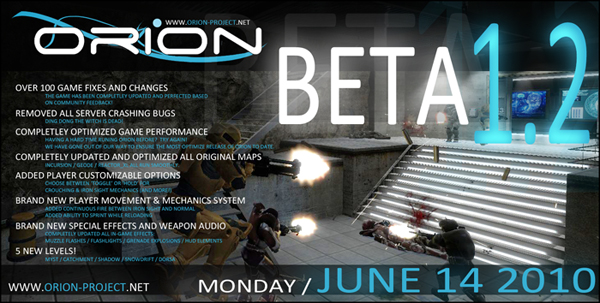 Today marks a very special day for all of us. This has been months in the making but completely worth the wait! We've completely re-shaped the Orion Source Beta. It is light years ahead of the previous releases in terms of performance, optimization, stability, and features. We've gone back and re-worked the entire weapons system, wrote a brand new grenade system, completed over 100 game tweaks and fixes, removed all server crash bugs and added 5 brand new maps!

We are extremely happy to release this and we will be posting updates all week as well as playing with the community. Be sure to visit our forums to obtain exclusive media as well as arranged playtest sessions and more!
Orion-project.net

Here is an up-to-date download mirror list for both versions of Beta 1.2. The two versions are the UPGRADE (300mb) (which will allow any user with ANY previous version of Orion installed to download and automatically update to make there game Beta 1.2-friendly!). There is also a brand new FULL install file (1.4gb) that allows any new users to get right into the action. Download appropriately!

There will be a handful of Beta 1.2 servers available early on this week. There will be two 32-player servers and roughly seven 20-player servers. We will throw more up if required. Here are the current game servers for Beta 1.2 - thanks to Trinity Game Servers (http://newsite.trinitygames.com/)

Orion Source Multiplayer Beta 1.2 also marks the opportunity for Orion to become a SteamWorks release. This would truly benefit everyone as it would allow us to pump out more content for the Beta, including achievements, hats, statistics and tons of other features we would really love to add to the game as well as improvements and new content. Valve is considering Orion for a SteamWorks release based on player activitiy and overall acceptance of the Beta 1.2 release. You can help make this a reality by simply downloading the Beta as well as playing it as much as your heart desires!

Enjoy some of this updated media relating to the Beta 1.2 release! 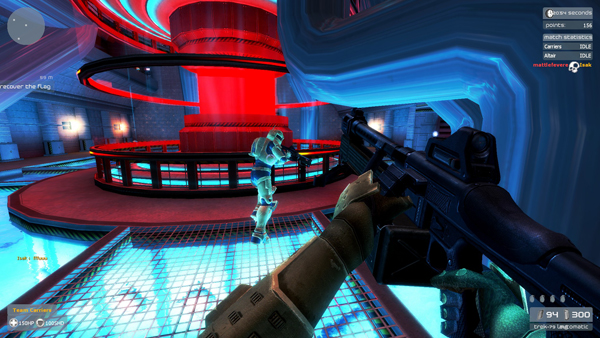 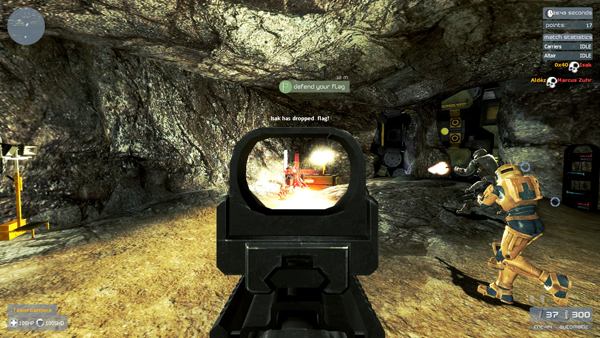 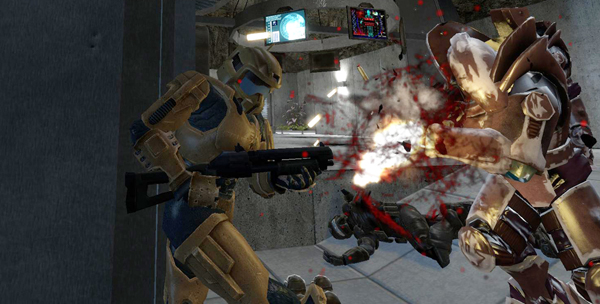 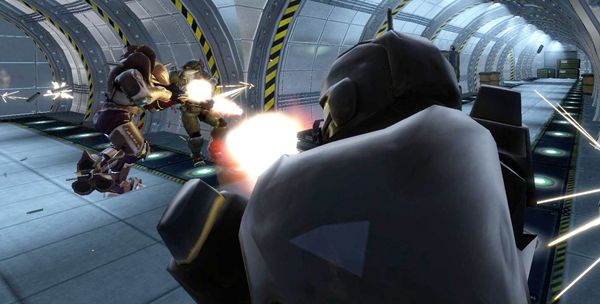 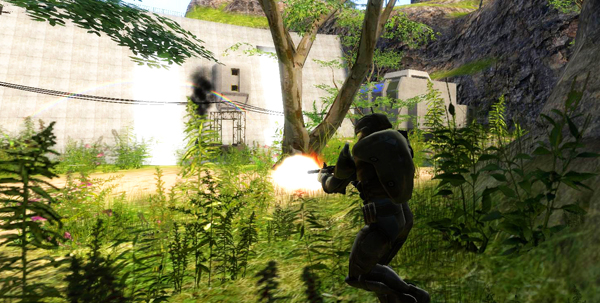 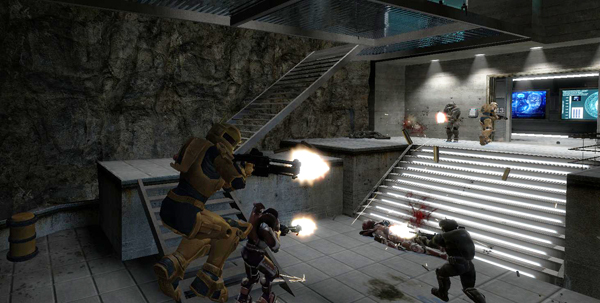 We have gone back and completely optimized all the original maps in terms of performance and stability. We have also ensured the same amount of attention to the 5 brand new maps and we cannot wait to play them with you guys! Here is an up-to-date gallery of all the maps that will be featured in the Orion Source Multiplayer Beta 1.2!

With the release of Beta 1.2, we are going to do everything we can to ensure everyone that wants to play it - CAN play it. The developers behind Orion have put in place weekly playtest sessions that will be open to the public. You can come play, ask questions, diss us, tell us how much you love or hate our game - anything! The details are below:

TIMES:
US Pacific: 10am
US Central: Noon
US Eastern: 1pm
London: 6pm

We are extremely excited for you guys to get your hands on this. We hope to see you at the weekly playdates! Please let us know what you think of this release as well as report any bugs on our forums at:
Orion-project.net

Let's get Orion on Steam!

Yeah!
Downloading as soon as I get home.
Only one thing - could you add the location to the serverlist?

You weren't kidding when you said today

Full install file has the directory set on Jailbreak for some reason. I renamed it to the full filename of the game.

Also, even though I don't see any servers, I end up crashing when I try to spawn after I "Create a Server"

Uh oh, David, looks like you skipped a certain step in that tutorial ;)

This worked, shame we have to do this >.<

I've stated the uploads to the moddb are corrupt - please use a different mirror while I re-upload to ModDB.

same **** 1 hour to download to get a error. i want to kill someone for that

The .exe's themselves are fine. The data sizes on the ModDB links were fine as well, not sure how they were corrupt. Will be fixed by Noon.

Damn it! Quit releasing mods when I can't play them! Anyways looks awesome!

I'll get my server up when I get a chance :3

I get this Engine error everytime I connect to a server.

SDK Base 07 and EP2 installed and inicialized.

Launch EP2 and SDK Base '07 through Steam, then try connect to a server.

As I said, I have already inicialized both of em ;)

Out done yourself again praz, i see. lol

The installer wants to install the mod in this folder:

Sure this is the right game? ^^

When I run the setup file an error pops up: The setup files are corrupted. Please obtain a new copy of the program.

ModDB upload is corrupted. Try another site. Torrent or FTP for instance.

Creating a new installer to fix the file path.

Uploading to ModDB again. Will be fixed by days end.

It ended up having the Jail Break extension because I used there tutorial so the installer auto-detects your steam folder.

come on guys Dl this awesome mod and play!

In the process of re-uploading the Full install with the correct directory and re-uploading both files to the ModDB database due to corrupted files.

hmm any dinos in this update? i distinctly remember someone mentioning dino's (unless it was something else)

Dinosaurs ARE a feature of the Orion universe - however, they are NOT featured in Beta 1.2.

They will be in a future release of the game.

Yaaaaaaaaaaa
wooooo hoooo
now more people (hopefully) will play all day long!
lol
unfortunately my pc broke but i hope ill get it tomorrow...
anyways, HAVE FUN EVERYONE!!!!

It's in the process of re-uploading.

How can you know if you've fixed all the server crashing bugs? Just add a "known" in there so you won't have to overstate your improvements. Maybe just a pet peeve of mine, dunno.

Good work in any case, I hope you get on SteamWorks!

1.2 has been in development since January. Of the very numerous play tests done (David's emails haunt me), not once has the servers crashed in recent months. So I think it's safe to say that the mod itself won't be at fault anymore for server crashes, though the Source engine, server mods and such still might cause a crash.

There is always the change that the game will crash, just like it could in CSS and other big name Source engine games.

However, we have literally done months of stress testing where it's gotten to the point where we can say it won't crash. It's not nearly as prevalent as it would have to be for people to complain about it.

I've been waiting for this for so long; thank you!

Wow, after spending forever downloading this I go to run the installer only to get a "File corrupted" error... totally lame. =/

We apologize for that.

We've just re-uploaded BOTH the Upgrade and Full installs to ModDB. They are now LIVE so use them if you need to re-download. They also have fixed install directories.

We apologize for any inconvenience.

finally got it to start downloading. However it is going to take a while.

are there any EU servers up? i can only see 2 in dallas

:D
See you at Orion guys! And btw, use another mirror, moddb one is slow and sometimes **** up.

I see they got rid of their stupid inaccurate news updates claiming falsely which game is actually required.

played one hour, seems interesting.
I hope more people are interested in this mod. so you can go to steamworks.

I think the moddb links are fixed TRY TO GET ONE MIRROR WITH 90+ capacity i just downloaded Orion in 15 min :-)

MODDB MIRRORS ARE FIXED! USE THEM!