Expanding the number of game options, and exposing them to the player.

If a game has more than one player, there will always be more than one play style and set of needs. In game development it's generally good practice to make features customizable if possible [without breaking or ruining something], and to add optional features that aid usability for those that need or want them.

I enjoy making players happy, so I enjoy implementing options.

A lot of the options found in the 7DRL prototype were added by player request, and now all those options can be seen in a text-based config file. 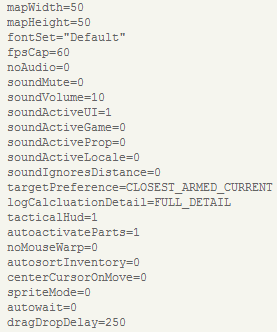 Cogmind.cfg: All these can be changed via in-game commands, except for map view dimensions. Still to implement: In-game options menu with descriptions.

An important new option on the list is one of the best yet: Adjustable map dimensions--you can now increase the viewable map area instead of using the static 80x60 console!

The minimum map size is still the default 50x50, but if you have a large monitor or use a smaller font size and want to see more of the map at once without scrolling around, just increase the width and/or height (the map view doesn't have to be square). 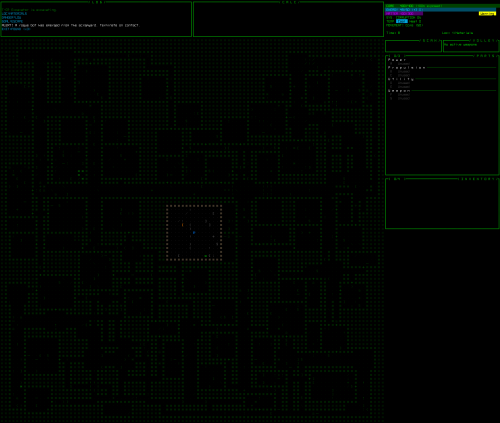 Log windows expand with the map, while extended area below the right-side HUD remains empty for now.

In the test run above I've expanded the view to show an entire 100x100 map, which creates a window even taller than my desktop. Even if you have massive screen real estate, the new Cogmind is going to double the maximum map size to 200x200 (quadruple the area!), which would require a screen resolution of 2300x2100 using the smallest possible 10x10 font... Really though, the default 50x50 view is plenty to work with, since sight and targeting ranges will never extend beyond the edge of the viewable area. Note: Procedural map generation is also in the process of being completely rewritten, so layouts won't look quite the same as what you see above.

Also note that map size is not the same thing as changing the font set to make the entire interface larger or smaller by using characters of different sizes. The final game will include character sets ranging from at least 10x10 to 16x16 (and perhaps larger), so you can play on both large widescreen monitors or small laptops.

One option unfortunately made somewhat difficult to include by the nature of the keyboard-heavy input and how it's implemented is key remapping. So it's not yet possible to do that. However, all commands are mouse-accessible, which alleviates this problem for everyone besides those willing to brave the more efficient full keyboard mode. Converting the engine to SDL2 would likely make the solution easier, but is non-trivial at this point.

Next: We need bigger robots.

Update 5/25/14: The options menu has been implemented in game--see it in action here.