The color of the pen is rrrrrrr.....ROYAL BLUE


For a while i've been playing with colors for the classic menu system to break the hardcoded tradition of red/orange graphics that has been for all versions. The background is animated and I have no new buttons yet. In the screenshot, there's also VoIP support picked up from ioq3 as well. 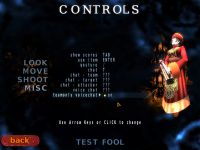 ArmageddonMan on the forums has been mapping for a bit and i've only just recently committed his map pack to the SVN. The map at the top is called Space Contact. Over below that is a joint production between Bozceq and ArmageddonMan for a map called Blitzkrieg 2. 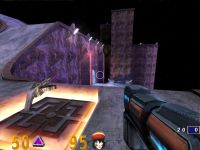 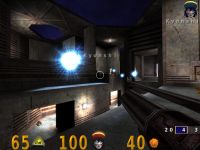 Revenge of the cats

Neko is no longer an Angelyss skin anymore. She is now getting her own player model, hopefully looking great once she gets her joints all figured out. The skin is incomplete to the point there's still no clothing so all I can show here is just a wire view. The double-skirt )one is asymmetrical, the other is just symmetrical, in UV mapping) allows many improvisations to the creative opportunities for skinning. Also (for you pervs) she has the biggest chest in the game which makes her the final new 'mature' model. SHE'S ALSO FROM JAPAN, SO KAWAII =<^_^>= 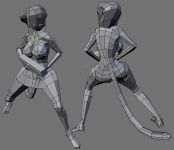 Coming Up Next Week: what the font!!?

You could have used blitzkrieg3 instead. :P It's basically the same, but with better graphics. :P

EDIT: And no Nailgun. (thus I'm thinking on putting it back)

Me a perv? Why, I'm a complete gentleman. Besides, I did not make the thing! You are what you do.

Who am I kidding, I am a perv. Feed me, FEEEED ME!

Nice progress to everyone who is involved!