In this Little Blog we shall explore the concept of the Boldog in Tolkien's works and in The Silmarillion Mod!

The Orcs of the Third Age of Middle-earth are known for existing in various different groups. There are Misty Mountain Orcs, Mordor Orcs, Snaga and Goblins, and the Uruk-hai, each group providing opportunities for a distinct physical appearance and material culture. However, as far as The Silmarillion informs us, there are no apparent distinctions among Orcs of the First Age. There are just Orcs.

This uniformity, while fine from a literary stance, is a hurdle for those of us who are bringing the First Age to the videogame medium. A core part of the Mount and Blade games is the troop trees, providing the player with a wide variety of units with which to build their army. While we can, and have, built a broad troop tree using Orcish troops for Morgoth and Tol-in-Gaurhoth, only having Orcs feels somewhat underwhelming. Therefore, we have decided to elevate a lesser known creature in the service of Morgoth from the pages of the History of Middle Earth (HoME) books and put them front and centre in the unit roster of Morgoth’s legions. These creatures are the Boldogs. Yet, these creatures only appear in the HoME books, and so those of you who are only familiar with The Silmarillion will likely not know about them. Thus, this blog post will go over all there is from Tolkien’s writings concerning them, and our plans for including them in the mod.

The word ‘Boldog’ first appears in The Lay of Leithian, begun in 1925, and it applies to a single character, a captain of Morgoth’s armies sent to capture Luthien, only to fall at the hand of Thingol, and all his army perish.

... A captain dire,
Boldog, he sent with sword and fire
to Doriath’s march; but battle fell
sudden upon him: news to tell
never one returned of Boldog’s host
and Thingol humbled Morgoth’s boast.

The Lays of Beleriand, ‘The Lay of Leithian: Fingolfin and Morgoth; the meeting with Carcharoth’

While the captain Boldog appears only briefly, it seems as if Tolkien had envisioned him to be a greater character, known beyond the confines of the immediate narrative, perhaps a sort of heroic character under Morgoth’s rule, for Beren and Finrod know of him and claim to serve under him.

'Boldog the captain awaits us there
where fires from under smoke and flame.'

'Boldog, I heard, was lately slain
warring on the borders of that domain
where Robber Thingol and outlaw folk
cringe and crawl beneath elm and oak
in drear Doriath…
Boldog he sent, but Boldog was slain:
strange ye were not in Boldog’s train.'

The Lays of Beleriand, ‘The Lay of Leithian: Beren and Felagund before Thû’

As great as Boldog the Captain of Morgoth would have been, both within Tolkien's writing and in our mod, a single character does not help us in expanding Morgoth's troop tree. Luckily for us, Tolkien changed the meaning of ‘Boldog’ from a personal name to something broader.

Only Less Formidable Than The Balrogs

In Morgoth’s Ring, in his musings on Orcs, Tolkien discusses the creatures that the newly awakened Quendi are haunted and hunted by. It appears that Tolkien believed, at the time of his writing these passages, that Orcs were those Elves taken and corrupted by Morgoth, and thus, those creatures haunting and hunting the Quendi were not those Orcs who fought in the Wars of Beleriand, but something else.

But it is known that Melkor had become aware of the Quendi before the Valar began their war against him, and the joy of the Elves in Middle-earth had already been darkened by shadows of fear. Dreadful shapes had begun to haunt the borders of their dwellings, and some of their people vanished into the darkness and were heard of no more. Some of these things may have been phantoms and delusions; but some were, no doubt, shapes taken by the servants of Melkor, mocking and degrading the very forms of the Children. For Melkor had in his service great numbers of the Maiar, who had the power, as had their Master, of taking visible and tangible shape in Arda.

Thus, those creatures haunting and hunting the Quendi were Maiar in shapes "mocking and degrading the very forms of the Children". This particular phrase is used in The Silmarillion to describe one theory of the creation of the Orcs.

Yet this is held true by the wise of Eressëa, that all those of the Quendi who came into the hands of Melkor, ere Utumno was broken, were put there in prison, and by slow arts of cruelty were corrupted and enslaved; and thus did Melkor breed the hideous race of the Orcs in envy and mockery of the Elves.

The Silmarillion, 'Of the Coming of the Elves'

Therefore, those creatures are Orc-formed Maiar. In fact, Tolkien explicitly confirms the possibility of such creatures in another essay on Orcs, telling us that the least of the Maiar in his service may have taken the form of Orcs, albeit much more powerful.

In any case, is it likely or even possible that even the least of the Maiar would become Orcs? Yes: both outside Arda and in it, before the fall of Utumno. Melkor had corrupted many spirits - some great, as Sauron, or less so, as Balrogs. The least could have been primitive (and much more powerful and perilous) Orcs.

Tolkien connects these Orc-formed Maiar with Boldogs, although he is, as ever, hesitant to definitively state the truth regarding Morgoth’s creations.

Boldog, for instance, is a name that occurs many times in the tales of the War. But it is possible that Boldog was not a personal name, and either a title, or else the name of a kind of creature: the Orc-formed Maiar, only less formidable than the Balrogs.

While Tolkien never confirmed the presence of Orc-formed Maiar among the ranks of his legions (“The least could have been primitive… Orcs”; “It is possible that Boldog was… the name of a kind of creature: the Orc-formed Maiar”), there is certainly enough evidence to suggest that he seriously considered it to be possible, if not even probable. Certainly, there is enough of a precedent here for us to include Boldogs in our roster for Morgoth’s troops and not directly contradict the evidence, such as Dwarves riding goats…

A Force to be Feared

As Tolkien says, Boldogs are “much more powerful and perilous” than Orcs, and we really want to convey that in our representation of them. Orcs themselves are not very large, and in The Fellowship of the Ring there is “a huge orc-chieftain, almost man high” (‘The Bridge of Khazad-dûm’), and so we have envisioned Boldogs to be taller and more powerful than those normal Orcs. One could imagine them as the Uruk-hai are to the Orcs of the Misty Mountains, and we drew our inspiration for the physical presence of the Boldogs from Bolg in the Hobbit films. It is our hope that when players meet Boldogs on the battlefield they will be towering figures of muscle and metal, ferocious enemies, greater than any of the lesser Orcs. 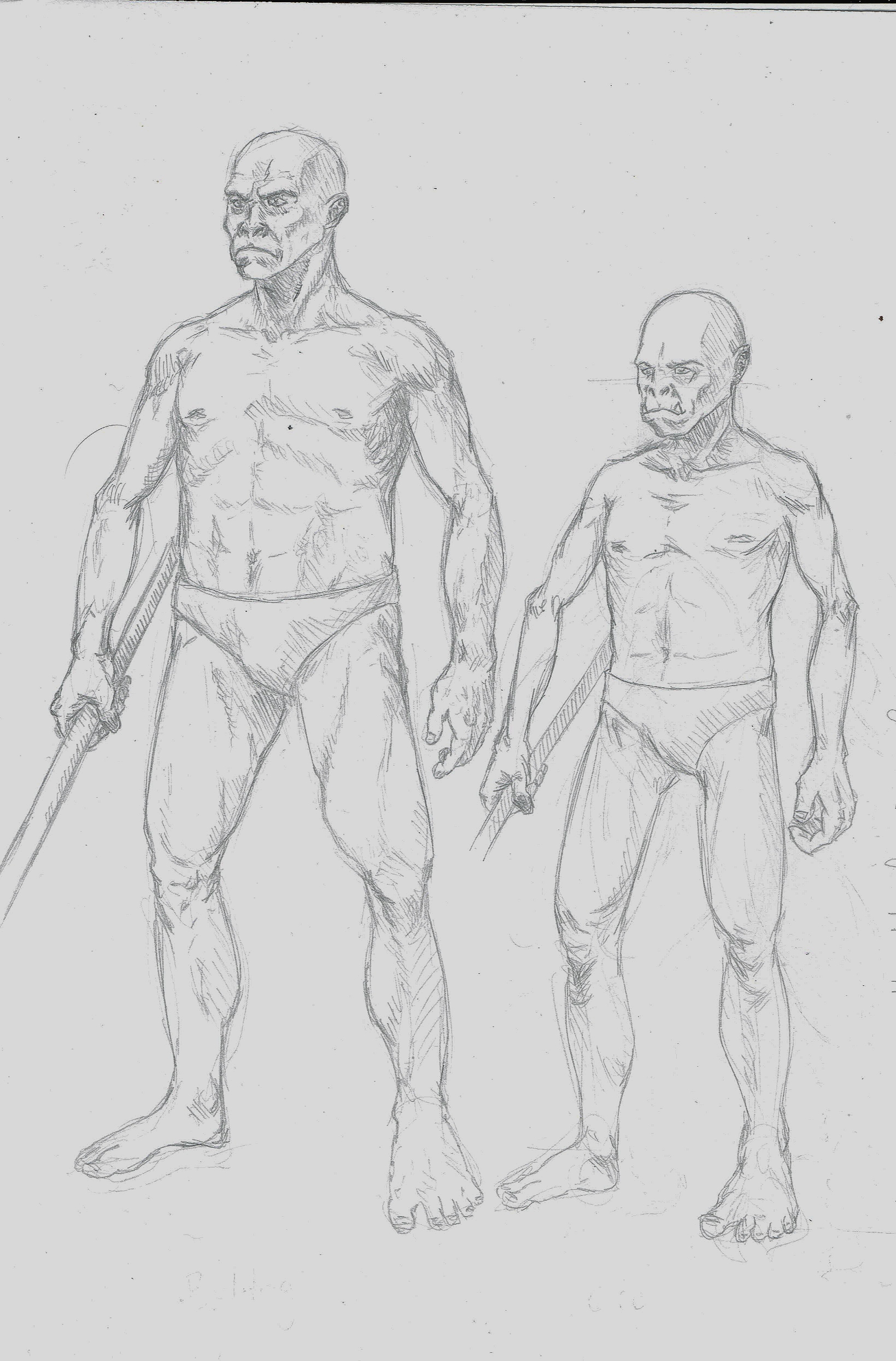 To match their formidability, we have decided that the Boldogs should occupy the greatest tiers of Morgoth's troop tree, with their own branch independent of those of the Orcs. However, Boldogs are only the greatest of Morgoth's lesser creatures, there are other creatures even more powerful and perilous...

If you enjoyed this discussion of the Boldogs and our exploration of Tolkien's writings join the discussion in our Discord!

It is always nice to see updates from you guys. This mod will be amazing when you finish it. Best of luck!

Thanks! Your appreciation means a lot