Post news RSS On the horns of a dilemma

This week has been a bit of a blur. Finally got a build together and out to a few people. Mainly just compatability testing, but still it feels good to finally ship SOMETHING to do with the game. But it really has brought to the forefront an issue I've been banging my head against for a while.

This week has been a bit of a blur. Finally got a build together and out to a few people. Mainly just compatability testing, but still it feels good to finally ship SOMETHING to do with the game. But it really has brought to the forefront an issue I've been banging my head against for a while. The issue is whether to keep on with production using my own engine, or to switch to Unity before we go too much further into development.

Now I'm very well aware of the pros and cons here. But either way, its still a hard decision. My engine architecture is a lot like Unity (in that I use gameobjects and components), so technically the port will be reasonably easy. The bigger issue is more about that loss of control, in that I couldn't necessarily just port my game to a new platform with a Unity version. I'd have to wait until they decided to support whatever platform it was. On the upside, I'd be able to buy into more platforms more easily.

The real clincher here, is the sheer number of larger games that are starting to use it. What with the kickstarter craze funding all sorts of Unity engine games (like Dreamfall chapters) it would seem churlish of me not to at least reconsider that path.

Of course Unity doesn't actually have all the technology I need. Specifically the thing that's really been holding me back has been the lack of dynamic (i.e. run-time) pathfinding solutions. I need players to be able to build arbitrary geometry and have the AI pathfind around it. But I have to consider the fact that I still need to write that functionality either way. So the reality is that whichever way I decide to move, I still have that hurdle to cross.

So yes, Unity usage is back on the table. Mulling it over still.

On the upside, all this programmer naval gazing hasn't stopped artwork production. Valentin is on with texturing the first ship, a simple baked AO map version of the ship here: 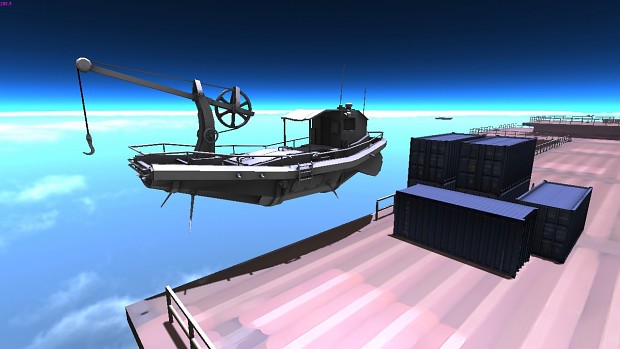 Lance has been working on developing some more concept work. He did this quick rough for me to try and practice modelling the "heavy" character type. Mainly I'm just going to go through the motions of modelling the guy and getting a zbrush sculpt together for him. I think we're actually going to end up having to model some basic mesh and do morph target and texture manipulations on them (ala MMO character creator), just to keep the art budget under control a little. I'll get a professional artist to do those meshes though, because I should think they'll be quite challenging.

Here's the orthographic concept for the heavy worker Lance worked on. 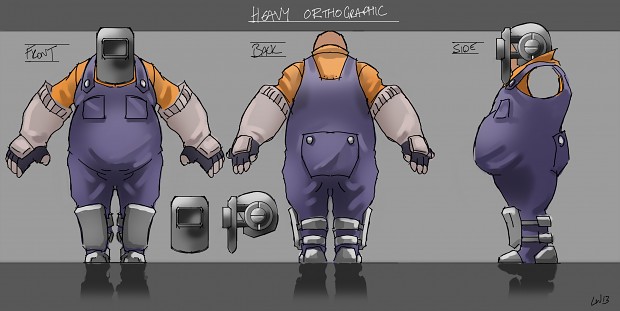 The other thing Lance has helped me with this week has been the "power gauntlet" concept. The gauntlet is our vision of how the various building tools will be represented. Rather than using a set of "first person style" weapon/tool models, the plan is to use a single "gauntlet" style device, with a rotating disk which denotes which mode the gauntlet is in. This cuts down on the modelling budget and means that adding more modes is easier (simply changing a few textures and updating a UI element). 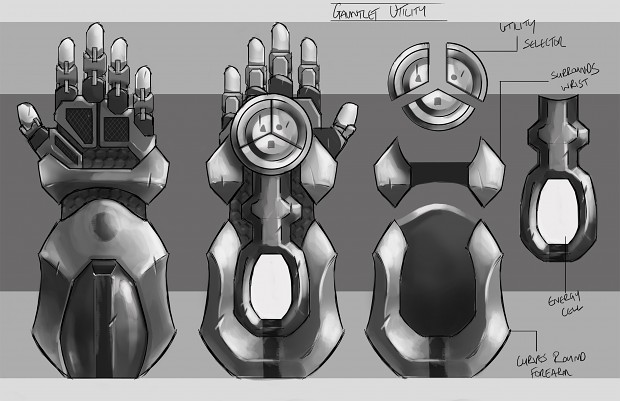 So there's been some progress in terms of artwork and a few people starting to test. But ultimately this week has been one long headache. The Unity issue is really a thorny one, because to compete with other Unity engine powered games visually would be hard, plus at least there's a community with Unity development. But man losing that power to be self directing is really hard.

Awesome progress. Really like the Concept art and the work on the ship. Looks nice!