After two years of development, it is time to see what has changed during the making of Prisonscape.

It's been a little over two years since we started making Prisonscape. Even though some of the main elements have remained, a lot has changed, too. Let's go through some of those changes! First of all, in our early blog posts we wanted to make a game very similar to Chrono Trigger in gameplay. A lot of people argued that the open world mechanics of CT wouldn't go very well with closed prison space and they were right. Me and Tuomas are both big fans of Chris Avellone's games and especially the Fallout series.

Eventually we started getting a lot of inspiration from them, including the tactical combat (more about it here, here, Prisonscape.com and here). Second thing we did pretty early in the development was simplifying the gaming mechanics - we reduced the amount of basic statistics to Strength, Agility and Intelligence (Fitness, Mental Health and Charisma were removed) because including all of these would've been too much work.

In the beginning, we also hadn't hired an artist. That's right, I was doing the art, and it really shows in this screenshot: 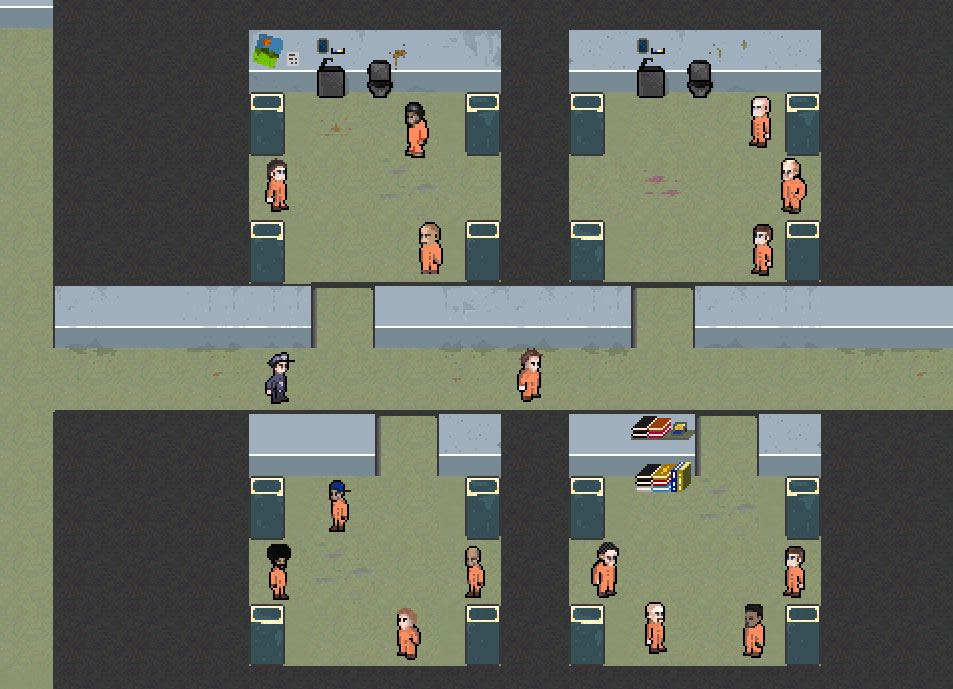 After that we hired David and the game looked immediately much better (and got tons of more attention from people, too!). With graphics, we learned the hard way when we used mismatching pixels for the UI - David drew these AMAZING UI's but we ended up scrapping them because they just looked... wrong because of the mismatching pixel size. 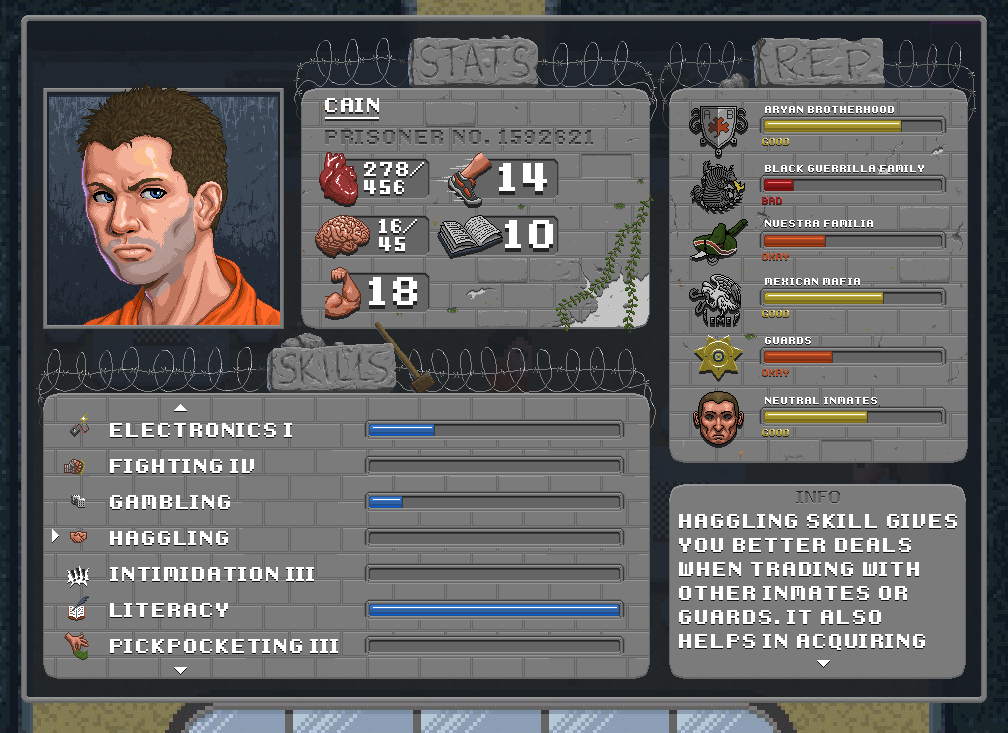 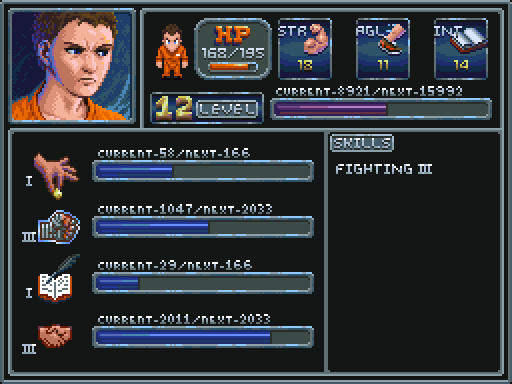 New UI. It looks fantastic, too.

Initially we also shunned the idea of experience and levels. But after thorough playtesting of the first area we noticed one very important thing about Prisonscape - it was boring as fuck. It had no sense of progression and it was basically a walk'n'talk simulation. Reputation and items didn't give enough sense of accomplishment while playing, so we decided to add the leveling system. There's a reason why it's used in almost all RPG's. I also changed the storyline a LOT. The first idea was that the game would consist of episodes or levels, so you would start in a minimum security, escape from there (easy) and eventually end up in max and try to do the same thing there. There was a LOT of branching, which would've been way too much work in the end.

Oh, and in the first design document we planned so that the player wouldn't see any of their stats, but just an indication of it ("you are in good shape"). We also reduced the number of gangs from 9 to 6. We also planned several minigames (rewiring the alarm system, playing domino's, etc.).

What have I learned during these short two years:
- Don't use mismatching pixel sizes!
- Even smaller tasks can take a lot of your time
- Working fulltime drains a lot from you and hinders the game development
- Don't be afraid to show your game to people, even the spoiler-y parts
- Start building your audience early on
- Also write some technical blog posts/reports, people are really interested in them
- You can't force writing dialogue. Sometimes you can't get shit done, even if you have all the time in the world

Happy new year, hopefully it is the year when you can finally play Prisonscape! ;-)

I found your post an interesting read, it's really interesting to hear about how your game has changed over the last two years- In my opinion it's a very fascinating process how ideas change and a game gets molded over time.
I like what you wrote "Sometimes you can't get **** done, even if you have all the time in the world!" - I couldn't agree more. I usually compare it to a sort of "writers block". A lot of times I have a lot of ideas, but I just can't sit down and get them out. Sometimes it is important just to get away from the work, and do something else. - Keeo up the good work!

Thank you! It was very fascinating for me too to look at your old plans and documents and see how differently you saw things back then. And I agree 100% with your comment about doing something else every once in a while.

Definitely. I usually make videos of my progress, mostly for myself, and use it to inspire/encourage myself if I lose focus. Kind of a way to see how far I've come since then :-)
Anyways - Looking forward to the progress on your game- It looks really interesting :-)

I think the idea is really fun :) looking forward to see this in action ! any release dates or announcement details ?

(Again) Maybe you think i'm just a troll but can we have more update about the game please ?

0 news in one year... how far are you from finishing the game ?