Of Guards and Thieves update 62.0 is now available! This update include lots of stuff, 2 new game mode, 6 new classes, new weapons and gadget and more!

Of Guards and Thieves 61.2 Update Overview

Here's the complete changelog for 62.0 update:

In this mode, there are two teams (Blue and Red). There is a time limit of 5 minutes at the end of which the team with most points is the winner.
Each team have to defend their own Flag and must steal the enemy Flag to make points.
If at the end of the 5 minutes teams have the same score, the game will switch to "golden flag" phase: during this phase the first team to score a point wins the game.

igCTF rules are the identical to the normal CTF mode, the differences are the presence of the same class for both teams and daylight illumination.
* For more details, see the information about instagib (IG) gamemode.

Tips about CTF and igCTF 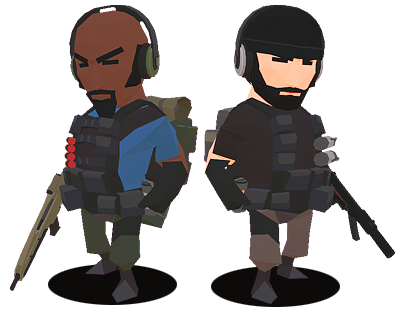 The Carrier (Guard) and the Saboteur (Thief) are two new classes with an ibrid Support/Assault role.
They are equipped with two new main weapons, the XN8 automatic rifle and the NP5 Kompact SD submachinegun.

Here the stats for the respective classes:

Incendiary Grenade and Molotov are very useful gadget,
use them to slow down your enemies and to block crucial ways in the most 'appropriate moment.

Again, thanks all for the support and see you in game!

..or Play directly on your web browser on Kongregate. and Join our Forum to take part in the development!