Another step closer to release as I've finished "ol_styx"

Today I finished the last big area that needed to be done, which brings the level closer than ever to finished. I have about a day or two left of work on it (minor stuff that doesn't change the visual outcome of it). Next week I will make the top-down minimap image for it which is still quite some work. This week was spent on polishing all remaining details and getting performance up as much as possible. I managed to squeeze out another 10 to 20 frames per second in some areas without loosing too much detail. Some of the work I've done this week is:

- Made the disco frontal: Empire
- Made the frontal / upper part of the tunnel (big red sign area)
- Made antennas and rooftop structures to finish off some of the buildings
- Cluster more objects and set up fade distances
...
(a detailed list can be found on the forum)

I've now posted these images straight out of Half-Life² in full screen 1920*1080, which I'll do from now on for all images. 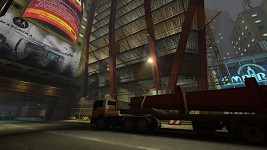 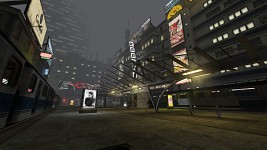 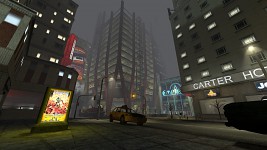 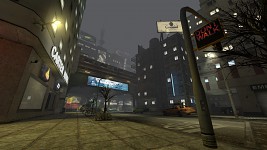 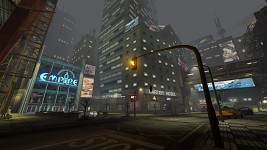 Some other exciting news is we are also setting up a new playtesting server (finally), so expect a limited open beta period soon!

I still don't like the fog.
Yeye, I know it is there to keep the framerate high, but you could achieve the same with a good skybox which gets you better looks as well.
Everything except the horizon is top work, for sure.

I've had the same comment from someone else as well, I might still add a skybox next week.

I just finished the map, I also added a skybox as I mentioned and I made it an animated/moving sky.

This has gotta be one of the nicest source maps out there.