For the game Home is Where One Starts, I always hoped to add VR support since the experience lends itself to it quite nicely, but I didn't think it was feasible. However, I'm excited to share this story with everyone with Oculus support. 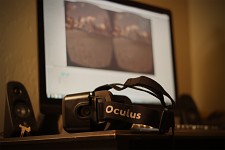 I always hoped to add VR support since the experience lends itself to it quite nicely, but I didn't think it was feasible. However, after much experimentation, I think it's possible to incorporate Oculus Rift support when the game is released. It's crazy how VR changes everything we've learned about UI, game controls, and motion sickness. Fine-tuning alone would take months, so I hope to release the Oculus version as an added bonus to the experience for those who own a DK2 (or DK1... I don't know how well the backwards compatibility works with Unity). It will admittedly be rough (think beta), but I will make sure it at least works.

It's quite amazing walking around the world I created, and actually feeling like you're there. It adds a whole new dimension to the narrative and emotion, which is why I believe this is worth the effort. Let's hope the motion sickness doesn't kill me first before it's all finished!

Home is Where One Starts... Adventure
Related Engines