A brand new devlog for Occupy Mars: The Game has just dropped in! 🚀 Read about our team's recent progress on the game. 💪

First of all, we apologize for taking so long preparing this update. Some of you have been worrying about development slowing down. We’re here to let you know that it’s absolutely not true!

Just as this devlog is being created, our Occupy Mars dev team is working hard on various aspects of the game. 💪 As such, it’s difficult to dedicate this devlog to one certain milestone. Instead, we have decided to give you a detailed overview of what our team members have been up to during this time.

Let’s start with necessities: our Sound Designer has been filling in the gaps of our sound design. Sounds of walking and various other sounds that had been missing from the game are now being steadily added or improved. Sound plays a major role in Occupy Mars, as it not only contributes to Mars’ desolate atmosphere, but also serves as an important feedback to player whenever he’s interacting with the game world. There is also another new feature in the works which has a huge impact on immersion (pictured below), we’ll be able to tell more about it in the future devlogs. 🤞

Another one of our team members has been working on the ground detection system – it’s a task closely related to sound design and makes it possible for the game system to recognize different types of ground and associate it with a specific sound. In other words, with this detection enabled, you’ll be able to hear different sounds while running on sturdy rocky ground or your base’s metallic floor.

Animations have been improved. Various new ones have been added, while existing ones have been polished. We have also managed to fix many bugs on our way. One of the most notable ones would be the kneeling issue. Basically, it was easy for player to get stuck when trying to stand up in a place where standing up shouldn’t be possible. Animation speed and transitions between crouching and standing state have been improved and an obstacle detection system has been added to make sure the character won’t struggle while traversing through these tiny lava tunnels. 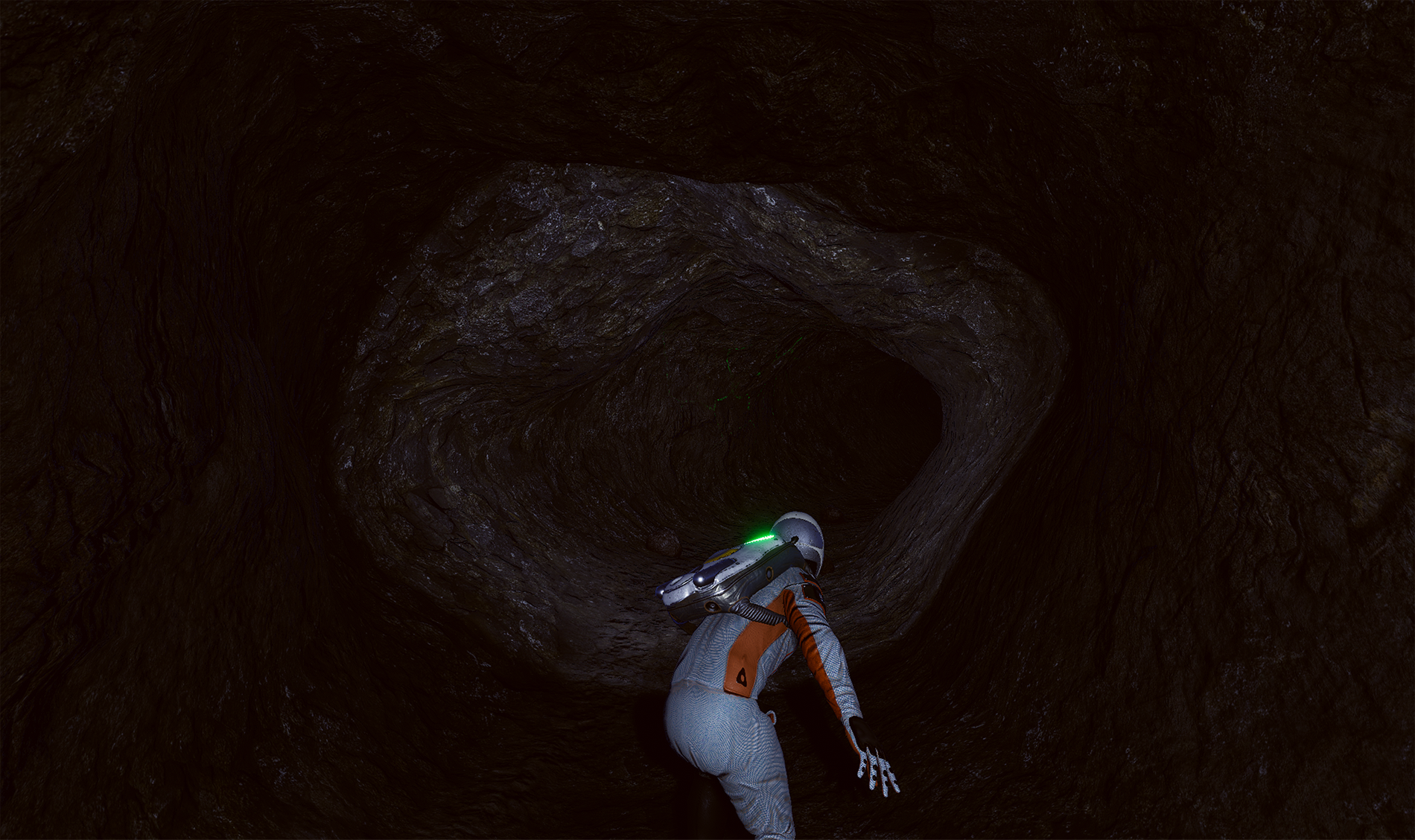 Another very helpful, albeit difficult to illustrate addition to the game is a pathfinding system based on machine learning. Basically we teach the artificial neural network how to navigate the martian landscape, which then navigates it like a car or a robot would in real life. We decided to take this step due to the long time it takes to generate standard pathfinding solutions on the procedurally generated terrain. In particular, it’s useful when it comes to this little buddy: 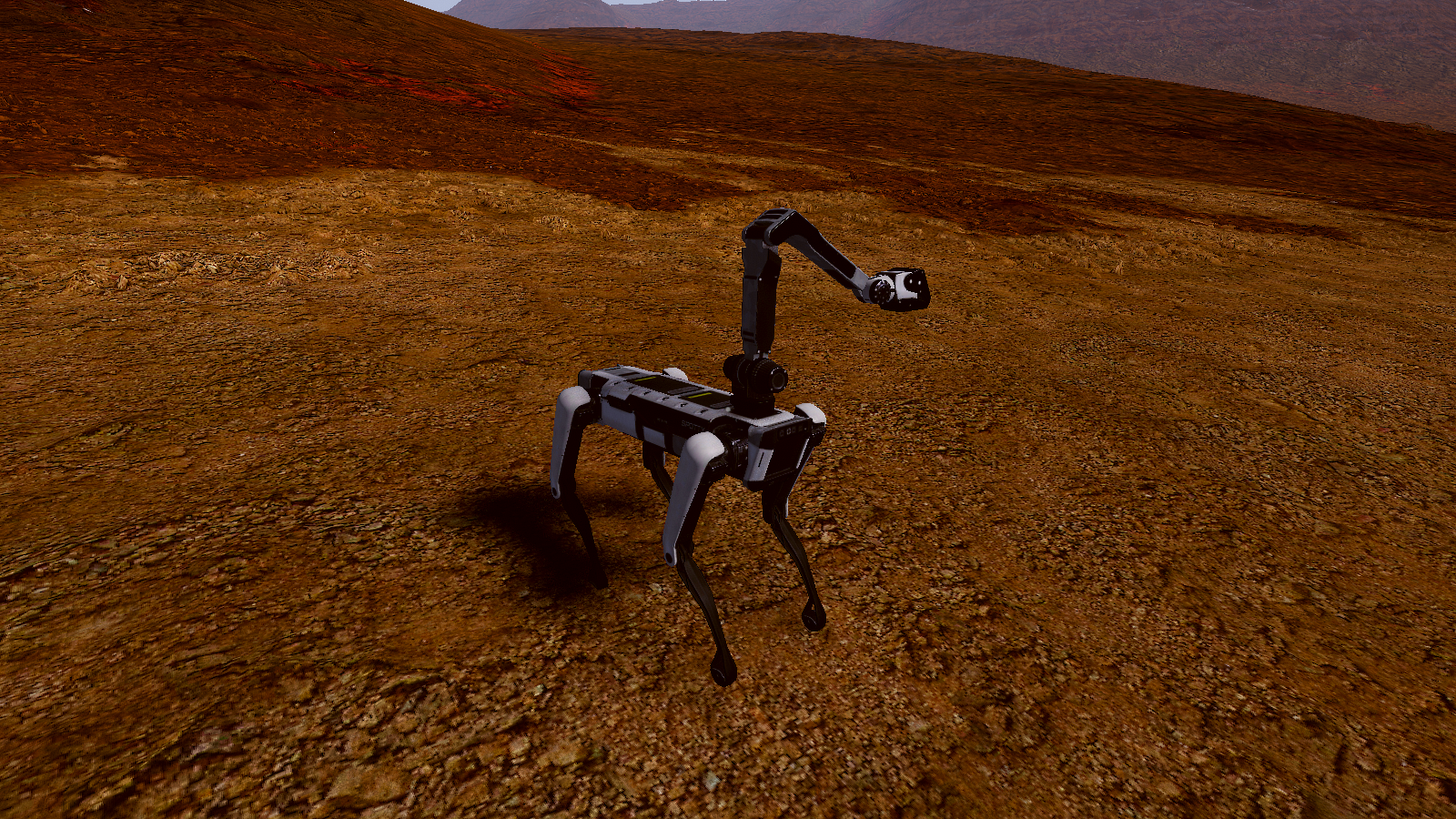 Do you remember this little fellow? 🙂 We’ve been working hard to make him a reliable company during your adventure on Mars. Many new commands are currently being included to make Spotty as responsive as possible.

Our team members have also been working on expanding the game’s world. New locations have been added. Other than well known rocky landscapes, you’ll be able to explore places filled with snow and ice. There will be various deserted bases scattered across the Red Planet. You will be able to explore them, see remains of what used to be home to astronauts before you and tear those remains apart in other to gather more resources. Even if their mission has ended, they can be a great help to you! 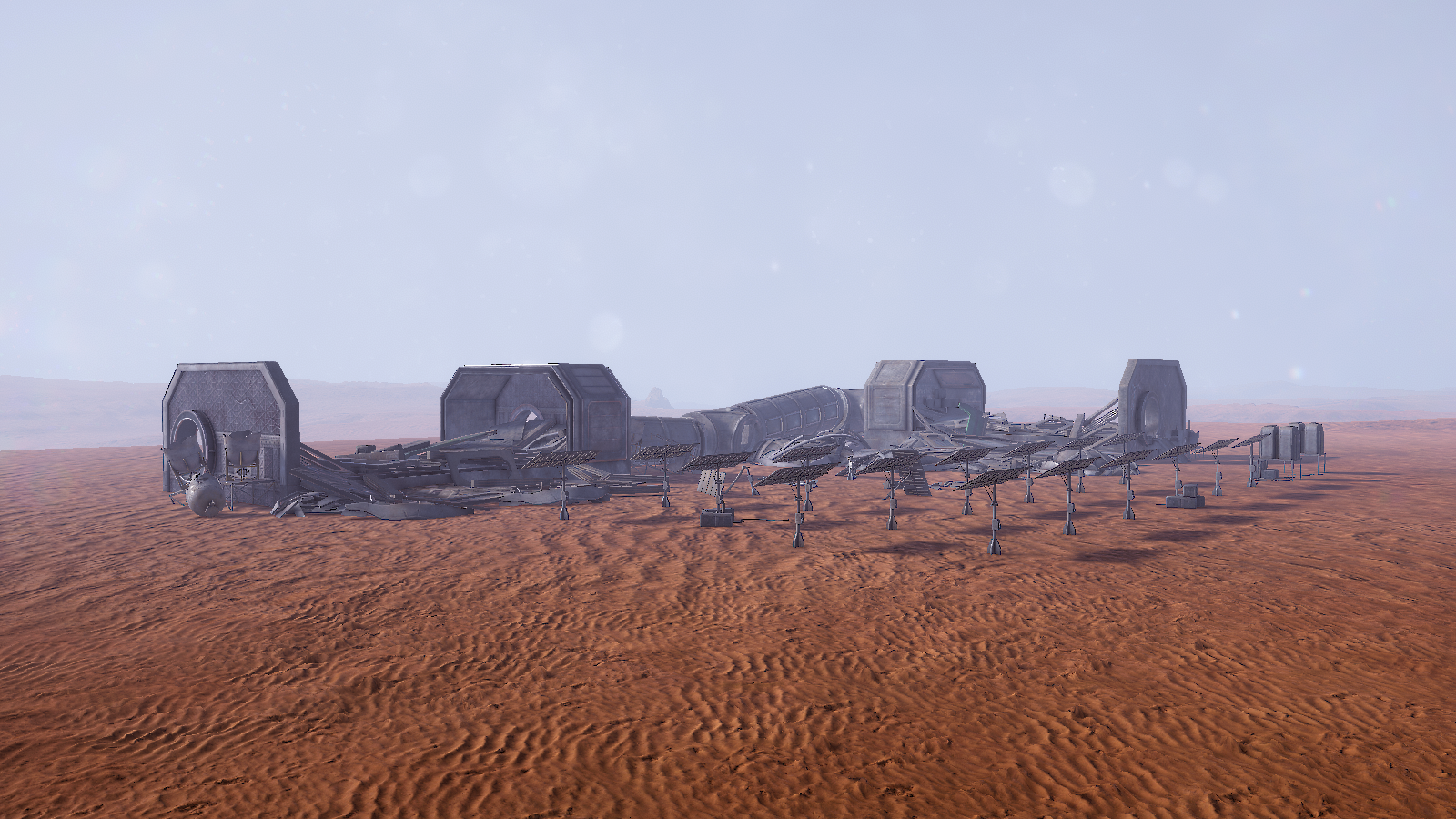 With so many places to explore, will you be able to see it all? It depends on you, but we’re making sure to provide you with all the tools you may need! Another team member is currently working on a flying version of Ingenuity helicopter, which will allow you to peek into places that would normally appear inaccessible. Make sure to charge him first, otherwise he won’t fly far. 😉 Drone’s batteries are charged with solar energy when on standby and can additionally be charged by the player.

The Rover Controller you may know from the Prologue will become a general use Remote Controler for many different vehicles - such us the helicopter. 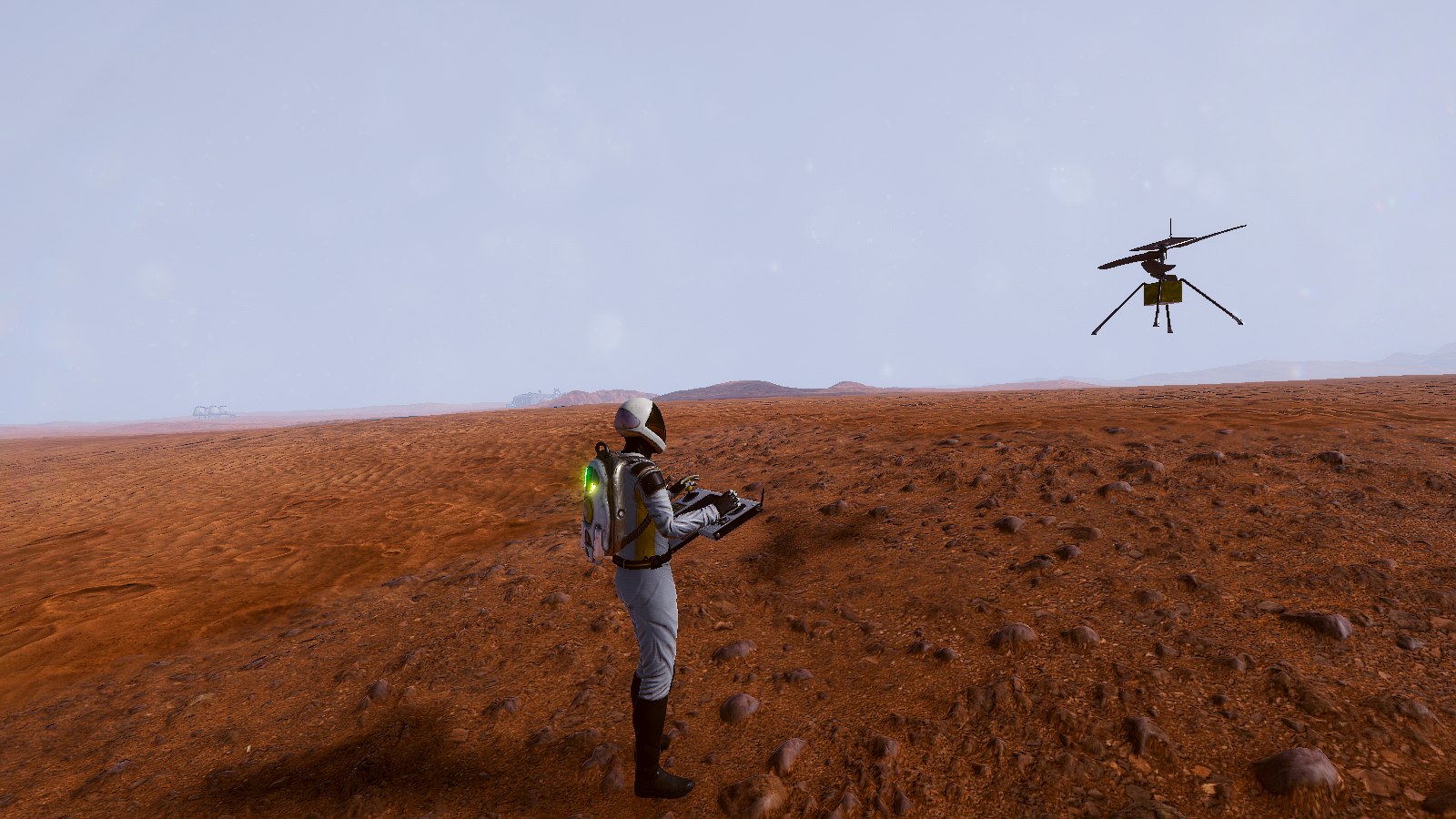 Speaking of vehicles, our team has also been working on heavy rover’s driving system to make it more intuitive and enjoyable.

And now last, but definitely not least, we’d like to show you a new vehicle that’s being worked on: 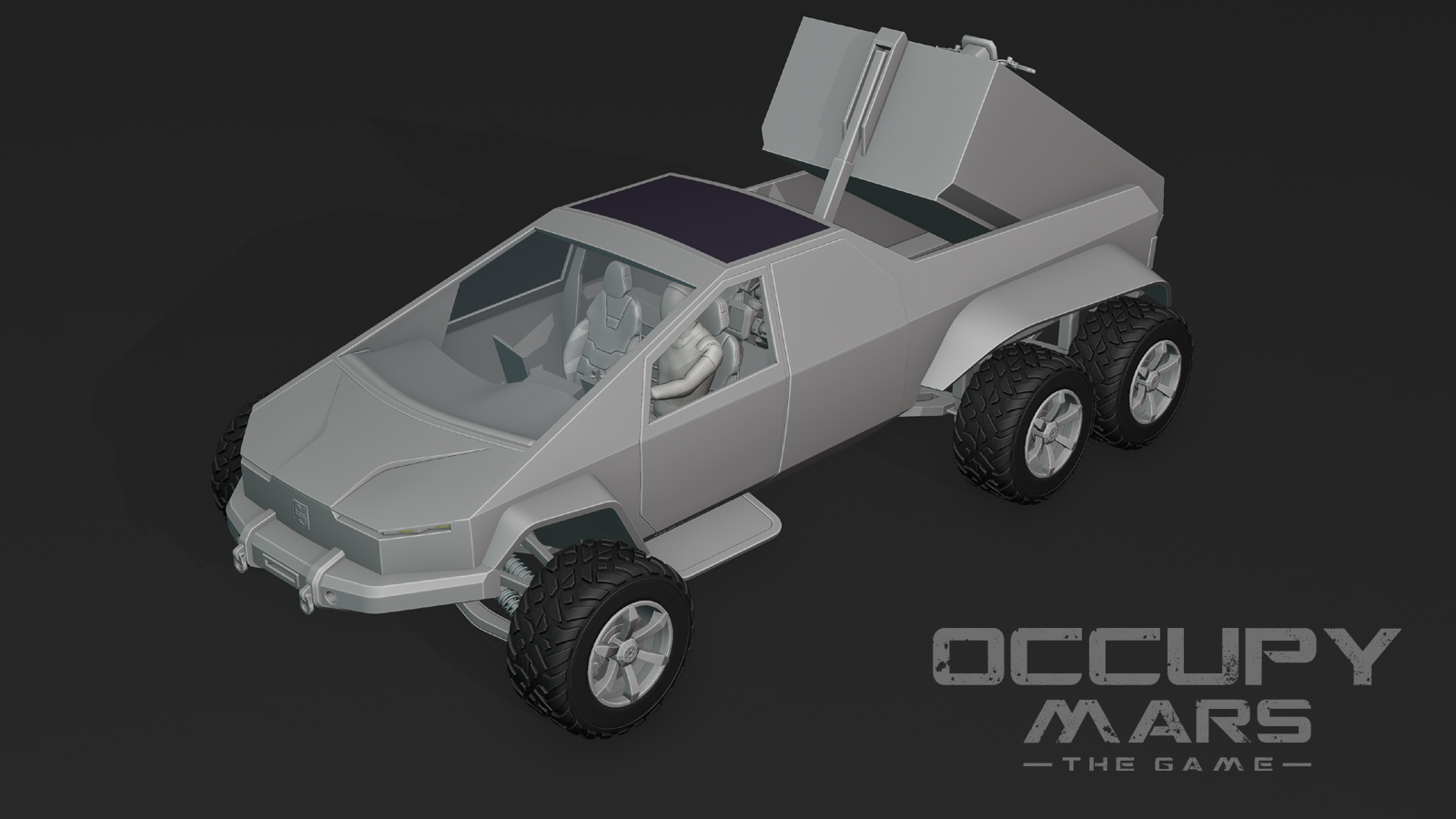 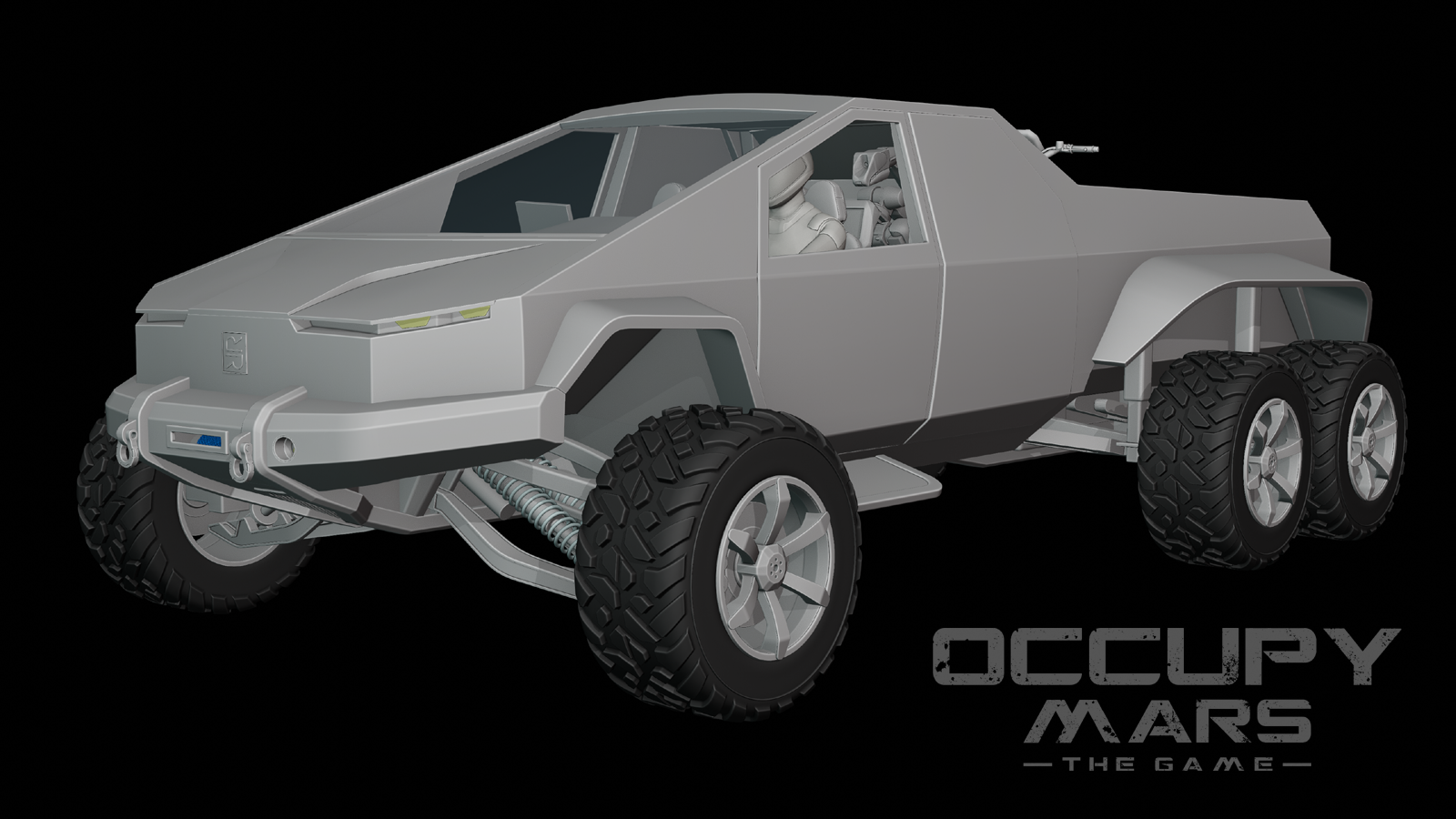 Here is a message from our team member who is in charge of this new amazing vehicle and who wanted to tell you a bit about it himself. 😊

Hey, guys! Recently, I've been working on a new vehicle, which – I hope – will close the gap between Heavy Rover and light ATV Quad. At first glance it seems like it’s just Offroad Cybertruck, but don't be fooled! Because this is MarsTruck, an offroad pickup and i have no clue why you would call it otherwise ( ͡° ͜ʖ ͡°). Okay, I guess You might guess what served as an inspiration for bodywork ;). It's offroad pickup with AWD and a small amount of regolith carrying ability. It has 2-3 seats and a place for Spotty companion. It also has enough space for inventory or an additional battery extender in the frunk. Offroad suspension (double wishbone at front, and independent on rear) and big wheels will get you to places that are hard to reach on foot or with other vehicles. I hope you’ll have as much fun riding it as I have creating it right now!

That would be it! This devlog turned out to be surprisingly lengthy, but we hope that gave you a good idea regarding our progress on the game. Occupy Mars is a big project and one that will definitely take us a while longer, but it gives us a lot of joy and we can’t wait to show you the end results.

Please bear with us a bit longer and if you have any suggestions for us regarding the game itself or anything else, do let us know on our Discord server, Steam forums or anywhere else! Every new game is a new learning opportunity for us and we’d like to do what we can to make this waiting time more manageable.

Add the game to your Wishlist to make sure you don’t miss any news regarding Occupy Mars!

Thank you for all your support so far!