I have been away for a while, but I’m now back and making loads of progress again.

I have been away for a while, but I’m now back and making loads of progress again, since the last update there has been the addition of an animation system that allows for death and infection animations to be played showing the transitioning stages as a human erupts into a zombie or when chunks of gore are thrown from a body after a powerful shotgun impact.

The animation system itself is fully implemented but the additional thousand or so sprites that need to be designed and drawn out will take a fair while, until then there are some placeholder animations that at least show that the system is working but they look a little jumpy as they repeat frames which was done to make the placeholders faster to produce, this of course will all be rectified when the animations are redone and will likely involve a redesign of all the AI and player sprites. In particular when rotated, the sprites can look a little bit pixelated but with a combination of anti aliasing and intelligent redesign of the entity sprites it may be possible to entirely smooth it out.

Objectives And Deeds
Right now I’m in the middle of developing the objective/deed system which will expand the currently limited gameplay from being basically run away from or kill zombies with some occasionally collecting of weapons of ammo. So the idea behind the system is that if you are surrounded by an ever changing dynamic world amidst a zombie apocalypse then the gameplay should incorporate as much interaction with the world as possible. Objectives are currently split into two main categories of deeds which are typically smaller requests or interactions often initiated by one of the AI and also larger over arching objectives that incorporate a bit of story and are generally more involved and come with potentially large rewards.

So far the larger objectives are yet to be added but the core of the deed system that hinges on smaller interactions with AI is implemented. So for a few examples, when civilians are being chased by zombies they have a chance to initiate a save me quest, this is quite simply a case of the AI calling out with the new speech bubble system that they desperately need your help. If you are successful then for now the reward is a simple thank you. Additionally police officers have a chance of asking for a weapon which means that now instead of being limited to just a pistol if they request a spare weapon, you can deck them out with shotguns, machinguns or go nuts with flamethrowers and RPGs at your own risk. This quest has no direct reward but the benefit of having better equipped humans is obvious and something I intend to put some focus on in future deed quests. There are plenty of other ideas for these deeds waiting to be added which will include lab coat civilians asking to be taken safely to a hospital with the potential to provide you medical attention as a reward or a simple quest in which a civilian with some spare ammo asks you if you can make use of it.

The aim of the smaller deeds is to put more emphasis on the importance of protecting as much of the human population as you can, humanising them when they ask for help or increasing their value with potentially reward giving quests. 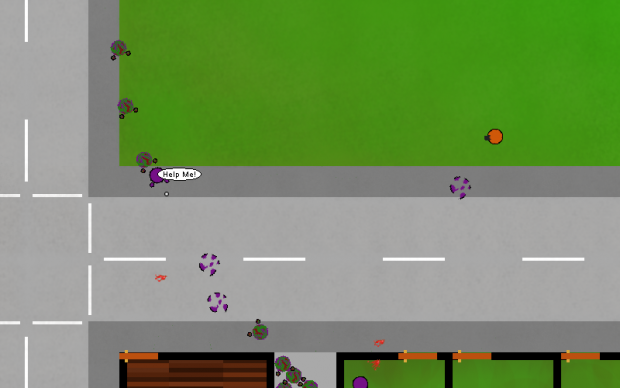 Persistence
Work on adding more persistence to the world is also taking place, in particular the bodies of fallen humans and zombies now exist permanently which complements the new death animations very well. This both makes the combat more aesthetically pleasing and provides lots of information into how the infestation has impacted an area. Ultimately I would like to have bullet holes and cracks of lifted up concrete from explosions showing up, with additional environmental weathering effects that would occur in an unkempt city, like overgrowing tufts of grass and maybe encroaching wildlife not dissimilar to the film I Am Legend.

So sometime next week there will probably be an update and another accompanying news update that covers what’s new in the updated build. Most of the new stuff will be the animation and objective systems but there will hopefully be time to make other additions, in particular I want to add in a menu system that will allow you to rebind your keys which will probably replace the current instructions menu.

Keep up to date on development news by following me: @ZombieFluidGame.