Nudo is released. It's like a platformer on top of a rubiks cube, you can shift stuff around or something!

Nudo is released. It's a free puzzle/platformer where you shift levels and think laterally for a while. Here's what it looks like: 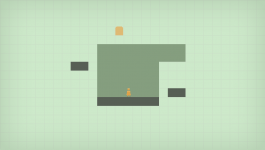 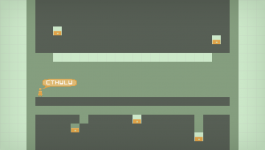 The game looks brilliant, I'm downloading it now. It seems like a very interesting puzzle mechanic and I love the simple art style.

I'll probably be doing one or two videos of it for my friends YouTube channel, is that alright?

Sure, there's no problem with the videos. Thanks for trying the game!

Fantastic gameplay, the only thing is the name, that in my language means "naked", it sounds too strange for me to call a game like this.
Good job for the rest.

well the little orange dude is naked, so ....

That wasn't really what we were going for with the name; it was more an allusion to how bare the gameplay mechanics were. Also, "nudo" in Spanish means "knot", and seeing how it is a puzzle game, we thought the double-entendre was pretty clever ;)

Simple but in a good way. I love games like these, I'll try it out later.

Amazing game I have really enjoyed what I have played so far I hope you keep making more like this. Any tips for level 13? =D

Nice! Downloaded, played it, and loved it.

This game Is amazing! Love It :D

This is really cool; I'll totally download it soon.

I just played it and I can honestly say that this is a fantastic game. The concept is works surprisingly well and it feels very fresh, which is no small feat considering the huge amount of indie platformers available. An important part was the fact that I always felt like I was coming up with an original puzzle. I never got the feeling that I was solving the levels using predetermined solutions. On top of that it's got some very fine graphics and music. I think the lovely menu screen deserves a special mention. I could watch that thing for hours ;)

I'm glad you enjoyed our game. Thank you for trying it out!

Excellent puzzle game! I appreciate the flexibility, so that unlike other puzzles this didn't feel 'linear'. There's definitely a greater sense of accomplishment when you can accomplish things your own way. A fresh, fun, sometimes confusing game mechanic.

They this is an excellent game, have you ever considered convert it the source code into XNA C# and having an xBox 360 version?

We are looking into ways of reaching more people, so the project is not dead by any means. Thanks for playing!