Posted by fathomthegame on Jul 6th, 2015

This week on the abyss stares back at Devin: Interviews, paint jobs, and my old friend Oculus. 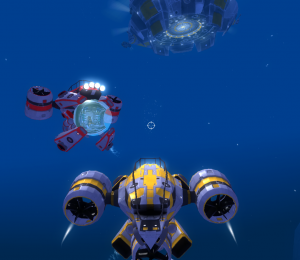 So I skipped blogging last week because of the Fourth of July and I had huge plans wi… Basically I just didn’t feel like it. Might as well be honest here. I did get some Fathom stuff done though.

First off I set up an interview with an internet gaming journalist Elijah Beam. We’re going to provide him some game footage, and he’s going to cut it together with our interview. I’ll put a link somewhere on the site when it’s ready. I’ve been trying to use these interviews as practice with talking/promoting Fathom, but I’m starting to realize I’m not so great at it. I think I’ve gotta refine my 1-minute-pitch. On the plus side, it should be pretty hilarious to hear how many time I say “Ya know.” May end up being a really good drinking game if for nothing else.

Joe updated the Blackshark DSV with a higher res model & fancy new paint job, the pics I have scattered “artistically” around this text. 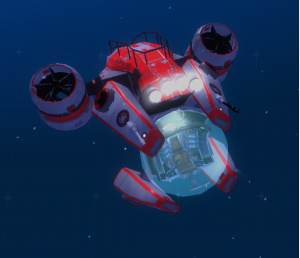 Unity 5.1 was released recently, and one of the features listed was fully integrated Virtual Reality support. Now, I spent some time a while back integrating the Oculus Rift into Fathom using Oculus’s “Unity Integration” package. It DID work, albeit it seemed a little awkward. I think the direct mode worked about 50% of the time, and extended mode kinda worked… but was so ass.

So I tried using the new Unity built-in OR support, and while the head tracking seemed to work pretty much right away in the editor, I couldn’t for the life of me understand what it was doing with the UI elements on screen. The GUI overlay would whip around the view super fast like it was on some merry-go-round from hell, and was effectively unusable. So I spent a few days sulking and telling myself how shitty the OR support was, until I decided to read the documents a little more closely. Turns out, the OR support wants to have exclusive control of ALL Camera components’ orientation and position, which is exactly what my camera controlling script tries to do. So basically the OR support and my camera controlling script were fighting each other about what direction should be facing.

Long story short, I had to rewire my camera script and the entire prefab for camera control I created, such that my script controlled the camera’s parent, and the OR support could control the actual camera itself. Luckily it wasn’t that much work. And it all seems to work pretty well now. Stable, consistent, better (Papa Johns).

That’s all I got, or at least that I can remember. Till next week-ish.