It's been an utterly insane couple of months of work here at Unknown Worlds and tonight many of you will get your first game of NS2!

Important before playing: In order for you to play, you'll need to redeem a Steam code that enables the Special Edition black armor and grants you access to the alpha. We will be e-mailing you these codes and instructions at approximately 6pm PDT (GMT-7).

You may be able to download NS2 before you get this e-mail, but you'll get an error message if you try to play before entering this code for the first time. You will only have to do this once and it's only for the alpha.

Note: If you haven't gotten your key yet, you can get it fast by going here.

It's been an utterly insane couple of months of work here at Unknown Worlds and tonight many of you will get your first game of NS2!Two weeks ago, when we announced our plans for releasing the alpha, we knew we had a ton of work to do. But we also knew that most of the core game was working, we just had to pull it all together. We've been working so hard for so long on this game, we just knew we could do it. 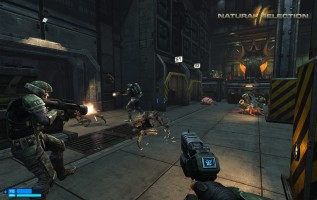 Tonight you will get the first play of what will ultimately become Natural Selection 2. It is crucial that you know that this is an alpha and it has problems. Our hit-registration has major problems which we were unable to fix in time for tonight. We had to pull the "crag" at the last minute. Skulks can't fit through some vents. Lerk flight doesn't feel right. You might see some dev textures in places. Performance still needs work. So it is not without blemishes, nor did we expect it to be.

Releasing an alpha at this stage is a pretty different model then what the "big guys" would ever consider doing. This isn't like getting the beta of TF2 a couple weeks before it's released. This is getting in on the game when normally only developers would see it - we've even put in the ability for you to give feedback directly into the game and we hope you use it.

However, we do believe it has the core essence of the game in it. There are marines and claws and commanders and resources. Players take on a variety of roles and attack the enemy while jabbering away over their microphones in beautiful, atmospheric sci-fi environments. We wouldn't dream of releasing a game at this state to the public, but we insist on releasing it to you, our die-hard supporters. We are doing this for a few reasons:

So what you will play tonight doesn't have a lot in it. It definitely does not have the gameplay that NS v1.0 did. There are only a few weapons, aliens, stripped down commander role and one map. But we think it will serve all the purposes above, and serve them well. 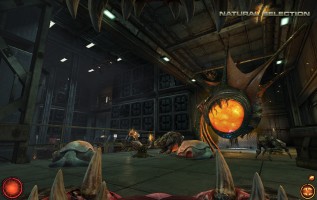 It's with this in mind that we ask you to be kind and generous with your feedback. Of course we want you to be honest too, but we want you to realize that this is only the very first version, of many many versions to come. We released dozens of versions of NS1 and now that we're on Steam, we expect to release even more of NS2. We expect to ship a new version every week or two, all the way through alpha, beta, v1.0 and afterward. NS1 had a long life and we expect NS2 to do the same.

This is the beginning of a long and rewarding journey, and tonight, we all take the first step together. We hope you enjoy playing as much as we do making it.

add a pre-order for steam and announce retail in stores then my pants will be shat.

I have yet to get this game to work online. Every server I connect to it just says 'Attempting Connection'. Oh well waiting for next release <_<. Also the game is extremely laggy.

I think that's because the server is full, try a server with an odd number of players. I read this is already fixed, but I'm not sure if it's updated yet.

Congrats! It's great to see this game come back into the spotlight again as a sequel.

Nice! I'm looking forward to playing this game. The Alpha came quite suddenly and as a surprise.

Laggyness will be an issue, as it has been in the previous releases. I expect it to be solved. Same goes for the audio bugs. And if you cannot connect to a server that's probably because those are no permanent servers, but just people who log in and set up their own game. I expect everything to work just fine, in the end. Patience, once more. A great game is nearly here!

So gonna pirate this :D

NS1 lasted years. I'm pretty sure NS2 is worth $20, unless you want the Special Edition (which allows Aplha/Beta Access). NS2 is only going to be more epic.

Sure they have issues now, but like they stated, "...we want you to realize that this is only the very first version, of many many versions to come."

How cheap are you two??

prolly not worth pirating.

19.99 for a full multiplayer game, with long term developer support?

I have it..but I haven't been able to play it yet because they haven't released the connection patch yet. :|

Also so you guys know..it's no longer $20. The standard edition price went up to $35 after the alpha dropped.

yah i preordered the limited edition (the expensive one) and its broke to the point i cant even play it. And i am not the only one their forums are filled with others with this problem hopefully they can fix it soon so i can join the pwnage.

Will there ever be a free weekend for this?

i'd love to pay for this, helps for them to order servers and to work on the mod, i don't mind price, this has earned money imo.

i cant even find this on steam besides the old one

As soon as i can play anything, i will spell some other words here. The team rushed to make an alpha and created all that hype about the price and the black armor but nothing works yet. The client is full of lag, from the graphics to the network, the interface is incomplete and even with the recent patch we get lots of "unknown error" messages. I KNOW this is alpha, i was expecting for this since i am a developer but LOTS of people wasnt. The hype was unecessary and now they are getting bad comments from many sources.

Hype was overdone I think as well. However alphas are alphas. Crash bugs and unfinished bits are to be expected.

Its part of the reason why I dislike alpha testing :P ( I have said before.. I have been in a few.. they are such a pain.. yet to see one that was smooth. Betas are a diff story though. )

wtf is that disgusting looking crustacean thing in screen shot one? Hope its not a DC

that crustacean thing is probably the pod that the aliens view model when they are evolving.

For some people on pirating indie-games.
Pirating commercial games is already a crime, but pirating indie-games decreases the chances of the devs getting paid for their hard work, this game will be worth the whole price, if you don't want to spend money, just don't pirate it god damn.

I never understood how people can justify pirating? Do you also just walk into a store and steal a game, movie, or CD? Because that is exactly what pirating is, pirating is stealing, it's against the law, and is morally wrong.

If I pirate a game because there's no demo, and if I don't like the game I delete said pirated copy and stop playing it completely, is that justifiable?

I got Overgrowth at a very reasonable price, because I pre-ordered. A couple of months later I got NS2 for free, due to the indie game pack. I think it's great that developers validated a copy of either game to those who pre-ordered.

So I got two games in the end, and from the Alpha you can already tell that Natural Selection 2 will be amazing. Even though it's an Alpha a lot of things like wall-walking and flying work better than in most full games, already.

The best thing is there are still about 50% of the game in development and we get to watch a game grow and see how the professionals handle their bugfixing. I'm also amazed that a team so small can create a game of this quality. Only texturewise things could be better (environments and characters look exactly alike; no materiality).

Its mod or game?

I think you need to learn what the definition of mod is. Natural Selection 2 has been in development for like 6 years and it has its own custom engine called Spark Engine. This is anything but a mod.

then i do believe this should be on indieDB

I don't understand people ranting here. Maybe the developers don't answer all questions, but these guys have their hands full, at the moment. They can't entertain the community and make a game at the same time.

I remember Empires mod, public beta. The game rubberbanded so badly it was hardly playable and research didn't seem to make a difference, etc. Empires mod drew a lot of inspiration from NS, so the two compare. What Unknown Worlds deliver in their Alpha is a very promising outlook on what could become one of the best online multiplayer games since Team Fortress; (I leave out L4D, because L4D is not about teamplay, it's about staying alive and reviving.)

So, in respect of the deep gameplay mechanics which already show in the Alpha and all the features that can be implemented, I must say that Natural Selection is a killer game. One of the best mp games I will see in my life.

So shut up your ranting against it, buy the game and support Indie Developments like this one. The team stood by its game for the better part of a decade and pulled it off against all odds, even programming their proprietary engine. That alone deserves our great respect, but the fact that this is really an awesome, incredible game in the making should make you cheer even more. There is love in this product, people.

I miss the shadows for players :/
Should be something the engine supports without any problems...

The game is great, but too bad there is no single player.i never said i don't like multi player, but...

i pre ordered but the alpha is very buggy and laggy