NOWHERE Alpha 38 is now available for players who are preordering / alphafunding the game. As usual, you'll find the new download on your account page. 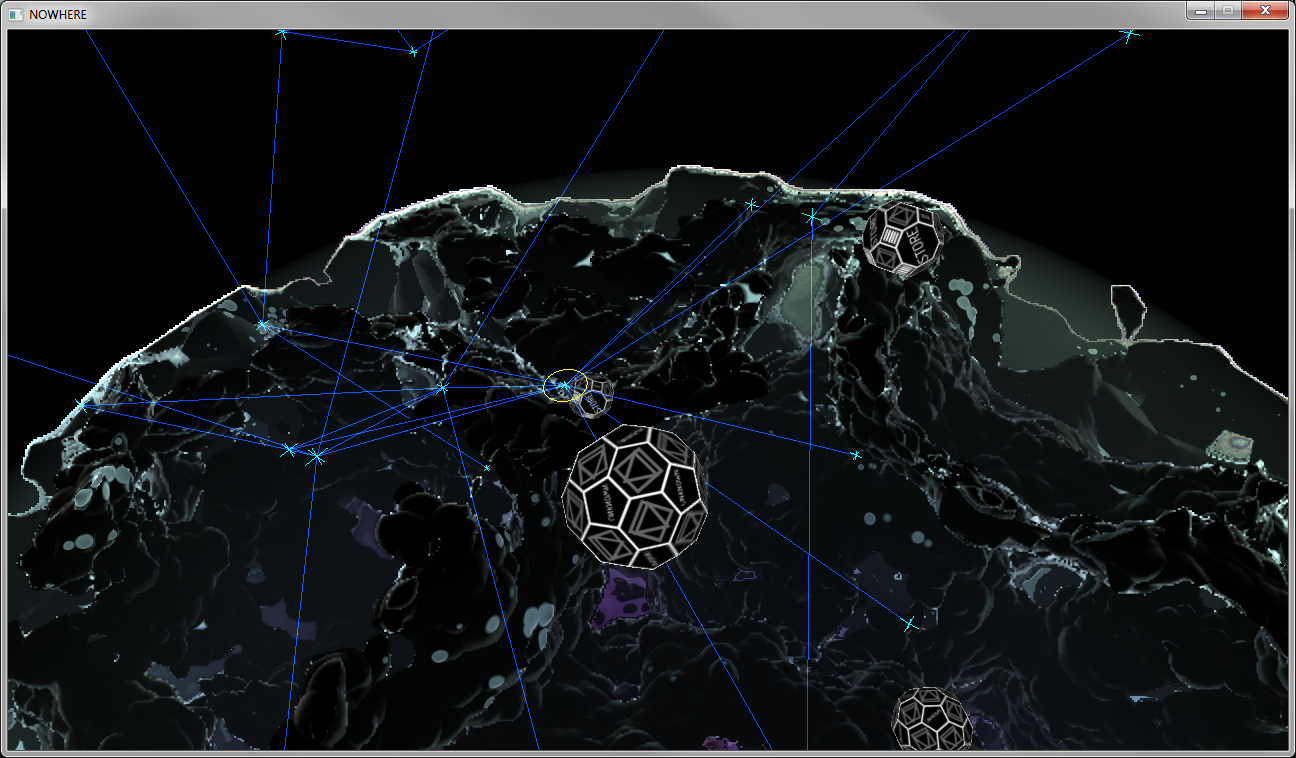 A Windows build is available. OSX and Linux build will follow soon.

- Initial Drone AI: drones spawn from a startpoint and begin to build a network of pathways through space. This is the earliest incarnation of the clockwork drone society that will unfold in subsequent builds.
- After an in-depth revisit of our story and gameplay concept, the building mechanic has been taken out completely.
- There is also no more gravity. You are always freely floating with six degrees of freedom.
- The colors of the environment have been slightly dimmed.
- The rocky planet will change layout with every launch.
- A fog issue has been fixed.
- The Windows builds are now based on Portable Python rather than PyPy, because PyPy's support for Windows x64 is currently lacking. As a result, the crash bug is gone. The game performs well, and might return to PyPy once the JIT problems are gone.
- Exiting to the menu and re-starting the client will now work correctly.

- Linux: On dual monitor setups, the engine may not recognize the screen resolution correctly (a problem caused by SDL missing support for an X11 feature on Debian). Therefore, the launcher script explicitly starts the game in a 1280x720 window for now.
- Linux: The build is for 32-bit systems. Some 64-bit platforms do not provide 32-bit support libraries out of the box. 64-bit Ubuntu e.g. requires the ia32-libs package to be installed, which is part of the official repository.
- Post processing FX have been disabled because they grab the screen and therefore perform badly. They will be replaced with better, framebuffer-based implementations.
- Missing Feature: 3D sound. We use OpenAL but sounds are currently not attached to a location and will appear to emanate from the center of the screen.
- Missing Feature: fades. This needs to be done at some point ;-)

- Once again: Work is now spent in driving the backstory forward and rearranging the gameplay around our new terrain techniques, starting with populating our space with the sentient swarm AI. The sentients are not hostile, but they inhabit the world, and interaction with them is a key element of the gameplay.