This is the November news update for Iron Europe. This month, we are introducing two new team members, and showcasing some of the new content we have been working on.

Hello Everyone, As you may or may not know, November 11th marked the 91st Anniversary of the Armistice in Europe, bringing about an end to The First World War. Since that day, people around the world continue to mark November 11th as a solemn reminder of the sacrifices of the young men and women who went overseas to preserve freedom for their people. And those that still uphold those values today, and are overseas as we speak, fighting for you. Putting their lives on the line.

Let us not forget the sacrifices of these brave men and women. Please, if you know anyone who is currently serving, or has served in the armed forces overseas, honour them. Use this one day to show them how much you appreciate the privileges and freedoms you have today, that they defend.

Work continues as normal for IE. October and November have been good to us so far. We have two new members to introduce, Miro! as he's known around here, is our new texture artist, and our other new member is WillB, who's work you can see a bit below. 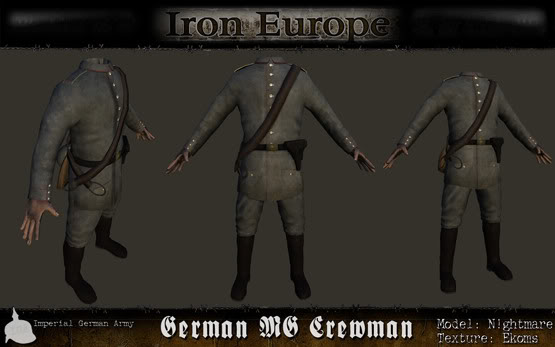 As you can see, this will be our German MG crewman for our 1915 maps. We try to take as much care as possible when it comes to uniforms. They're much more complicated then they first appear, especially the German ones, Different tunics for Prussia and Bavaria, different cuffs and button arrangements. There's also the fact that uniforms changed some much after the first year of the war, and continued changing in some cases. So getting the uniforms correct is a long process, we've got tons of information to process, organize, and then give to the modelers and texture artists. But we're trying to make IE as accurate as possible. So if you notice anything inaccurate, tell us.

We also have a very nice static mesh to show off. 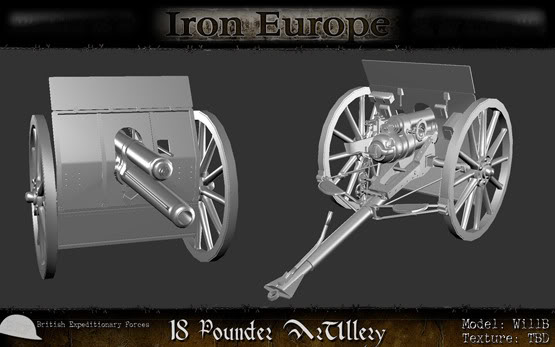 This is the British 18 Pounder. I have to say that it won't be a usable, but it's still nice to look at. You'll see one or two of these lying around in some of our early war maps. That's all for us now, stay tuned for the next update, and by the way, we're still looking for members so if you want to help out feel free to drop off an application.

Please visit us at,
Ironeuropegame.com

This really looks fantastic overall and it deserves more comments.