Hey Guys,
Today we bring you the eighth and last faction featurette of the game, featuring the brave soldiers of the Noctae Guard.
The Guardsmen are elite soldiers trained for all manners of combat and special operations.Equipped with grenade launchers and camo-cloaks, the guardsmen excel at hit and run and support tactics.

Check out the Guardsmen in action below, and don't forget to vote for us for the upcoming game category. If you think the game is worth it, of course :) 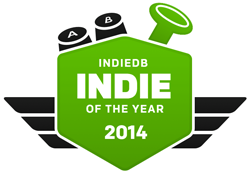