Post news RSS No more XP save, Let's measure your skill instead!

Starting from the next 2.76 release, only the XPs earned in the current map or campaign will be displayed. Instead of the total accumulated XPs, we're introducing a new metric, known as "Skill Rating". The Skill Rating has been gradually implemented in the past Legacy release, with the final version being currently tested on our official test server. Connect now to etlegacy.com to have a preview of the system!

No more XP save!

Let's measure your skill instead.

What are XP?
Enemy Territory implements XPs, which measure player scores based on specific actions, such as kills, construction, or revive. They are also used to control the various skill levels, similarly to a RPG. While not part of the original game, the ability to accumulate XPs indefinitely, as known as "XP save", has been a popular addition in many mods. We all know it: players crave for their XPs. Players accumulate XPs like coins map after map, and they love exhibiting XPs on servers to show how hard and how long they worked to earn them.

The downside of XP save
However, XPs don't give any indication of the real global performance of a player. At best, they merely give a hint about the time the player has played on a specific server. Saving XPs also create some imbalance by enabling special abilities given by skill levels permanently, such as adrenaline for medics which directly leads to the infamous "Rambo medics" that everyone hates. This has never been accounted for in the original game balance, where XPs were reset at the end of matches or the end of campaigns.

With Legacy mod aiming to stay close to the original game design, it makes sense to not encourage the use of XP Save as so many mods do. 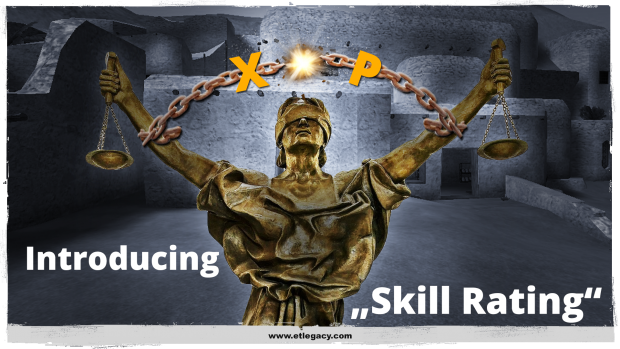 Starting from the next 2.76 release, only the XPs earned in the current map or campaign will be displayed.

Instead of the total accumulated XPs, we're introducing a new metric, known as "Skill Rating".

The Skill Rating has been gradually implemented in the past Legacy release, with the final version being currently tested on our official test server.
Connect now to etlegacy.com to have a preview of the system!

The idea is simple:
Skill Rating is a new, proven metric that can be used to compare skill of players over time. As FPS require skills in multiple areas like reflex, planning, tactical analysis or teamwork, with the relative importance of these skills depending on the map, game mode, player roles or team compositions, a skill rating can be defined as a measure of "all parameters of a player that help his team to win" and calculated using a statistical approach.

The idea of using statistics to estimate the skill of players isn't new. ETPub implements such a metric with its "Player Rating" that gives a normalized skill score. However, "Skill Rating" of Legacy mod is modeled after TrueSkill, a more modern algorithm that has been developed by MicroSoft for its XBox matching service.

• It has many advantages over the ETPub's PR, and is very well documented.
• It has been extended to take map bias into account.
• Ranks will also be adjusted to reflect the rating of the player, instead of reflecting the skill levels and XPs.

The better you perform the faster you'll rank up. However beware, several 'bad' matches and you might lose a rank again.


And now fire up the game and /connect etlegacy.com to give the system a test-run on our official test server.
Feel free to join our Discord voice chat for proper teamplay.

ET: Legacy development is a collaborative effort done in an open, transparent and friendly manner. If you want to improve ET: Legacy in any way (coders, 2D/3D artists and level designers), don't hesitate to contact us on our IRC channel #etlegacy on Freenode. Anyone is welcome to join and contribute to improve this project!

What is Skill Rating?
It is a value between 0 and 50 assigned to each player. It represents its ability to help his team to win the map. Rating will be updated after each map played at intermission. New players will have a rating of 0, and it will increase over time. The rating value determined by using the strength of the team, time played in each team and the map. The performance of disconnected players is taken into account.

What do I need to do to have a good Skill Rating?
Do whatever is necessary to win the map.

What are the percentage numbers displayed on scoreboard (using double Tab)?
The first value represent the real time estimate of each team winning the map, while the second is the map bias.

Where do I learn more about this Skill Rating system?
For interested people that want additional details, see the related wiki document and implementation ticket.

Why do people even need this?

For a lot of players the comparison of skill is a big aspect of multiplayer FPS games. Besides that this feature is a lot less unbalanced and unfair compared to XP save, because people keep their rank, but not the skill levels. That means that players that have already been playing on a server for months have the same setup as a completely new player.
XP save is one of the worst features basically all mods include. You could argue to just not have it then, but players want to keep their rank for comparison.
With this feature shuffle votes actually make sense. Currently it shuffles by XP count, however XP count is not a representative of skill, but merely of time played. This results in unbalanced shuffle results. Now it shuffles by actual skill of players.

Besides that and many other features it also gives a huge opportunity for the revival of competitive play in ET. If everything works out well and there is proper server infrastructure and player base, we now have the possibility of implementing some sort of match-making.

I really recommend giving our wiki page a read. This is a truly great opportunity for ET although it might not seem like that at first. If you still have questions, then I'm happy to answer anything :)

I don't think this feature is really needed. I mean its nice and all but mostly useless