A quick summary of Nineteen Sixty-Four, the upcoming Arsenal of Democracy mod. 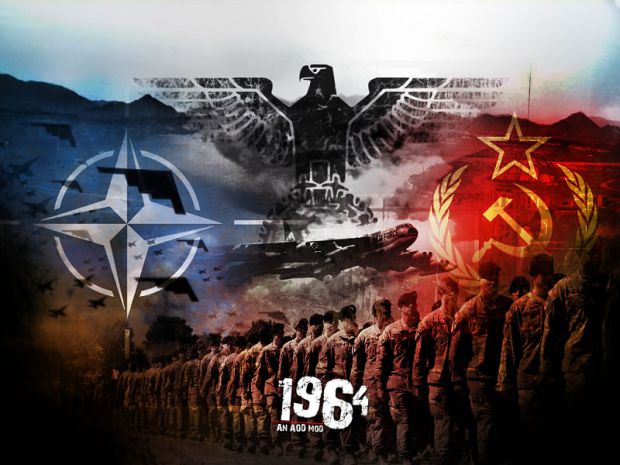 Nineteen Sixty-Four may be labeled as a Hearts of Iron II Mod, but in fact it will be for the upcoming expansion 'Arsenal of Democracy'. The mod itself is based off of a After Action Report in where the Allies, for a lack of a better term, get their rears handed to them. ( Forum.paradoxplaza.com )

This mod, when complete, will feature ministers, leaders, technology and events covering the timespan between 1964 and 2012. We will be featuring new graphics, as well as some new gameplay items that we hope will improve the quality of gameplay for such a long time span. One of the features that I would like to point out is the addition of Mechanized and Motorized Brigades. These will be attachable to Infantry (taking up the only brigade slot, which is the price that you will have to pay). These will bring them up to speed and close to the same power as the regular mechanized and motorized brigade divisions of the tech level you researched. This will allow you to mechanize your armies when you please, or keep your XP-heavy troops from becoming obsolete in modern warfare.

We hope to provide the player with a varying degree of choices that will allow for relative freedom, but prevent a World Conquest type of game where the Player can take over the world in four years. For any member of the US-led Chicago Pact, Germany and the Soviet Union will continue to meddle in the CP's affairs and diplomatic strategy. For Germany, it must balance its world affairs while keeping in mind the safety and stability of Europe. While they may hold the largest bloc of alliances on the Earth, there are many populations and underground political groups that would like to take a shot and the German government. Their large technological advantage can only take them so far.

The Soviet Union, however, is in a position that leaves in vulnerable. To its east, the Axis lay, and most valuable targets are on the opposite side of Russia, which acts as a buffer state. To the east, the Chicago Pact and their ideological enemy. The war between the Soviet Union and the Chicago Pact is a bitter one, with both side's resenting eachothers influence. The Soviet Union's handicap is that it is made up of large ethnic groups, whose priorities must be met to prevent a fracture of the Union.

Technologically speaking, Germany holds a large lead. They are the only nation that as placed a man in space. The United States is a close second, being on the verge of placing an animal into space. The Soviet Union, having lost many of its best scientists to the Bitter Peace agreement, and many more to the purges under Stalin and Beria, falls last of the main nations. The country relies on overwhelming numbers to achieve victory, which was seen in the naval battles between the Chicago Pact and the Soviet Union during the Second War of Soviet Aggression.

This should provide a good outline of the direction of this mod. A more detailed list of specific features will be provided as the mod develops.

Enjoy the screenshots we have up for the time being. They may not be many, but as we know, Hearts of Iron II is not exactly a game with exciting graphics :)

On behalf of Team '64,
Feuersturm