Introduction:
Firstly for this update we would like to welcome Decency to the team as a Contributing Artist. Decency produced the beautiful Bedford QLD at the end of this update as part of his application.

British AP-mine:
War is not always fair, and unfortunately often the side which wins is also the side that plays the dirtiest. Land mines have been in and out of favour in the history of the rules of war. World War II saw widespread use of these nasty little surprises by both sides. Below is the British Mk.II anti-personal shrapnel mine. One wrong step, and the weight of the enemy (or friendly) soldier would activate the pressure plate, igniting the fuse and causing it to detonating. The explosion was too weak to cause widespread casualties, however it was very capable of blowing off the feet of those who trod on it, and badly effecting the morale of nearby troops. 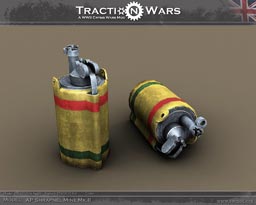 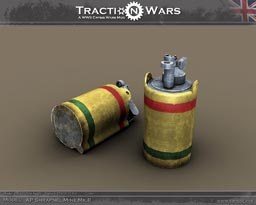 S84/98 Bayonet:
The S84/98 bayonet was designed after the trench combat of World War I to be a short, easy to manage hand to hand combat weapon. Prior to the Great War, bayonets had been designed with very long blade to defend against cavalry. With the end of major cavalry action after the trench warfare of World War I, it was realized that bayonets had to be far shorter to accommodate new tactics. To prevent rust, the metal was encased in a black coating to protect the metal underneath, giving the K98k bayonets a characteristic dark appearance. Like all bayonets, the S8498 was rugged, useful and deadly in those rare hand to hand situations. 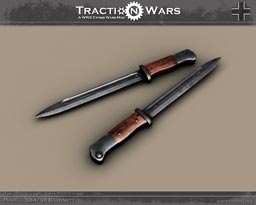 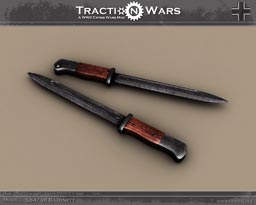 Bedford QLD:
Not all troops had to walk. The lucky ones were able to cadge rides on trucks, cars, and even the occasional tank. The Bedford QLD was a purpose built troop truck, used very commonly by Commonwealth Forces. It was reliable, rugged and could transport men, ammo and supplies to the front lines quickly and efficiently, although it offered little protection. This truck below served with the British 3rd Infantry "Iron Division", which fought throughout the entirety of the Normandy campaign. 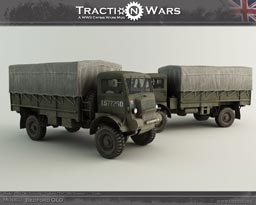 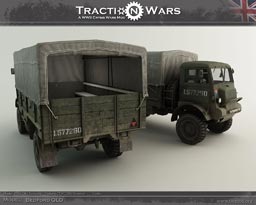 The team is looking for new developers to join, so if you think you have a skill we could use, please visit our recruitment page. We are especially looking for Mappers, Animators, Riggers, Programmers & Coders although we are recruiting in most areas.

Until next time be sure to check out our community forums, comment on news (registration not required!), post suggestions and become part of our rapidly growing community.

Wow. Was looking for a WWII mod for Crysis. Tracking this :)

You are doing a really good modelling and skinning job, but are this things already ingame (f.e. the Rifles) and if yes, could you show a ingame video, if its good enough to present public?

That's a very good question mate! But unfortunately, because of our policy I, nor any other TWDEV, can comment on it because such a thing haven't been published in our News Updates. At this moment, we're searching for some riggers and animators to speed things up a little, so if anyone reads this, head over to www.twmod.org and submit an Application.

Please be patient guys. We dislike the thought of showing you all Work In Progress (level-wise or weapons-wise), since we still lack the sufficient quality in those Work In Progresses to call it finished, like what a Crymodder pointed out with our renders; the renders of the weapons isn't finished due to they still need rigging and animating before we can call it finished. Which then again is the same thing with our levels, but from a different aspect; levels are "the last thing in" a mod in my eyes, as it gathers all the finished content from a mod, and then make it look like a finished mod.

And at this time, we don't have enough finished/sufficient quality props/weapons/vehicles/whatever, to show off the level(s) for those who might wonder.

I hope this sounds reasonable.

ok, i hope, you get some good help

Awesome work Apple, nice to see your stuff on the front page. Keep up the great work dude.