News Update #15: Officers Equipment - Hello and welcome to another update of Traction Wars. This month we have the Webley Revolver by [TWDEV] Edad Tace & [TWDEV] Brrr and a ingame screenshot from of our maps in production.

Hello and welcome to another update of Traction Wars. This month we have the Webley Revolver by [TWDEV] Edad Tace & [TWDEV] Brrr and a ingame screenshot from of our maps in production.

Firstly for this update we would like say a warm welcome back to [TWDEV] maniche who had to leave us unexpectedly for an indeterminate length of time back in October. [TWDEV] maniche will be working on Public Relations and Recruitment over the coming months so expect to see him posting our news on a site near you!

The Mod of the Year competition continues over at Moddb, so if you feel you would like to support the mod and vote for us please click the image below to be taken to our moddb profile where there is a voting button. Thank You.

The Webley Revolver first began service during the early years of World War I. It fired a heavy .455 cartridge and was known as the "man stopper." By the time of World War II the revolver design was heavily outdated by semi-automatic, magazine-fed pistols, however the British army without an adequate replacement, soldiered on with the Webley. Modification was undertaken to switch to a smaller, .38 calibre round as it was believed that the era of heavy bullets had passed. This turned out to be a mistake as the .38 pistol round proved too weak to drop enemy soldiers without hitting vital organs and the .455 version continued to be issued throughout the whole of World War II. Today, while the .455 has long been removed from nation's arsenals, the .38 continues to be issued as a police weapon. 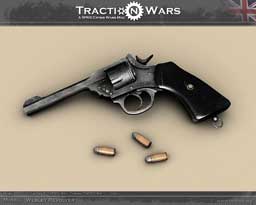 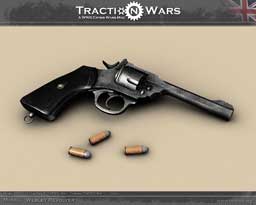 By popular demand here is a single WIP screenshot from a so far unannounced map which is in production for OVERLORD. More details about this map will be released at a future date but for the moment we'll leave you guessing. The map in question is being produced by the mappers of "Sword Team" but special mention should go to [TWDEV] teaandcigarettes for this shot. 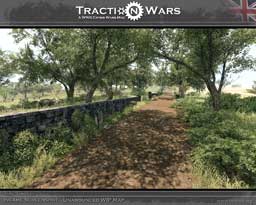 With a New Year we bring a new section to our monthly updates. Community Questions allows members of the public and community to submit questions to the team they would like to know the answer to. We'll pick the best or most popular question and publish the answers as the main part of the now regular Community Newsletter over at TWMod.org.

Question (#1): Are you going to feature the United States in the mod? (-FAQ)

Answer:For the first chapter "OVERLORD" we are concentrating on campaign between the British and German Armies immediately after D-Day. In future chapters however we plan to add other countries to the mod including the United States but also others such Canada & Poland.

Question (#2): Will this mod have fully destructible environments? (- FAQ)

Answer: Yes and no. Here at Traction Wars we are pushing the limits in areas such as map sizes, number of static objects & texture resolutions, which we hope will give the player a far more fruitful gameplay experience. To counterbalance this and make the mod playable on lower spec machines we don't plan to implement fully destructible environments however some objects will be made destructible where it most effective.

.... Read More & find how to submit your own questions at TWMod.org

Until next time be sure to check out our community forums and comment on news (registration not required!), post suggestions and become part of our rapidly growing community.

Your screenshots are always insanely gorgeous and realistic. Soon the question will be: "Can it run Traction Wars?"

We have set up certain standards so it looks good but wont be a killer. Although a modern computer with good load out is ofcourse required but thats also the thing with newer games..

I've certainly been keeping an eye on this. I have really high hopes for this but remember it's in my side view because theres not enough released to know about this mod right now. While I think your mod deserves a vote it'll have to wait till next year.

Your lack in faith is disturbing ;)

Though, even if you vote at the end of times, we are happy with all votes :P

That ingame shot is gorgeous and that Webley just as beautiful.