This time I'll preview some changes that will make the game a bit more balanced. The list also include some bugfixes so keep that in mind. If you have anything that you'd like to add (or perhaps remove), please don't be shy. I'm all ears! 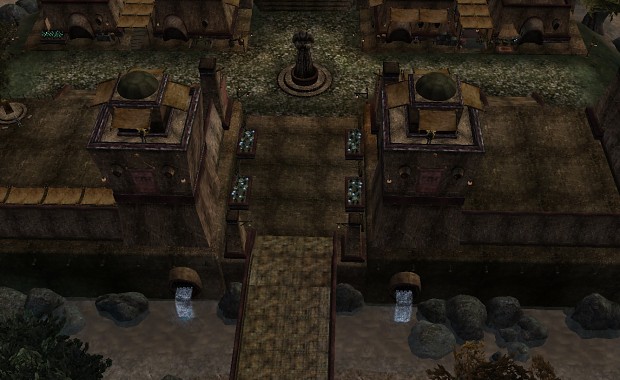 Work in progress picture from the new entrence to Vivec! Still a lot to be done though.

Others
* Right now I'm improving exteriors/interiors that I haven't touched for a while. Mainly because I belive I've grown as a modder during the project but also because I want things to keep the same quality.

* I'll reduce the values for high end weapons in the next update. These values will be based upon the new costs for armors that I included in the previous version. Expect huge changes.

* I'll add a new texture pack in the next release, Buildings! This will include many bump mapped elements so keep an eye open for this one (I'm not the one doing the texturing). This pack will be optional.

* I'm thinking of adding a prefix for every spell, example D: Fireball (D = Destruction) , to make it less of a pain to find the spells you like to use. I'm not sure about this one yet. Any suggestions would be great.

That's it for now

Are you doing anything significant with Balmora?

What do you have in mind?

You've done soooo much! All I can think of now is we need more scripting mods that add more dynamic gameplay.

I wonder...after everything that's been done with Morrowind, will you ever move on to Tamriel Rebuilt?

For the spells i would suggest using (D) - parantheses in place of D:

We'll see If i go through with it. It won't be in this patch if that's the case. Thanks for the suggestion though!

I honestly would like to have spells left as-is, but for those of us who might otherwise, you could always leave it in a separate esp for those who want it to use.

A bunch of spells are clearly broken, unbalanced or have inconsistencies, rendering them useless.

exactly, can't just leave things broken. The only things left out is the dialogue revamping (because of merging issues). And the Combat system due to their being 2 other good mods out there for it that should be left upto the people to decide which one they prefer (but he can still do weapon balancing just like with the spell balancing).

Vivec looks AMAZING. What's this about not simply walking into sadrith mora though?

Sorry for the late reply. It's still in the planning stages. I've had a hard time figuring out a good layout for my plan. Don't worry it will added in time!