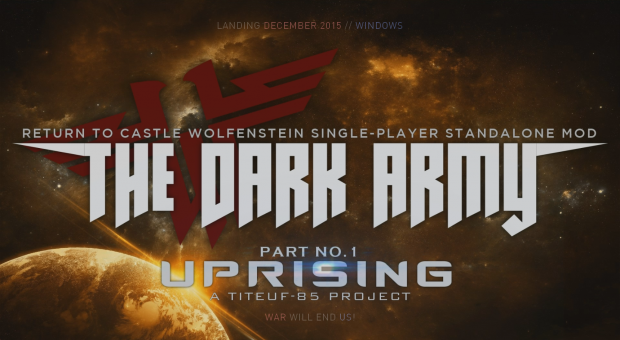 So, as I told before in this report, I've been working on the implementation of a new graphic engine for The Dark Army: Uprising mod. This engine, known by some you I think, is called iortcw! I've been working hard to make it compatible with my project. The features proposed by this new engine were originally not be able work with the features of my project — that's why I had to work hard in order to modify some things regarding the coded files. Here are the different new features proposed by this engine:
• SDL backend
• OpenAL sound API support (multiple speaker support and better sound quality)
• Full x86_64 support
• VoIP support, both in-game and external support through Mumble.
• MinGW compilation support on Windows and cross compilation support on Linux
• AVI video capture of demos
• Much improved console autocompletion
• Persistent console history
• Colorized terminal output
• Optional Ogg Vorbis support
• Much improved QVM tools
• Support for various esoteric operating systems
• cl_guid support
• HTTP/FTP download redirection (using cURL)
• Multiuser support on Windows systems
• PNG support
• Many, many bug fixes
Now everything looks fine but unfortunately I can't show visuals yet, I'm not satisfied yet, and I'm still working hard to finalize the maps. Hope to show some of it soon in images or game-play directly.

The final mission is done, but it doesn't mean the project is over: I still have things to correct in all missions, AI Scripting to do and, maybe the most important thing, I need to record audio stuff for the cinematic scenes of the project. There are plenty cinematic scenes in the mod, it's impressive! Whatever, the hardest of the work is behind-me now; I can confirm that it will indeed release this year.

That's the question I often hear about: how long will be The Dark Army: Uprising? I have two things to say to answer this question clearly. The first thing to say is that if you never played The Dark Army, and if you try to find the secrets, five hours will be sufficient I think. The second thing to say is about-me: how long do I finish a map? I know these better than anyone of course, but I take a half hour to finish The Crypt mission for example. The missions are very wide, and the objectives can be done in the order you want to accomplish these. You're almost free in the maps; it's open!

If you're curious, I have a detailed schedule about my plans regarding the project's development, that you can find below: note that the release date is potential!
• March / April — Finalization of the missions; error corrections.
• May / June — Finalization of the scripting; additional programming.
• July / August — Work on the cinematic scenes; additional programming.
• September / October — Packaging, finalizing, testing; potential Beta release.
• November / December — Potential Demo release; complete Windows release.
About Mac and Linux: the release will be later, sorry. For the Android release: it's been canceled, due to the engine replacement, sorry for that, but there's nothing to do.
Why the release date is always changing?
Well, I'm not playing with your patience or trying to: I'm just unsatisfied of the project actually.
I don't want to release-it as it is right now; I haven't been working all that time to release something like this in its current state (it's unstable I must say, right now) and know that a release only happens once — once it's released, it's released! I don't want to release an unfinished thing, wish I'm unsatisfied.

I didn't forget the famous poll every one is asking! It's coming soon this month, don't worry!
『I will create a poll with every gun of The Dark Army: Uprising featured inside it, and you'll have to answer by selecting wish gun you want... i.e. if the MP44 has most of the votes, I will upload-it on the web, and so you'll be able to download-it, and play with it in any Return to Castle Wolfenstein version.』

I published a lot of stuff I the beginning of the year: things will be calm from now on. Why? I will be developing this project while my personal life will become a more important factor than it is already on the development of this mod. That's why I won't be publishing a lot this year: maybe there will be a game-play video, but there won't be much images and there won't be any trailer (the next trailer will be the final one, some weeks before the Windows release).

I hope to show a few visuals soon to show the engine at work with my project.

✔ Thanks to all Return to Castle Wolfenstein fans for playing this game,
keeping it alive and for supporting my project's development.

One week ago, one of my images about the mod has leaked of my Google Drive space because some "Public" parameters were set. Some of you may have seen this across Internet, or not, before it was deleted.

Well... I present to you the ultimate weapon of The Dark Army, called “Tesla 44-DR”! It's more powerful than the original Tesla, and it has the ability to burn your enemies. :D

Want better quality in high-definition via Mod DB?
Click on the link: Media.moddb.com

Great news and that weapon look amazing!
I can’t wait to play this!

Don't know about everyone else but if one statement really did stick out for me in your article would be: "I can confirm that it will indeed release this year." This is fantastic news indeed and keep up the amazing work TITEUF-85 :)