To celebrate, I put together a special gif in Cogmind's engine.

Alpha 13 already has plenty of fun new content, which I'll get to talking more about with the actual release, but it's about time for a general update.

Normally by now I'd be about ready to do a major release, but because we're deep into late alpha, for the remainder of development I'm no longer sticking to my regular cycle, focusing less strictly on time-based milestones and trying to instead gauge it so that all the remaining pre-1.0 features fit in the next few releases. So this release is taking longer as I try and hack away at the list of remaining fundamentals and balance work. No ETA on Alpha 13 yet, but I'll have a much clearer picture by the end of this week, after seeing how much of this massive TODO list I can get done :P

But here's a sneak peak at some of the things coming...

We have a new mechanic that might help in a pinch when low on parts while spelunking: Scrap! Find matter and (somewhat damaged) components in these treasure chest-like piles sometimes found around the caves and mines. 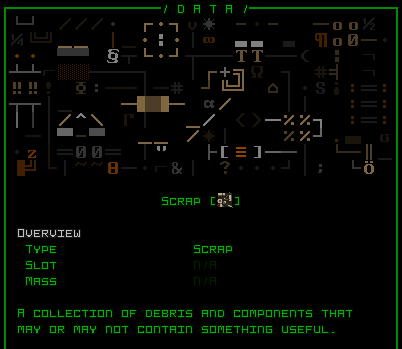 They could save your life!

An example of searching a Scrap pile.

On the UI side, despite all the different notices, some players still don't realize they're short on some resource (okay, I'm guilty, too xD), because it's easy to become desensitized to them and filter them out. This is especially true with something like core integrity, which often isn't a worry, until it is!

So there are new (optional) pop-up indicators directly on the map. You'll never not know you're about to experience a dire emergency again!

As an interesting side effect of the system, when you load a run in progress, all the applicable alerts and warnings will trigger at once :). This also happens each time you enter a new floor.

As an interesting side effect of the system, when you load a run in progress, all the applicable alerts and warnings will trigger at once :). This also happens each time you enter a new floor.

Cloaking Devices now actually have a real cloaking effect--rather than increasing evasion, they now reduce the distance at which enemies can spot you, shown here being toggled in tandem with a Triangulator:

With a Cloaking Device active, the HUD borders are darkened.

Lists of items at interactive machines will now show them colored by integrity.

And Repair Station lists will show a marker for any parts that are broken.

Something is causing this terminal scrambling effect. What could it be?

For those interested in some internal dev stuff, for fun I also put together a visualization of AIs taking turns pathfinding across a Materials map: