It’s the start of a new year and SHIFT is ready to meet it head on! We hope everyone had a relaxing, entertaining, and productive holiday break! We sure did!

It’s the start of a new year and SHIFT is ready to meet it head on! We hope everyone had a relaxing, entertaining, and productive holiday break! We sure did! I want to congratulate all of the Source mods that topped the ranks this year in MOTY 2010. It was a great year for Source and Im happy to see the modding spirit is still alive and well.

First, I would like to let everyone know that SHIFT now has a full-time Public Relations and Community Manager. Now that I have taken on the role of 3D Modeler for SHIFT, as well as a job and school again, you will see less of me in the ModDB community (probably a good thing to some people :P ). I find myself far too busy attempting to handle managing the website and the ModDB and it has taken its toll on me. The up side is this means we have a new outlook on how we plan to update and keep the community engaged. We are hoping to go for more of an "open" development in 2011. We did this in 2009 and it worked very well so we hope it works in 2011. We are not exactly sure what we have in store for the community, but we are definitely open to suggestions! Which brings me to my next point.

In 2010, we hardly updated the ModDB or website at all. There were several reasons for this but the most prominent reason was a lack of single player content. From a realistic stand point, it may be because the folks on our team have a life outside of SHIFT, but I want to truly say it is because the code base was our primary focus. Since SHIFT was constantly pushing new boundaries, content was never grounded on a stable build of SHIFT.

For example; On one day the lap system would work fine and integration with a map may work, but then the next day a lap counter may be integrated and then would break old maps. Basically, any content that would have been made, ran the risk of having to be altered if it were broken because of a new feature or change.

Managing these hiccups during a rapid prototyping process is not fun so therefore, we focused on the code alone. I have been criticized for operating this way but I can only defend myself by saying that SHIFT is not a generic shooter modification where content can and sometimes is a simple swap. The vehicles in SHIFT have many specifically required bones, animations, textures, or model requirements that are outside of the usual Half-Life 2 vehicle. Even the slightest change or addition in code requires the content to be adjusted and recompiled which can be a pain if the game already has 20 + cars. This is why we are polishing the code and content on a small scale before advancing in content. I hope people can understand this point of view.

Several people have asked me why I deleted older media for SHIFT and this is my response for everyone: SHIFT has been on ModDB for over 4 years now and it was not until recently that the final code for SHIFT has been "locked" in and production for single player content has begun. Almost ALL of the previous content has not even found its home in the new SHIFT due to technical issues or design changes. However, we did keep all of our old alpha demonstration videos on our YouTube page for archive purposes. The only remaining image from 2010 is the one below. This map (created by Spas12) is the one defining piece of content for SHIFT in 2010. It was when we debuted the 240SX and it quite simply brings back good memories to us.

We hope to have a fresh start in 2011. This means more updates, better updates, faster updates, and more of everything; well not everything but a lot more all around.

It has been one year since we released our very first alpha gameplay video and so much has changed (improved) since then. We hope to release our 3rd gameplay trailer very soon! We will keep you posted. In the meantime, enjoy this short cinematic teaser put together by the talented Thomas Frenkel! The goal was to create a trailer that represented the dark atmosphere of SHIFT's singleplayer story. While this video is merely for conceptual purposes, I think Thomas nailed the theme perfectly.

In case you have not already noticed, we finally updated our profile page. While this is fine and dandy, our website is still in the works. The graphics are done and some of the gallery bits are complete, but we have big plans for the rest of the site; including... achievements and statistics integration with profiles. 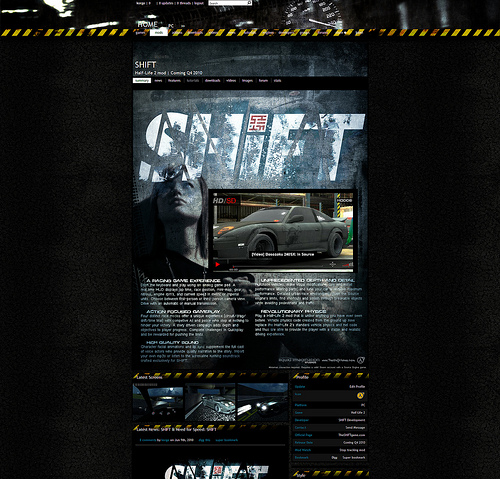 Just to clear up once again: Several people have asked who the female in the poster is. About a year ago, we posted a similar concept piece with the same girl and said she was one of SHIFT's main characters. The girl in the poster is Bonnie, who is still a part of our cast. She plays the role of Sara Margo; a young female street racer who re-introduces you to Oceanview; the city you thought you remembered.

We have been getting a professional vocal studio ready to lay down some of SHIFT's voice over work. We hope to bring you a few of those samples in the months to come.

To kick off the new year, we posted our very first screenshot from SHIFT. It is a simple screen capture of our classic 240SX being backlit by a gorgeous morning sunrise in Oceanview, California. (Downtown) Oceanview is the city in which the 7 chapter story of SHIFT takes place. The sky was created exclusively for SHIFT by MrChop who has also done skies for other modifications.

Not too long ago, we posted an image of a work-in-progress high poly model of an engine; but not just any engine. The file was uploaded and titled "117 hp @ 13,000 rpm" and surprisingly, only a few caught on. Let's just say that with SHIFT, we like to push the limits and try things that have never been done before on the Source Engine. :) 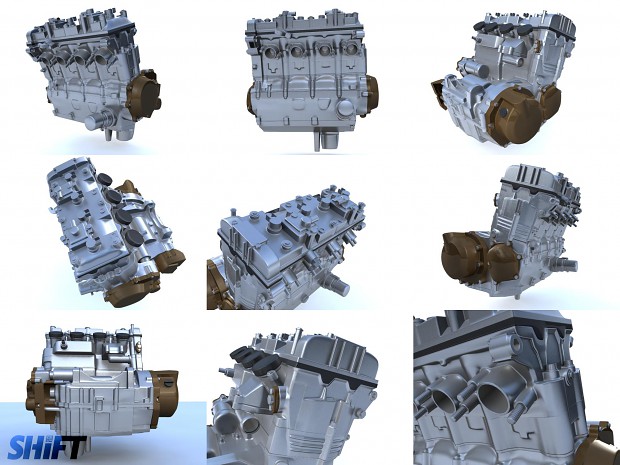 We are currently looking for 1 or 2 extraordinarily talented 3D modelers who would like to work with a small dedicated team working on a unique modification. We are looking for environment and character artists in particular.

By being on the SHIFT team, your high quality work will be presented along side other talented artists and professionals who have contributed to SHIFT in the past (Robert Fletcher, Laurens Corijn, etc). Because we have such a high standard for our content, we hope having SHIFT on any portfolio will be a worthwhile investment for any serious artist looking to break into the industry.

Working with the SHIFT team will give you an opportunity to learn the Source engine art pipeline, work in a rush-free environment, and play test SHIFT with the rest of the development team. Flexibility and complete reference images and technical guidelines will be provided from the start.

Prior works are required to be considered and can be sent to my inbox personally.

This just about wraps up our very first news post for 2011. If you feel the need to talk to me personally, you can contact me through the Steam group and send me a message in the chat.

Best regards and a happy (productive) new year to all you modders,
korge

Loving everything about this update.. Centimatics look badass ;D

If that logo was animating the trailer would have been perfect.

Omg...this is so awesome!

That video is AWESOME! Love the end with the headlights! Wonderful job guys!

Wow everything is so detailed! I really love the car engine there, looks pretty good. Also, congratulations for this awesome ModDB page.

Great teaser, but the thing is that you only show us one car, and although its a rather pretty one, I'd like to see some more cars, even if they're just WIP.
keep up the good work!

This looks quite interesting. Tracking

i love how it looks till now and i am sure the cars will look great, (hope they also drive like that but i am sure you will do you're best to make them as best as you can).
but what i don't understand is why you have choosen for the source engine for this type of game. don't get me wrong, i LOVE the source engine but it s not very good in large outdoor area's. even with the use of portals and such you can make the maps only so big.
and i asume you will try to make the maps as large as possible, simply because this is a driving game.
still, i will track this mod and am very interested to see where this is going too.
and please, please do make a sp mode, mp modes are nice but personaly i love sp modes!!
but that shouldn't be to hard, and because you're talking about a story i asume this is sp (and maybe mp too).

Source was chosen because of it's ability to tell a story with tools like face poser. Plus the challenge of doing all this in the engine is also interesting.

I would like to thank you korge for posting the update while all of the things slowing me down prevented me from doing so.

That lens/flare effect from the video sold me out. Hope it make it way to the game.

Im in love with this game.

On the summary page it says SHIFT will support gamepads, which is cool. Now I ask myself wether a Dualshock 3 gamepad will work with SHIFT, as I own a PS3, but no other gamepads for the PC.

Really looking forward to your mod!