Trees are redone to take up multiple squares, and trees and land are shaded according to season and time of day.

Posted by UltimaRatioRegum on Nov 10th, 2012

Ultima Ratio Regum's trees have been redone and shaded according to season and time of day. They also vary in the size of their canopy according to their species and their height. It had struck me that having trees take out one square (the roguelike norm) made little sense when the player could attempt to jump three squares if sprinting! The picture below is a taiga night-time scene (thus trees have blue shading), after you’ve been running for a little bit (hence why the player is starting to regain stamina) with the new time/date system on the far left (it rotates, going from dark to light and back, and right now is near midnight, hence the sliver of blue on the left), a food meter, and trackers for your willpower, stamina, and exhaustion: 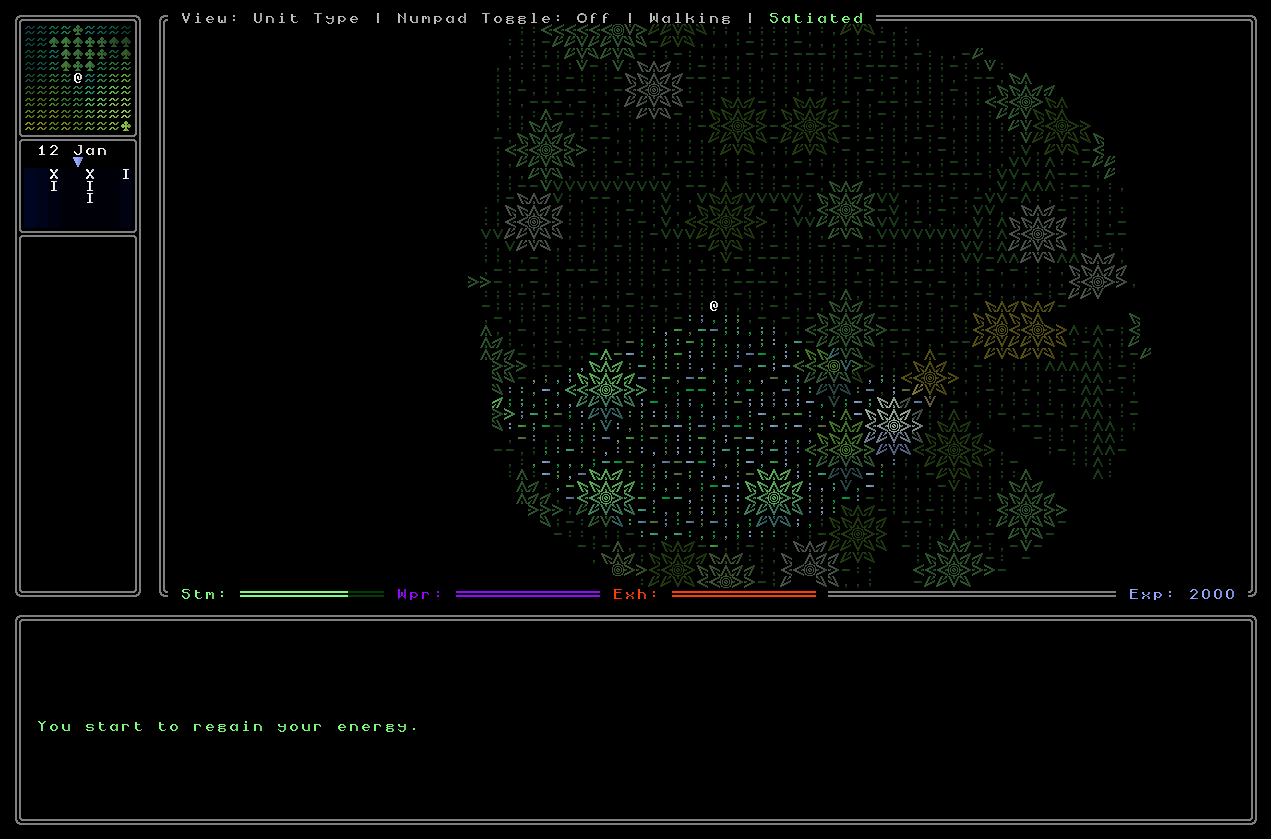 I'm now well past 50% through the coding of 0.2.0; there is some more work to be done on saving and loading, a little more on jumping, falling and managing the new time system, some more additions to the redone sidebar on the left, then just a number of remaining fixes and under-the-hood changes. You can keep up to date on my devblog, Facebook page, or Twitter feed. The devblog is updated weekly on Mondays, Facebook a few times a week, and the Twitter roughly daily. Any thoughts, please leave them in the comments! 0.2.0 is scheduled for release at the end of this month, and contains a massive number of fundamental changes to skill trees, character creation, combat, setting (no mythological elements any more), climate, movement, maps, two secret feature-bloats, and other things I'll be adding here hopefully increasingly often in the coming weeks...

Hehe that looks really good! Of course they all sort of strike me as pine trees but I get that there is a limitation to this sort of art style. ;)

You game only seems more interesting the more I read. Looking forward to more!

nice ..i wanna try it

this is one of the games i really look forward to.
keep up the good work ;)

@ Roh - thanks! Yeah, I know what you mean re: Pine; I tried a *lot* of other options, trying to introduce some deciduous/evergreen variation, but they all looked rubbish. Ah well :).

@ Lyrrad - thanks; by the end of this month, the wonders of 0.2.0 will be available. Finishing off development at the moment...

if you have time post your game here to increase its visibilty
Facebook.com

How do we look under trees?

Inverted, with a background colour of the tree's shade; if it is a yellowy-green, you'll show as a black @ on a yellowy-green background. Works very nicely; same will go for NPCs, animals, etc.