We've made a new trailer to whet your appetites and let you see some of the new stuff in Gamma, plus we've got a brand new SAM site to show off. Plus some other updates! UPDATE: The new gameserver update has been released!

Before we get started, a quick notice: new players who have recently joined the official gameserver with the name "Cold Warrior" (the default profile) were being permabanned. This has been corrected, but new players should create a new profile before trying to play!

To change your in-game name and avoid being immediately kicked by the server, simply click "Add Profile" and use a new name. You can safely use "Delete" on the old "Cold Warrior" profile to make sure you don't make a mistake.

If you already made a new name and found yourself still banned, it's because the server thought you were trying to evade the ban. These ban flags have been removed, so you can safely get back to using your preferred name now. Thank you for understanding.

If you scroll over on this page to the most recent video, or follow this link, you will catch a pretty sweet remake of the original Red Alert teaser trailer. It's our brand new trailer, put together by Occult13 (with the hallway itself done by rm5248) and a bunch of us, based highly upon the original Red Alert teaser video that some of you might remember from a long time ago. The end portion of the trailer is actually based on scenes from both RA: Retaliation, and the original RA intro video. Hopefully, it's a nostalgia trip for everybody!

In one scene in the trailer, you can also see the new SAM Site for the Soviets, which actually flips open each pair of covers before launching its missiles. It's a little bit amusing to see the classic C&C SAM site finally attacking with more than just that first couple of launch tubes. That is r34ch's SAM Site model that TheBeerinator recently finished texturing. Next up is the Flame Tower, but for now, take a look at the SAM! 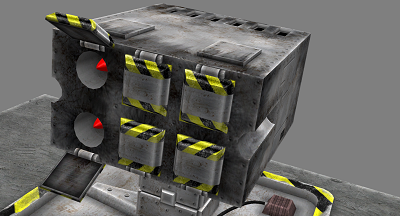 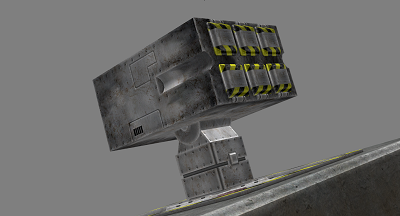 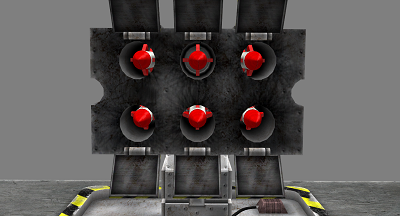 Click for larger versions of these images; I will upload a few more shots in full size to our image gallery.

We've been using, for the most part, stock Renegade explosions for a while and they're honestly not all that great. They get in the way far too long, don't look particularly exciting and are repetitive, and don't clue you in to what weapon is hitting really. I mean, if you fire Volkov's alternate fire, you see the same spinning 3 chunks every time... no matter what.The V2 explosion is a notable exception, and it really stands out.

Well, all the tank shell explosions have been redone recently, with notable size variation based on the weapon and a bit of visual variety. New missile explosions for small (LAW/RPG), medium (SAM/Mammoth), and large (M.Sub/Destroyer) rockets were also made. Grenades also get their own unique explosion, full of shards. We're also trying different things with fireball impacts.

If you hit dirt with a tank shell, expect a lot of dirt to be kicked up. This obviously won't happen if the shell explodes in the air. If you plow a LAW into the side of a Heavy Tank, expect large metal chunks to get blown away instead. Igniting infantry also has a newer effect, instead of borrowing from the fireball's after-effect.

What's next for Beta

First of all, apparently a number of players joined the official server with the name "Cold Warrior." They ended up banned, and coming back on a different name was no good; their names and their IPs were all banned. This has since been addressed and they can come back to play, with a reminder to not stick with the default name unless they want to be kicked immediately for some reason!

Also, you might have noticed that XCC Mixer can no longer open the data files used by 1.3.1; this is a result of our new patching system. The files are fully compatible with the game engine of course, with LevelEdit, and with the official RenegadeX mix handling (Not to be confused with Renegade-X the mod, or RenX or RenXc the players). You can find this tool in the Renegade Mod Tools packages.

Next, some of the key server integration enhancements for 1.4.0 are still in the hands of Reborn the guy with the tragic name, and Ghostshaw of TT. They're not being idle, though; we've hit a strange connection stability issue with two of our testers, and don't want to ship a crippled build, so Reborn has been working very hard with them to get things hammered out. If we get past this we will be in a better position to make 1.4.0 public.

Zunnie has been working on new game mode support so that fan servers can have more interesting things to try beyond what the maps all came with. A new one is the ability to re-build lost structures, which is a huge new can of worms ready for somebody to play with once the 1.4.0 build is ready and the new FDS is out. Rather than releasing a half-finished 1.3.1 FDS (because some of these 1.4.0 features are awesome and worth waiting for), Zunnie's spending his time adding new tricks to the mix.

Attention server owners! Since this post was published, Zunnie has also just released a new build of SSAPB. Those of you who operate a gameserver can download and use SSAPB 1.39 to enhance your gameserver with the very latest Server Side A Path Beyond features and functionality, including support for alternative gameplay modes such as buy-your-base or snipers-only. This will also allow you to incorporate several random crates to provide that extra element of uncertainty bonus upgrades-or-punishments that RA1 had. Check the Game Update thread!

Players do not need to download SSAPB in order to enjoy the benefits of an SSAPB-enabled server. But if you run a server, you've got nothing to lose and a whole lot of new suppot and features to gain.

The SSAPB 1.39 package is the latest "free dedicated server" software installation package for server owners. Intended for use by those who are serious about hosting a permanent or semi-permanent server, this 550mb complete package will provide everything you need to start hosting a game server for other people to connect to for public or clan use, or upgrade their old gameserver.

Mirrors will be available shortly.

The SAM looks very good. And trailer is excellent.

The trailer is really awesome! Occult, rm5248 and everyone else did a fantastic job. The sam site looks so good as well.

The SAM is awesome! The trailer is more than FANTASTIC!!!