On the surface, the new Amazons: Total War mod seems like an extension of the previous Amazons:Total War mod. But nothing can be further from the truth.

Whereas both mods used the assumption that 99.99% of ancient horses are only 12 hands high (120cm), this would accord women equestrians an unfair advantage as cavalry soldiers. 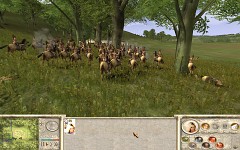 The latest 7.0 mod, called "Amazons:Total War - Recalesced" is an RTW/BI game based mod allowing the player to explore ancient battlefield using modern military concepts. Such as:

Here is a demo video of Amazons Total War