FW:ToW has been very fortunate to get some amazingly talented individuals over the past two weeks...and they're doing some incredible things!


Over the past two weeks since our last update, we have been very fortunate to get three new modellers/textures and even some of our old developers coming back. They are extremely talented individuals and those of you that have followed Empire at War are more than likely to have seen their work or heard their names; Dr. Knickers and Lord X. The other is our very own Bouma who was very much responsible for the amazing textures on most of the Corellian Capital Fleet

That being said, to give you some examples of what Kalo, Dr. Knickers and Lord X have been doing, I have an image show :)

After the satellites, Kalo went to work retexturing our great Bulk Cruiser model. Kalo worked very hard on optimizing, uvmaping and retexturing this model and I most say, I'm SO delighted with his work. He's really made this not so pretty ship stand out as a gem: 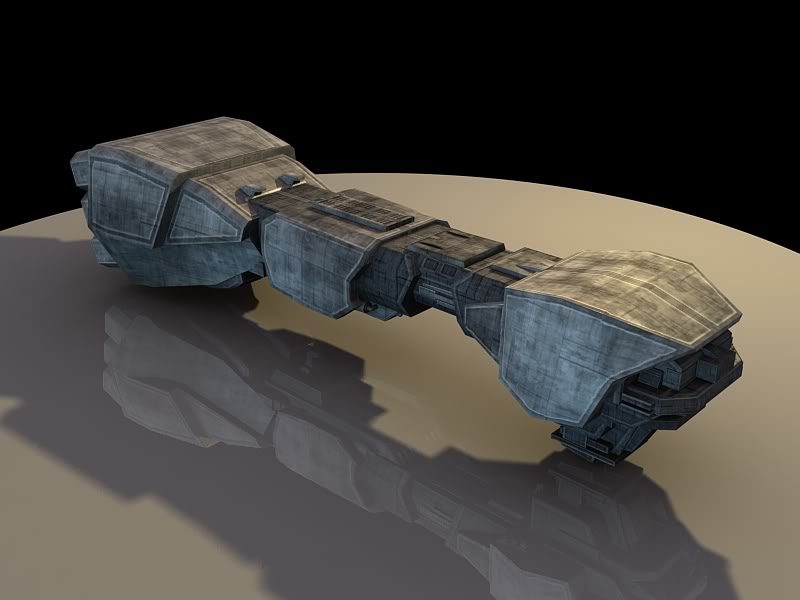 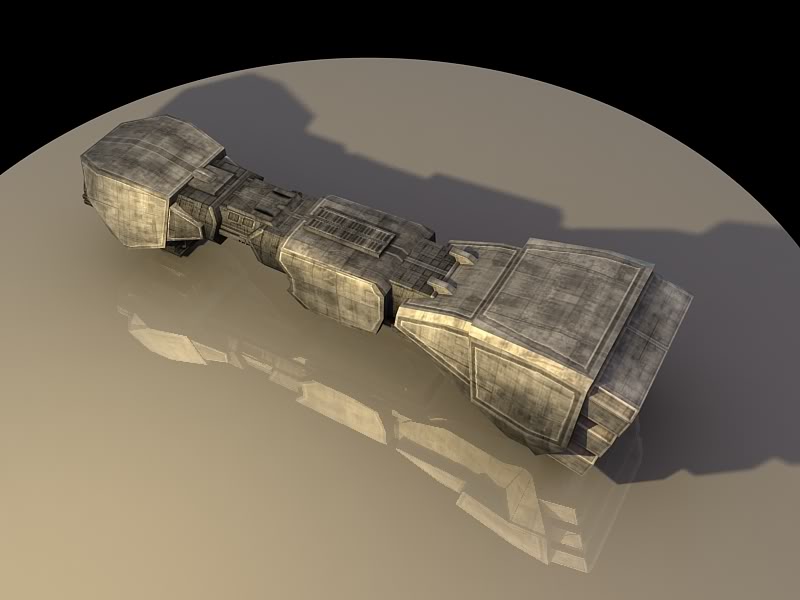 As you can see, the quality of the texture is absolutely epic and I feel this is easily one of the best looking Bulk Cruisers I've come across in my modding career (Granted I'm biased :)) He's also worked on revamping our Quasar Fire Carrier by improving some of the existing model: 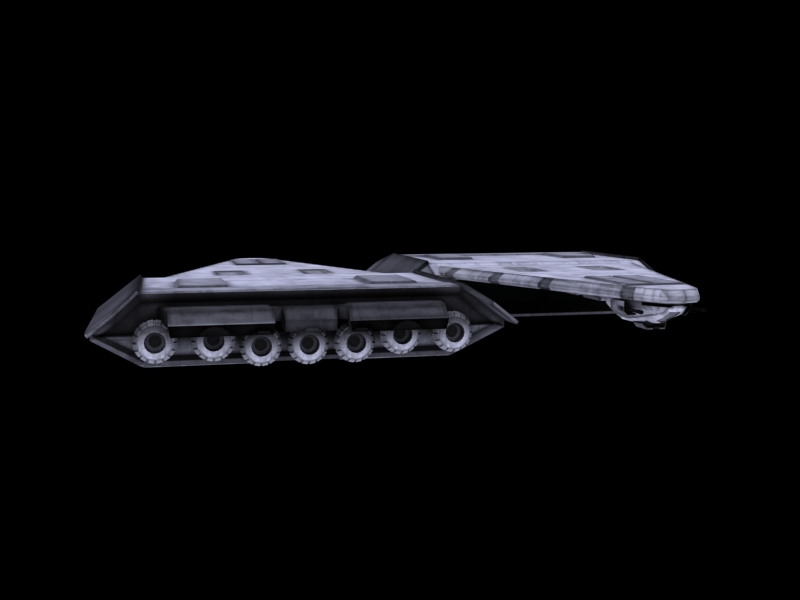 Kalo's next big project is working on the new Jedi fighter and helping me with capital ship wreck models!

Dr. Knickers started working on improving some of our current models. His focus was on the E-Wing. He has redesigned the model and is now in the process of texturing it from scratch. I'm so excited to see what he can do. Here's the WIP: 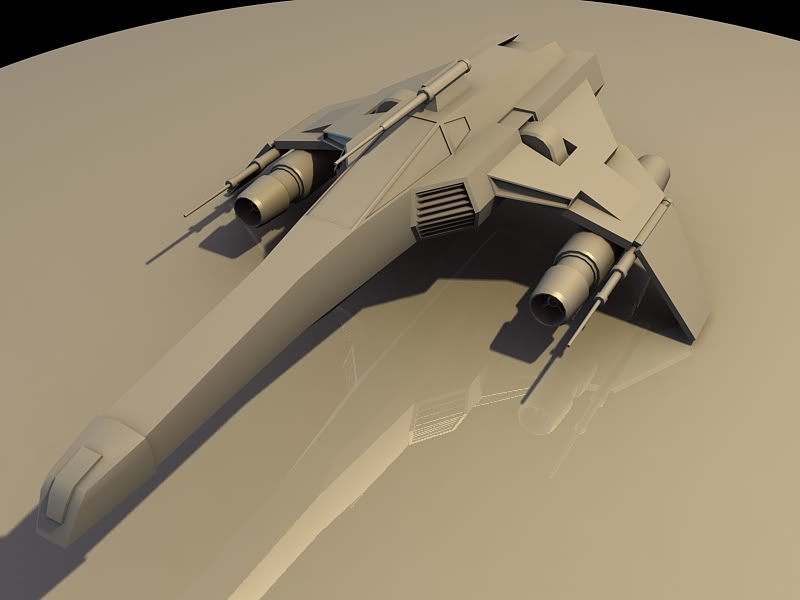 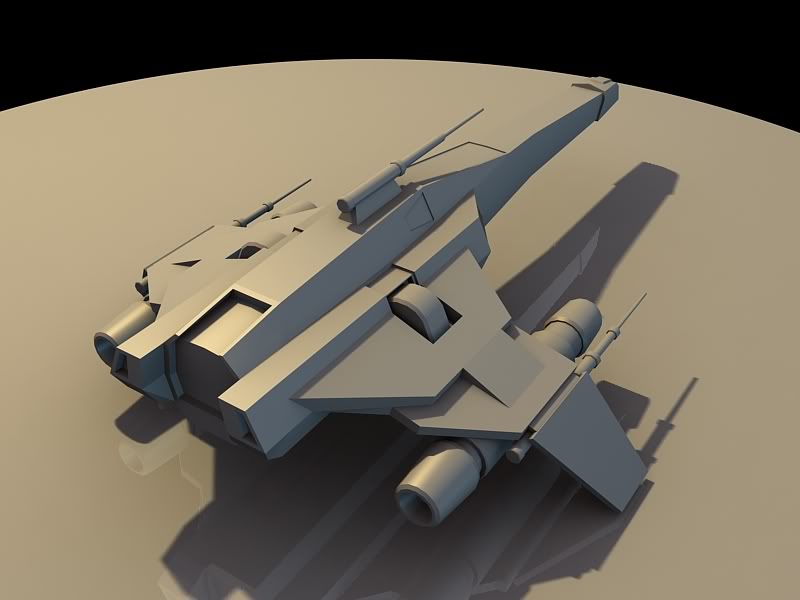 After this project, Dr. Knickers plan to work on the new Sith fighter as well as create a new splash screen for the mod. If you haven't already seen his amazing work, I encourage you to check out his spectacular splash screen for the Empire at War: Forces of Corruption mod, Thrawn's Revenge.

Lord X, or X, as he likes to be called, has started work on the new Hutt Capital Ships we have in development. He's done an amazing job thus far and I'm just going to show you his WIP and LOD models for the beautiful design. I won't tell you the name of the ship but I'm sure some of you SW diehards will be able to figure it out: 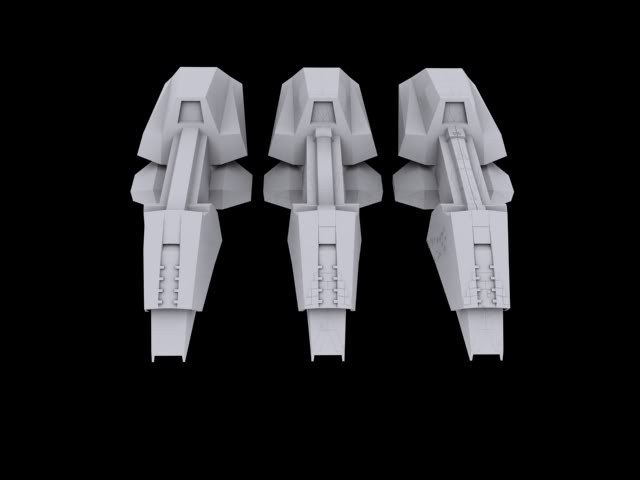 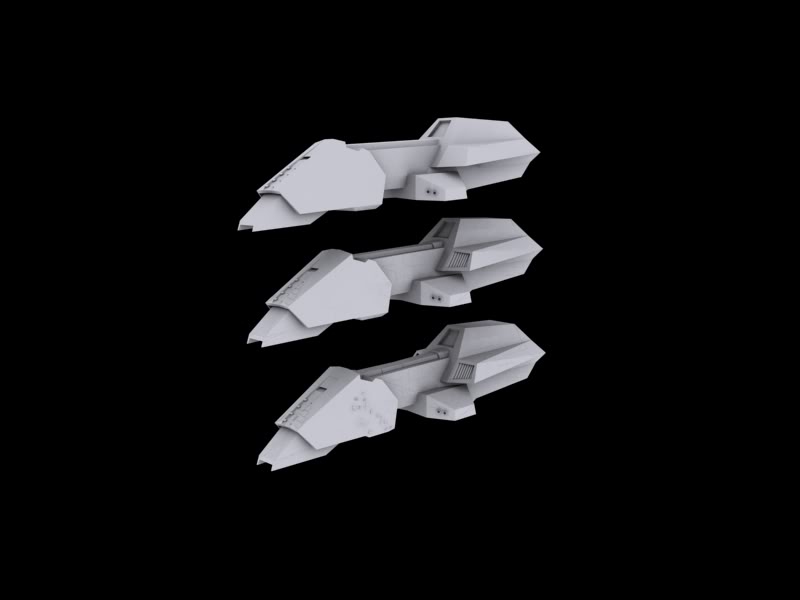 I really cannot wait to see what the finall product is going look like, but I assure you, it's going to be amazing!

Since our recent acquisition of these talented developers, we have decided to go through our entire shiplist and improve the quality of some models/teuxters that are simply not on par with our other models. As we optimize, improve and redo a few of the ships, I will keep you all updated on our progress.

Now, onto that announcement. I actually have three to make:

Firstly, w0dk4 currently has stated to the developer team that he is on the verge of creating normal maps for Freelancer. What this means is that we'll be able to produce high quality looking models that are much lower in polygon. What does this mean for the player? Beautiful models with high details that don't significantly hamper performance! I hope we will have something within the next month to show you.

The second announcement that I wanted to make was regarding our recent affiliation with the Thrawn's Revenge mod team. We have decided to combine talents to produce models/textures that would otherwise not be possible in a defined timeframe. For those of you that have Empire at War: Forces of Corruption, I strongly recommend you check out this FANTASTIC mod!

The last big announcement is regarding the closed beta. We have decided as a team, that before we open the mod publicly we want to test out a lot of our concepts and balance. Thus, we hope to have this beta out by the beginning of April 2nd 2011. This is a huge step for us and I'm so proud to have been on this fantastic team from the beginning.

I guess then the Mod comes out ~August or September 2011, eh?

Anyway its an awesome progress you did there, hope these new modders will help you make to mod even more awesome :D

Well, i would hope the mod would be released befire then but it all depends on how the Beta goes :)

Thanks for the kind comments, too!

Read the article again :P I tell you!

I have released a mod on April 1st left it up for a week and took it back down...

the ones who got it where the luck few that got one of the most off the all mods ever for eaw:foc

There's somethign weird with the E-Wing. I know this one it's not the original design. But, did you get inspired by brandx0 E Wing's design from Fate of the Galaxy (a Star Wars stand alone base on the Freespace 2 SCP Engine) ?

Yes, the design is inspired from the FoTG's work, whose modelling has been absolutely superb and a mod i am currently tracking for progress.

any hope to see an OSP version? I'm a bit hopeless about this :-\ It seems that SW mods are not made for singleplayer, never... and I don't know why...

If you want single player, juste watch on Fate on the Galaxy.

While this mod won't have singlelayer, i encourage you to check out Thrawn's Revenge and Fate of the Galaxy. TR is currently out and FOTG is currently well in development.

If i realized you planed on posting the 2nd WIP, I would of put it on a stand...

the mod looks really good, I found a copy of the game for 10$. But i would like to know, is it worth buying?.

Its very worth it. If you want to check out the demo, download it here:
The-starport.net

ive just looked at the "unnamed ships" ;), i know the general idea of the ship, but is that one ship with 3 variants or 3 different ships (corvette cruiser etc) and they just arent scaled?

i havent ruined the suprise for anyone, and id love to know if the ship has many variants

Could you please credit Brand-X from Fate of the Galaxy in some way?

That's fine, but are you in any way affiliated with them, Battuta?

Sure. I have no issue crediting Brand-X for the E-Wing inspiration. That being said, the model was made by Dr. Knickers and he did a fabulous job with it.

I am excited to hear that you got yourselves some great new additions to your team in such a short amount of time. The work shown is damn impressive, and i can't wait to see the "normal mapped" models. It'll take one big load off my aging computer.

I am overjoyed to hear that with all things set in place, you guys have set a time and date for the beta. You guys have come a long way, and this is a pretty big milestone that some mods of the same colossal ambition never reach. I congratulate you guys.

It sucks that i won't be able to try the Thrawn's Revenge mod right now though. I have the original, but not Forces of Corruption. Damn.

I also gotta say that the continued fan support here on MODDB and other sites is a huge motivation boost, in light of the current MODDB poll.

So, thanks for the support everyone!

Thanks, Mugsy! It's so nice to have supporters like you around that push us devs to produce the best mod we possibly can!

I'm liking the work on show here, the E-Wing is one of my fave EU fighters and you've done a nice job with it here, though have to say I do slightly prefer what Brand X has done with his re-imagining, it just has much sleaker lines. I'd be tempted to try and get closer to his design if I were you, though it isn't canon it looks right sexy what he's done with it.