Day One video included! New space battle system featuring a more Commanding-like Captainship instead of an unreal mind-machine full control as in most of games.

While there is a lot of more things to do (already advanced WIPs) like finishing the tutorial level, improving the space chart and ending other important scripts, I began the crafting of the Space Battles system.

My first idea was just translating the ground turn-based tactic combat to space, but was unappealing. In ground is perfect; But I wanted something more... Galactic Battlefare.

The idea was a more cinematic battle where captains orders matters instead of direct control of everything on the ship, something more real, definitory of what Galactic Battlefare setting in general is going to be.

Maybe or possibly not you remember the Movement Octopus of Doom System? Now, Behold what I call (in my line of work), The Dancing Kraken of Space Combat, an sketch about how this space combat system will work. 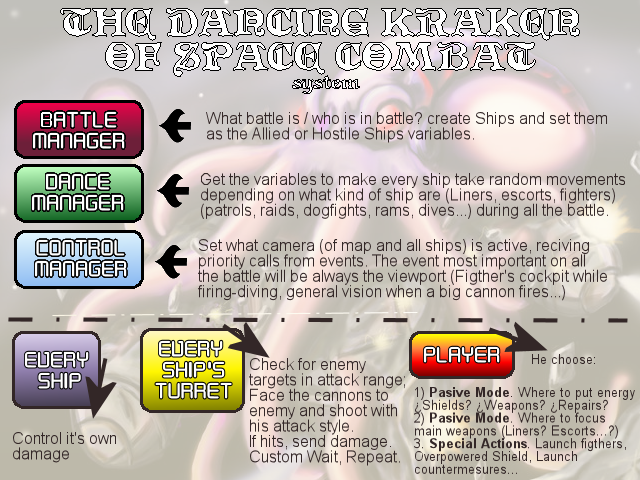 The premise of this Combat system, or, better explained, Battle system, is that the player is the Captain of a relatively big ship (a Frigate), so he has his calls, but doesn't have direct control of the ship. He doesn't have a mind-machine connection that allows him move the ship and point every weapon to their objectives (as in most of the games). The function of the Captain is shouting orders; In gameplay, and exactly in Ancient Relics, the player as a Captain will have this 3 functions:

- Energy Flow (passive selection): Where to administrate the big energy output; Shields, Weapons, or disconnect it for emergency repairs.

-Kind of Target Selection: Determine what kind of enemies are the primary objective for the main weapons (the point defence turrets always shoots fighters or the closer enemy, but other big ships usually doesn't get so close).

- Call Special Actions (Didn't decided yet if every action has its own cool down of there is a general cool down for all actions and you may choose one.

In the video you can view a general idea of the system, with only The Ancient Relic (Player's frigate) and a pirate enemy squadron in the dance.

While writing this, I'm scripting and implementing the point defence turrets and preparing the Managers to take in count more fighter squadrons and bigger ships.

Read the non-professional more juicy development diary at 7Ye blog!
Until next time!