We, Mad Sheep Studios, currently work hard on a new title - Urtuk: The Desolation. Urtuk is an adventure, turn-based tactical RPG game, set in a dark fantasy world. The world is open and the player can travel freely with no limitations. The game contains two main parts - one is the world map, where the player holds a party of adventurers and travels freely across the map. Game focuses on fun tactical combat and world exploration along with interesting quests and twists.

We, Mad Sheep Studios, currently work hard on a new title - Urtuk: The Desolation. Urtuk is an adventure, turn-based tactical RPG game, set in a dark fantasy world. The world is open and the player can travel freely with no limitations. The game contains two main parts - one is the world map, where the player holds a party of adventurers and travels freely across the map. Game focuses on fun tactical combat and world exploration along with interesting quests and twists. 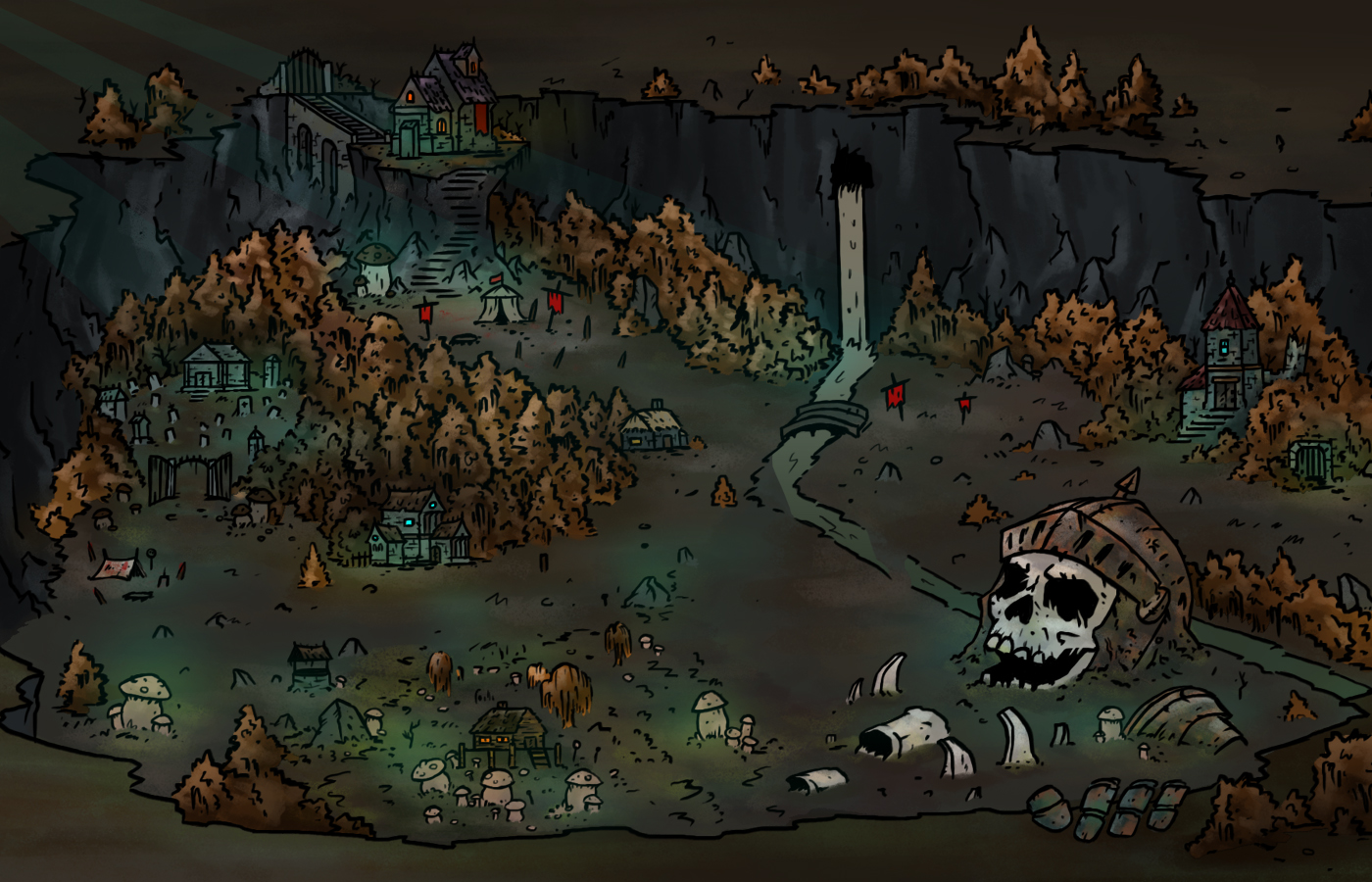 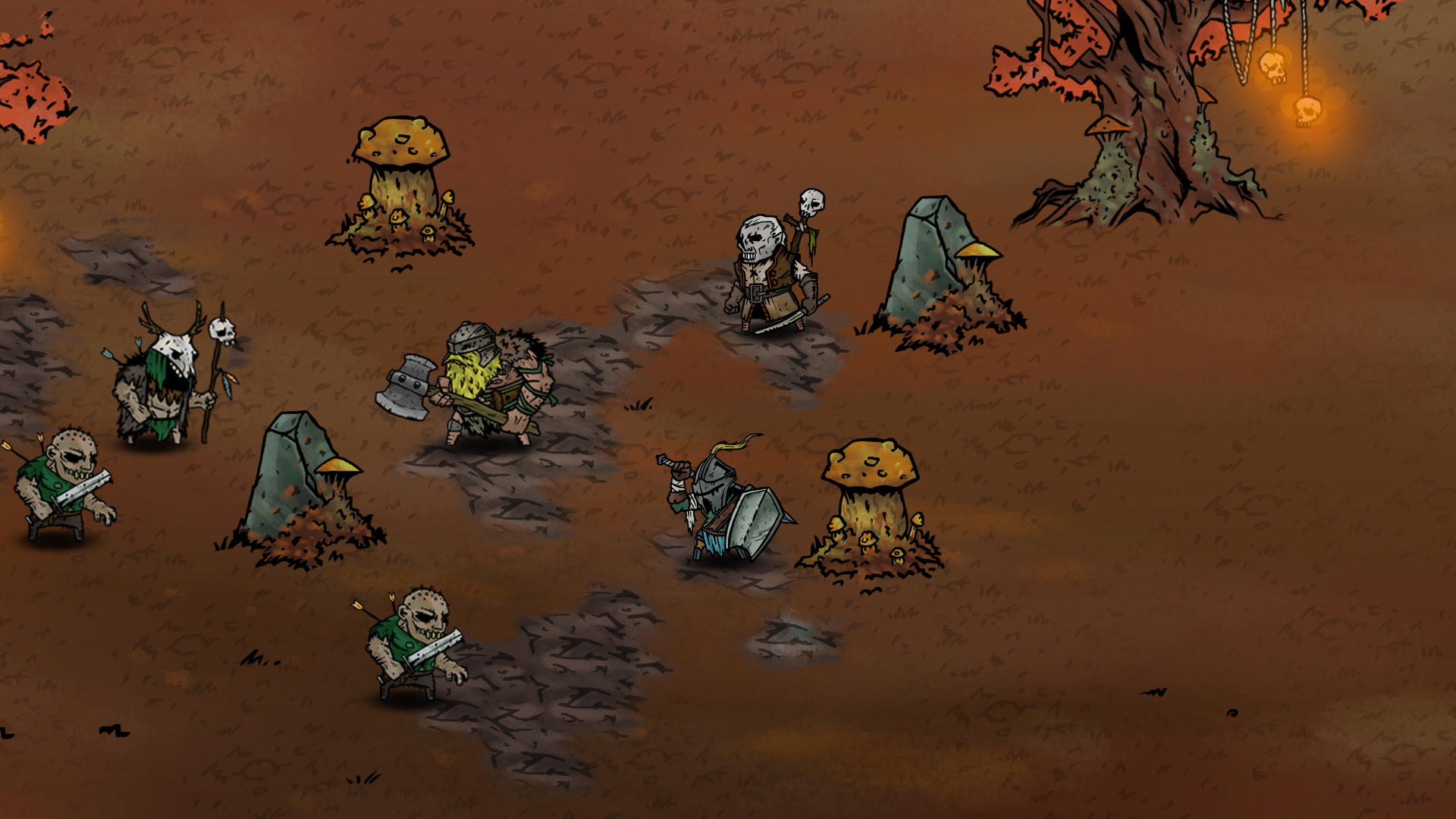 The world in the game is a place of pain, suffering and darkness, set with (light) fantasy features. Urtuk is the name of main character. His story begins when he escaped from the Sanatorium, a place where medical experiments take place on common people. Urtuk's escape was successful thanks to his fellow old friend - Eldric.

Urtuk has suffered a mortal disease, a mutation in the Sanatorium. With every day, his health condition worsenes.. Now he searches for a cure in the world. It's only matter of time, when his mutation evolves to a level, when he finally dies. 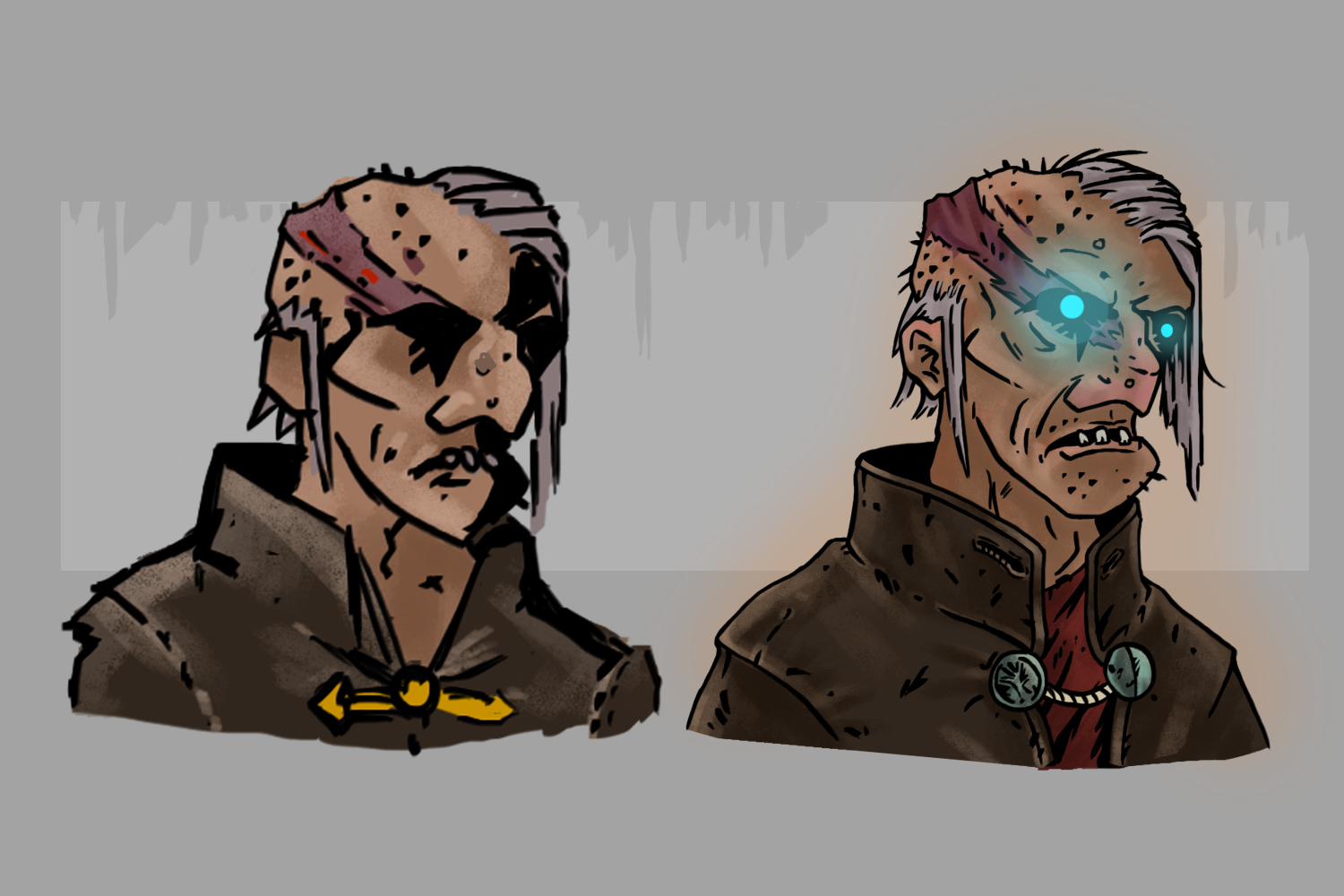 The world is set into dark, grimy theme. There are no classic fantasy beings like elfs, dwarfs or dragons, nor powerful magic, although there are some light magical features involved.

Many centuries ago, there were powerful Giants roaming the world. They lived peacefully with humans until a war between Man and Giant began.

Now the Giants are extinct. Some years ago, few librarians studied the bones and remains of ancient Giants. They did experiments and found out, they can extract a mystical fluid from their remains - Life Essense. With this, they could add many beneficial elements into human body. Not yet known, what exact impact this fluid on a human has, the experiments continue.. Very often, instead of improving the health condition of the targe, an opposite effect would take place, inflicting a mutation or lethal disease. This was the case of Urtuk.

In the game, player takes Urtuk under control in the world map. He can travel freely across world, limited only by rivers, abyss, solid objects and other impassable terrain. The time in world flows realtime.

The ultimate goal of main story is to cure Urtuk from his disease.

While adventuring, the player can add or recruit other characters into his party. In the beginning, Eldric already accompanies him.

Urtuk's party can engage into various encounters or conflicts. At that point, the tactical battlefield map shows up. Note that Urtuk will not be present on the combat map, as he is too hurt to engage the enemy effectively.

Many events can be handled by text options in a dialog popup. It's up to the player to choose from many variable options. Any quest can be non-linear and can be resolved either with a dialog or combat. Some are combat based only.

There are friendly and enemy characters in the world. NPCs can help the player or aid him into new directions. We put big effort into the world locations for the player to explore and visit as it is the key to discover the path to Urtuk's ultimate cure! 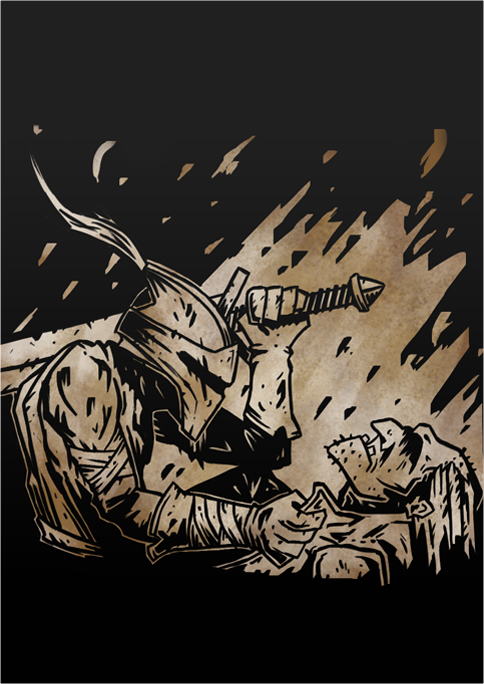 When a battle takes place, any party member can get killed. We'are still investigating the option for permadeath.

Right now in our dev process, when a friendly unit is dead, after the battle is over, it can be reincarnated for some cost.

The game will end when all you party members are dead and a new combat begins. At that point, as Urtuk cannot defend himself, the enemy is going to kill him and that's end of your journey!

So make sure you have at least one party member alive when traveling the world. As said, any party member can be resurrected, but we might disable this option in a more difficult game setting for the player.

The world of Urtuk is dynamic, meaning for example, if you engage a scavengers camp and killed 3 out of 5 scavengers, then when the battle is over and you engage the same camp again, only the remaining 2 out of 5 will be present in the upcoming combat for you.

The characters in the game have classic RPG stats like level, abilities, skills, HP and so forth.. With each combat your party members gain experience and level up. There are many classes you can choose your member from, like tanks, damage dealers, support, disabler. We will discuss the class system in another section.

We also have the "inventory slots" for each character, e.g. you can change your weaponry and armour. Some class restrictions apply here. You can get items as loot from combat or buy/find it in the world.

We have put a tremendous effort into combat mechanics and its gameplay design. The core of the game lies in the battlefield, so we added as much fun factor into it as possible :).

Our combat is turn based on a hexagonal map. The rounds are divided into player's round and AI's round. In player's round, player can freely select any unit and execute its actions until all of the actions are executed.

Each character can move and then execute an available action. This can be attack or ability use.

The attack or ability use end the current turn for selected unit.

As for the combatants, we introduced the classic RPG class system.

For now, there are these classes in the game, player can choose from:

We are designing many more!

Each class has its own specific ability (or more) and possibly a passive skill. For example, Guardian has the 'Bash' ability, utilizing his shield to push enemy 2 hexes away.

The tactical map has environment objects, like rocks, spikes, muds which add some behavior if stepped over or bashed or pushed against. For example if the guardian bashes enemy against a rock, the enemy will be stunned.

Usage and proper utilization of the environment is the key for victory! We will talk about specific behaviors of the tiles later. 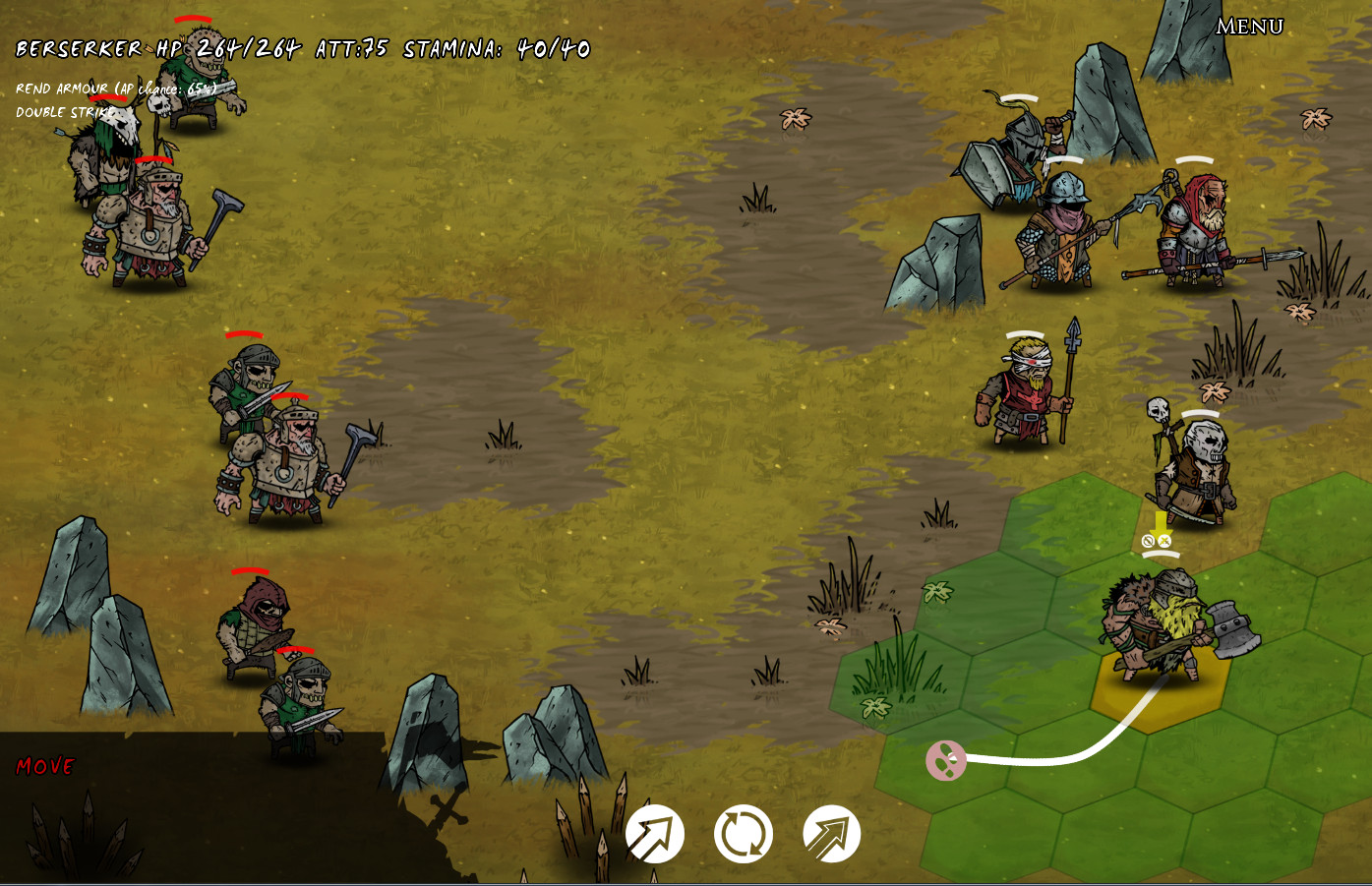 Other important feature of the combat system is flanking:

If your unit attacks an enemy, and he is flanked by one of yours, then a bonus damage is added to the final damage.

As you can see, it is extremely important to position your unit properly to maximize damage output.

The AI will attempt to do the exact same, so be vary ;)

Each unit has a stamina pool. For each ability used, the stamina is reduced by some amount. Stamina regenerates at the start of each turn. We added the possibility to execute an ability even if it costs more than the current stamina amount, in which case, the unit will be "exhausted" next turn, rendering it useless for the entire turn! We thought that we give the player the option to choose whether he wants to use ability along with its consequences instead of just disabling the ability until stamina has been replenished to some value. 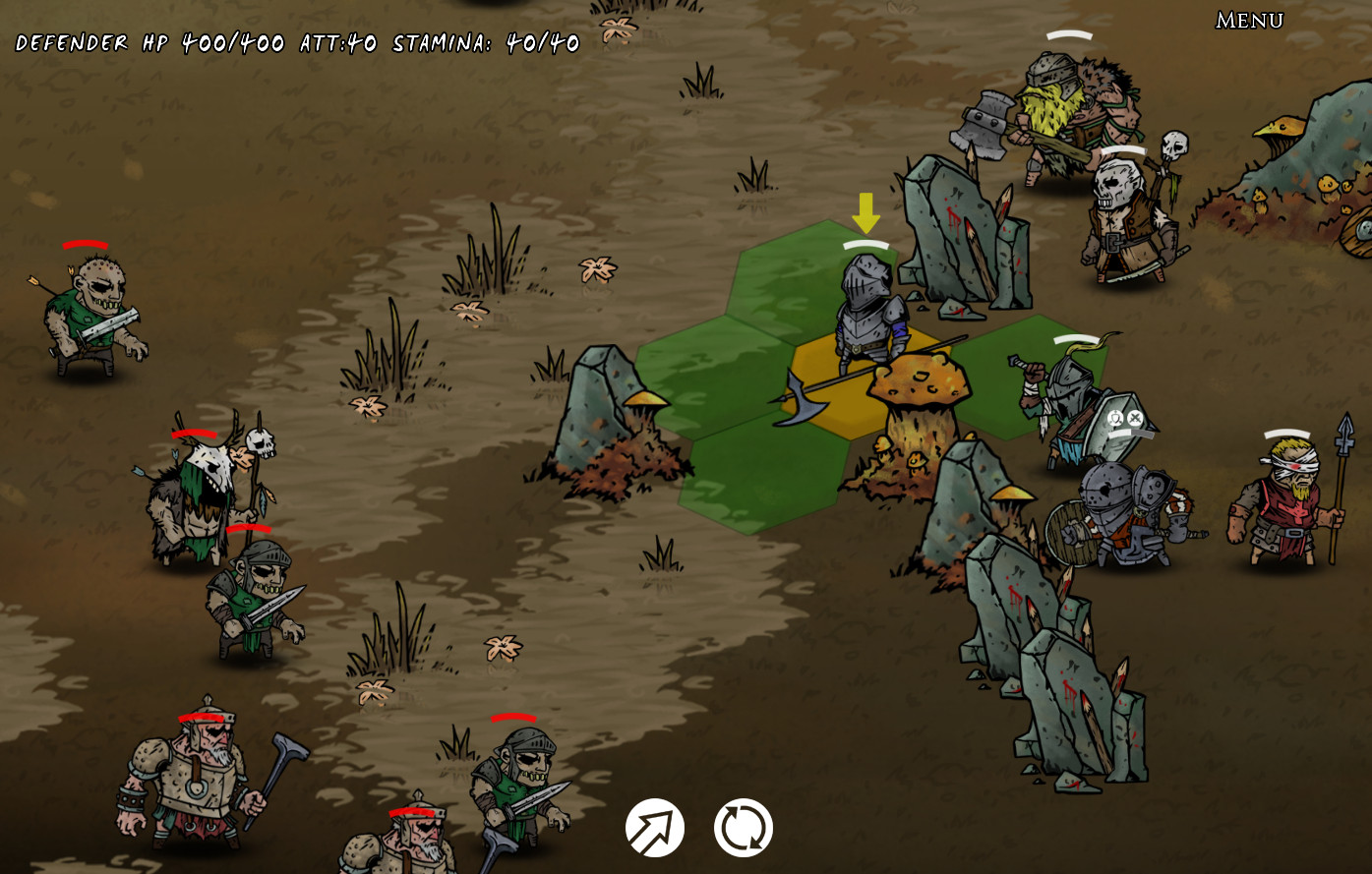 We will add more info about the game!

This sounds pretty neat and has a really nice art style, will the combat be based on dice rolls and will the stats be set up in a similar way to DnD?

Thanks for feedback!
No, this game wont be based on DnD rules.

I'm assuming the art-style is heavily inspired by Darkest Dungeon. Looks fantastic! Can't wait for more news regarding the game.