Posted by damianturnbull on Dec 9th, 2016

We've got a big update to get through this month. It's a little bit late because we were really pushing to get the Pre-Alpha 0.0.0010 out the door.

A lot of work has gone into Flesh Crafting and the inventory system. We've reached a milestone where all the pieces have come together and the main features are complete.

We're not done yet though. There is still UI polishing to do and there are some other minion customisation tricks we have up our sleeve.

We moved things around a bit so this screen makes more sense and is easier to use. The item list and character statistics have been move to the left hand side to make way for a portrait view of the selected minion.

Equipping items will be update the minion portrait in real-time so you can immediately see how your body parts modify your minions.

You will notice some filter buttons along the top that will filter the items by body part i.e. Head, Torso and Arms or by Junk items.

In the Easter Pre-Alpha we showed you some crude textures on the zombie. There was only three textures and they were mocked up pretty fast just to give you an idea of how customising your minions works.

Since then Scott has added a complete set of high detail textures that better express the combat effects each body part is imbued with.
A "Torso of Burning" really looks like hot lava. A "Head of Disease" really looks wet and sickly.

In a previous update we shared some images that showed special effects on each equipped body part.

It seemed like a good idea at the time. In reality it looked way too busy and it was impossible to tell if your minion was imbued with a combat effect or suffering from it. It wreaked havoc on performance and it didn't even look very good.

So we stripped back all the special effects and started again.

Now special effects will only applied to your minions' weapons when an imbued arm is equipped to their main hand. For example, your footman's sword will burst into flame with an "Arm of Burning" is equipped on their right arm.

Conversely your archer's bow and arrow will become electrified when an "Arm of Shocking" is equipped on their left arm.

Until now your sorcerer minion always fired the same ice ball no matter what body parts you had equipped. Now he will fire an appropriate projectile based on the arm you equip on his main hand.

If you played the Easter Pre-Alpha you probably experienced something like this.

After some AI balancing the combat experience is much more fair. Each character can be attacked by no more than two enemies at one time. This prevents the AI swarming the target that is first seen.

Also the AI will reassess who is on the battlefield as people die to keep things dynamic and interesting.

As a result combat is much less "PANIC" and more "Free-For-All Mayhem".

We've put a lot of work into designing undead minion classes that are useful in different combat scenarios as well as able to interact with the environment and clear a path.

As you probably already know, each undead minion correlates to a damage type:

The last piece of the puzzle was destructible environment objects that respond to ranged attacks. Now you can use your archers to shoot pulleys that open gates and portcullises.
Please note that the cogs and gears are only placeholder art and will be replaced with pulleys and chains. 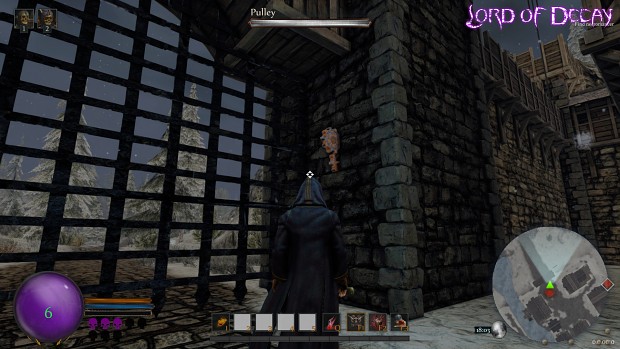 Our aim is to create more gameplay opportunities by adding multiple ways to overcome obstacles based on your play style and the minions you have in your horde. In this way we also guarantee that you can always find your way past any given obstacle.

In future updates you will be able to choose how you break into forts and cities. Use your footman to tear down the gate that leads into the sewers or break through a weakness in the city's wall. Use your archer to shoot the gears in the gatehouse to open the main gates or shoot a crane that drops it's load on the wall and opens the way. Use your sorcerer to destroy magical plinths that weaken your enemies' or reveals hidden doors.

Thanks to Legionary_119 for giving us the idea.

When we first designed the abomination we decided he should die 40 seconds after you summoned him. Our thinking was that we would reward you for harvesting blood and getting involved in combat with a brief and devastating flurry of abominable devastation. Of course having a minion that powerful on the battlefield for too long would make the game too easy.
Therefore it made sense that the abomination should be given a time limit.

However, we found that in practice this was no fun at all. Usually by the time you have harvested enough blood to summon the Brute Abomination the last enemy was almost dead. This meant that the abomination arrived too late to be of any use and then promptly expired before you could pick another fight. It simply wasn't worth your time to summon him at all.

From now on the Abomination will remain in your horde until he is killed. To avoid making the game too easy we have simply given him less health.

I wanted to make a quick mention that I came very close to getting world streaming working for the Pre-Alpha 0.0.0010. In the end I ran out of time though.

This might seem like early optimisation (which is The Devil), but we're already having performance issues with the ice valley scene.

The new island level that Scott is building is many times larger than the ice valley and without any optimisation the game will likely set fire to your video card.

If you didn't already know it's out and it's free.

It's still a little bit rough around the edges, but you get to see what we've been up to. We'll release a more stable version 0.0.0011 in 18 Dec, but we need your help to kick the tires and locate bugs

This is the perfect time to get involved. If you have a great idea or you've been waiting for a specific feature let us know.
Your suggestions will be incorporated in Pre-Alpha 0.0.0011.

We'll accept feedback in any format you feel most comfortable.

That wraps up another update. See you in a couple of weeks.

You can follow us on Twitter or Facebook for all the latest news, pictures and updates.
You can get involved in the discussion on the Forum or track our progress on Trello.

Watch the latest dev videos and technology demos on YouTube

Thanks for the support
Damian
Sandbox D7 Team

Thanks! I think it is 10x better than before and I'm hoping to make a few more visual tweaks before we go to Alpha early next year.