Hope you are all having a great summer and enjoying the sunshine! We are glad to announce we are releasing our new patch today. We have been working hard and have been cleaning up the game in many ways to make it much more enjoyable for all!

PLEASE NOTE IF YOU HAVE 1.015, PLEASE UNINSTALL BEFORE INSTALLING THIS NEW VERSION OF THE MOD

Hope you're all having a great summer and enjoying the sunshine (or thunderstorms). We're glad to finally announce the release of our new v1.016 patch; we've been working hard over the past months to optimise the mod in various ways and make it much more enjoyable for everyone! For example, we've refined the loading processes for many of our models and thus the mod will run at +20 FPS. We've also gone through all our old textures from before the server crash to repair any imperfections that were present in our current skins. Essentially, you're looking at a much more finalised mod. 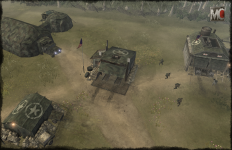 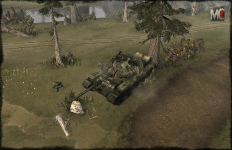 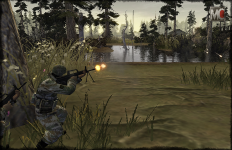 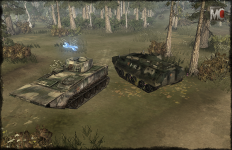 We've also fixed the singleplayer mission crashes that were introduced with v1.015, and replaced all the singleplayer Army units with their Marine equivalents. The mission has also been set-up to load its text strings from the various UCS language files, meaning that non-English translations are now supported. On the subject of translations, we've finally updated the German and Italian UCS files, which had become woefully outdated over the last year.

We've adjusted the durability of several key units. The Apache now has more health to deal with increased PLA AA capabilities, whereas the Abrams has had its health reduced somewhat so that PLA units can deal with it fairly. There have also been some major changes to the Type 59D. The vehicle now has greatly reduced accuracy against US infantry by default, but can be upgraded with a potent Type 54 12.7mm manned machine gun. Furthermore it now has the ability to fire ATGMs from its main cannon, functionally similar to the Bradley's TOW ability. With 100% accuracy and penetration, as well as a minor damage bonus, these missiles are perfect for finishing off low-health US vehicles or reliably dealing damage to the Abrams in a fight. 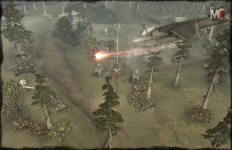 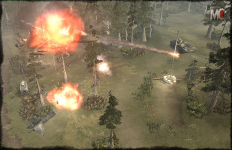 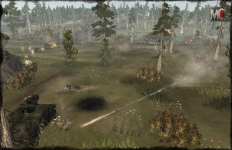 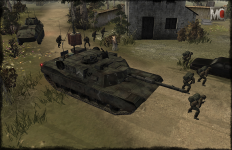 The US Marines have now been re-implemented as a standalone faction available for selection in the lobby. AI coding has been fully incorporated, meaning that you can now play against or alongside them in CPU games. To further differentiate the US Marine Corps from the US Army, all their infantry and vehicles now have unique skins. The Marine doctrines are still very similar to the Army ones, but there have been several additional alterations nonetheless. The A-10 strafing run has been replaced by a Harrier strafing run, the Apache has been replaced by a hovering Harrier, and the M1A2 and M1A2 TUSK have been replaced by the venerable M1A1. The M1A1 costs only 800 manpower to field, but is less durable than its more heavily-armoured cousins.

Other salient changes include the addition of both 60mm mortar teams and M1129 mortar carriers for the US Army, available in T2 and T3 respectively, as well as the addition of a global QBB-95 upgrade for PLA Regulars (purchased in T2 for 150 manpower and 30 fuel, requires either T3 or T4),

We're providing v1.016 to you as another full release, in order to incorporate an integrated updater that will make future patches much more hassle-free. Furthermore we're including a launcher program, to both make manual shortcuts a thing of the past and to run the updater each time the mod is started up. A second "Cheat Mode" launcher has also been included, as a learning aid for new players or for those who just want to play around with the mod on their own terms.

We hope you enjoy our hard work, and we hope to show you a few more surprises in the next couple weeks! The download will be replacing our old 1.015 Full Installation.

I like the changelog. its nice and long, and packed full of new features.

@Woozle
For now yes. Don't be worry, it will back in other place.

Do you planning to add new fractions?

a taliban faction with old sovjet stuff would be fun

Is the download the 'Modern Combat Full Installer 1.016' on mod db if it is when i open the launcher it says " 'steamapps' is not a valid short file name" do i need to change anything in my directory or is there something wrong with the launcher
thanks for help in advance

Did you still need help with this?

No it fixed itself thanks

Yes the modern combat folder plus the modules.

Marine structures don't have the stars on don't worry, I sneaked a set in without them on just before we packed the patch, plus there are a shed load of other updates added that are not mentioned in the list above. So you'll just have to see when you try it :) .

Thanks for the instruction. I think I also need to delete ModernCombatOps.module, right?

Yes forgot that one :)

Only complaint is the fatal scar error in the first campaign mission. Please someone post here is any fix works. otherwise pretty solid mod will give it a 10/10 once the campaign stars working

Already solved in the dev version, just waiting until a hotfix can be packed.

Is it the download of the 1.016 on moddb ? I believe it's an older version because i have nothing of the patch update wrote on this page, and USMC still a reward faction for US Army,
Please help, thanks

Will update to new release if confirmed compatible.

It should be, just make sure you enter the correct directory when prompted.

Also, just be aware that the BAT file we included won't work for you. You'll have to manually create a shortcut in order to launch the mod.

y i can't use the marines?, they're blocked

There's a bug after the objective "Hold the beach at all costs.", when you finish it (i think i finished it) it gives me a scar error.
Anyway, how do i use the cheat mode, i launch the one with cheat mode in it but afterwards what do i do? :l

Bug has been fixed in the dev build for ages, just waiting for our team leader to return so he can pack it.

is this mod available in the philippines?

Anywhere you have internet mate. ;)

we just downloaded the modern combat but when i click start it is still company of heroes allied and axis..please help!

Did you use the MC BAT file? It's located in:

hey i have a problem, iam missing the cheat launcher, basically i dont have any launcher after installation, not even a desktop shortcut..
i can play modern combat, but im using an
old shortcut from a mc version before without a launcher

Go to your CoH root folder. There should be a ModernCombat folder, within which you'll find two BAT files (one standard, one cheatmod) that you can use to launch the mod. :)

You can replace your existing shortcut with a shortcut to one of these.

hello ! i have a problem in playing first mission of the game its says that its fatal scar error and game stops , pleas help !

It's a known problem, and will be fixed in the upcoming patch. :)