We completely overhauled the interface of the game to a more standard format to prepare for the upcoming updates! (Monsters, weapons)

As a result of implementing some of the new features (new monsters, weapon upgrades), we had to design a much more friendly and easier-to-organize interface. You'll notice that there are more elements on the screen, but it'll be easier to locate everything you need and have everything under control.

On the top left corner, you'll still have the resources info and the PAUSE button and SHOP button. Now in the center, you'll have the DAY information and right at the other side of the screen you can check the weather condition. You'll also be able to check that in the background itself of the game, since it will change according to the current weather condition.

At the bottom there is now a menu which will display the doors information and the incoming horde information. However, all of the zombies attacking EVERY door will be shown right in the middle of the screen, attacking the church, regardless of which door they're actually heading to. This will be a nice sight to see, especially when dozens of zombies attack you at once and you get to see them walking towards the church (awesome pixel art by Pawel) while getting shot down! Also, since there will be more types than the basic zombie, the invasion will vary the more waves you survive.

With this new system, you can see all that is happening in a better way and you'll be able to use in-game items (mostly weapon upgrades) to kick zombies' asses. We hope that you like the new interface as much as we do!

Here's a screenshot for you to see. 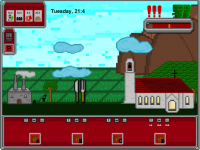 Thats Nice!Now,the players can make "records" of days lived in the game.ANyway,waiting that update.