I want to tell about the updated system of immersion of the boat. For understanding, I will tell in style of comparison "was – became".

I will begin with that was.On the panel there is the functional section changing depth of the boat. It is divided into two parts: Regular change and urgent teams. Regular change forced to change depth through the indication of desirable depth on a scale, and urgent had known depths and helped one fast pressing the button to set the maximum, minimum or periscopic depth. It ceased to be pleasant to me.
While I do this game, or a game prototype not important, I often address to the different technical literature, opening to me different subtleties.
Having received a sufficient set of knowledge about depth change, I decided to remake immersion system.In the first version the boat was well operated. The boat very precisely occupied depth, quickly and without mistakes fulfilled all requirements. It wasn't pleasant to me. Here the schedule of change of depths in the first version: 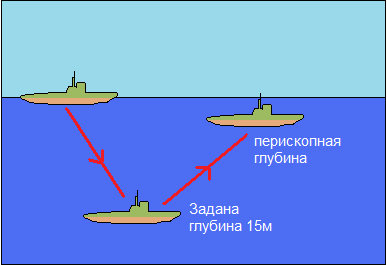 You see? The boat is extremely obedient. I press "15" both the boat quickly and the main thing very precisely finds this depth. I press "periscopic" and the boat with the same speed rises from depths. The urgent team or regular – has no value.

The boat simply with an identical speed occupies specified depths. It isn't correct.

I went further. I added new system on the boat. Now the boat can accept and dump a ballast. Certainly, I didn't do the copy of the real systems though such desire was. I didn't begin to divide capacity, and to create groups. In this case it should add manual control, it would oblige the player to know the principles of systems and to be almost the submariner. And unless the player is obliged to be him? There is no :). Therefore I didn't begin to load the player with the similar interface. Everything works in an automatic mode.

Now as it works.

The boat at immersion began to accept a ballast, letting the air out and receiving negative buoyancy. There is also a speed rule if the boat moves, the ballast is gathered small, sufficient for immersion, vertical wheels help to plunge quickly. And if it without movement, gathers the boat much more, vertical wheels can't help.

In the course of a set, buoyancy decreases, the boat starts plunging. As soon as the boat came to the set depth,alignment begins, we don't want to drown. And there is the first argument – experience of crew. The sailor is more skilled, the quicker he blocks one and opens other gates and highways.If the sailor the beginner, be sure, desirable depth will be reached not at once. The matter is that while the sailor pits excess weight and exhausts the compressed air in capacity, the boat has still negative buoyancy, it continues immersion. It proceeds while weight won't be leveled. But also it not all.Weight is leveled by the same methods! By one gate it is blown, with another it is filled, and again everything depends on experience of the seaman. Certainly, the smaller volume it is necessary to tire out or expel, the it is less than mistakes therefore that, the boat all the same will occupy sooner or later desirable depth and will level weight.But how many she jumps will make, if the sailor the beginner? Certainly running starts not big, but at small depths, can play an evil joke.

Having told as capacities work and on what they depend, I want to tell a little about urgent teams.

Unlike the previous version, urgent teams too depend now on weight and buoyancy. As well as in life, for urgent immersion, the boat gathers very large volume of water in a short space of time, opening all valves which are. At the expense of such fast reception of large volume of water, the boat literally fails on depth.Failing, she aspires so deeply as far as to it allows critical volumes – on a bottom. Therefore it is very important, in time to dump excess weight. The algorithm of management is simple: Having given command of urgent immersion, the player chooses desirable depth. Farther everything, as well as in the previous case. But only water volumes it is much more. The inexperienced seaman long brings the boat out of dive. Occupying the necessary depth, the boat at first will fail in a hole, and then will start getting out of it. If the immersion place deep, it isn't terrible but if small, consequences are notable. To the word it is possible even to drown. Emersion is similar, but it is simpler, to hit not so terribly. But emersion resource-intensive.

Having described a basis, I want to show on graphics as the behavior of the boat changed: 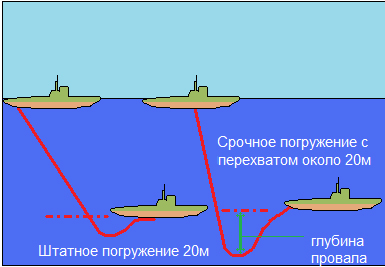 Here it is visible that the boat with different speeds leaves on depth and has failures about which it was spoken. This more correct representation seems to me.

As well as in lives, the boat it is difficult to hold at a depth if it costs without movement. Having plunged, and without starting engines, after a while it is possible to see how depth changes in different directions. The boat can rise, then go deep. This dangerous movement if the boat on shoal, or superficially plunged near enemies. Therefore helmsmen here play a role. The boat has a course, and helmsmen vertical wheels help our sailor to keep depth. The crew works solid. Therefore immersion without a course isn't recommended if there is no need for it. And occupying depth, the boat quicker it will borrow without excess movements if the boat has a course.

The compressed air. To them by the boat do pumping of tanks and reduce weight. And it has property to come to an end. But the resource always replenishes, at the expense of the compressor. Unfortunately, the repeated purge attracts a big expense, and the compressor has the speed of work. There is one more dependence of experience. The more the sailor does purges (for example, at alignment) the quicker the compressed air comes to an end. Means, can happen so that at the right time air doesn't remain. Urgent emersion, for example, too spends a lot of air. But sooner or later the compressor will pump up air. Only there is one more dependence – an expense of the electric power and increase in level of dependence. To twist each unit at a depth is an additional source of consumption, and batteries have property to come to an end. In too time, each device publishes a lot of noise, and acoustics of the enemy don't doze. Here also it is necessary to make a choice, to spend in empty air or it is better to reserve it till the necessary moment.

Now in development one more system, but I will tell about it later. But in advance running forward, I want to tell that the stravlivaniye of air or its stuffing in tanks has serious impact on this, it seems, in any way the related system. So it is worth reflecting really, and whether costs …

Note:
The system of a set of experience now isn't embodied by crew in a code therefore all moments where it is already involved, are replaced with constants with average values.

* I will notice, now it is more pleasant to look how the boat reduces immersion speed, in process of drainage of tanks as it leaves deep dive at urgent immersion. Personally for me the boat drew small interest of humanity.