Details about a new biological mission that takes place within the female fallopian tubes and involves sperm and bad microbes. 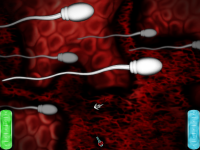 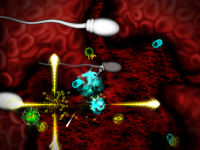 So I've just wrapped up the programming and art for the new sperm-related mission! Taking place inside the female fallopian tube, this mission requires you to intercept as many pathogens as you can while dodging giant sperm. The longer you last and the more sperm get through to the egg, the greater the reward (and if you stop all pathogens, one of those lucky sperm will fertilize an egg!).

Riding in alongside the sperm, pathogens come in increasingly larger waves with semi-random mixtures. Here are some of these nasty fellows:

I've been considering making an egg-specific mission as well, but I'm not quite sure how to approach it. If
it's just shooting down pathogens before they touch the egg, then it's pretty much the same mission as the sperm one. I'd like to do something a bit more clever, ideally involving the sperm as well. But I'd rather not have the player actively shoot down sperm, because then it's less about preventing disease and more about preventing conception!