I've added a new mini-game to Sportsball Party and made some project optimizations.

There is a new mini-game in Sportsball Party. It is called Log Stampede. The purpose of the game is to avoid the logs and be the last ball standing. As you can see in the screenshot, in this game you are riding in a cart. This is because the game requires a bit more precision than rolling around as a ball allows for. The cart will be used in a variety of other games as well. 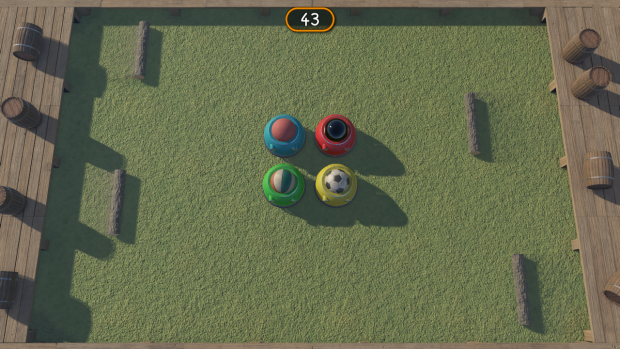 You can't tell from the screenshot, but the cart is on caster wheels. It has a base that doesn't rotate as you move around, but the main body does spin around to match the direction that the base is moving. This will be more obvious in mini-games that don't have a top down view.

I did have some difficulties with the image effects on this one. For the highest quality setting, the game will use Unity's temporal AA. I'm not sure if it is a bug or what, but whenever the logs rolled under the deck, their shape would ghost onto the barrels and the deck. To get around this, I added triggers to the deck and disable motion vectors on the logs unless they are outside of the triggers. In this case it was a fairly easy fix, but I can see that getting annoying if other games allow you to move under stuff. Hopefully it is something that is taken care of.

I've attached below a shot of the various balls that you can choose from so far. Not only because I forget to keep changing the balls for the screenshot, but because there are a lot of them and it would take a while for screenshots to show all of them anyhow.

Added to this at a later date, as I think I mentioned in the last article, will be a tennis ball, some wooden croquet balls, and a couple of rounded American footballs.

There is also something I would like to get opinions on. Since many of the games are designed for a 16:9 display, I decided to put letter boxing in to enforce that. I can't decide whether I should just have the black bars that everyone is used to, or if it is more visually appealing to have some simple graphics in the background. I think I like the graphics better, but I don't know if people will find the distracting. If you are running a different resolution than 16:9, I'd love your opinion on how the screenshot below looks in regards to the letter boxing: 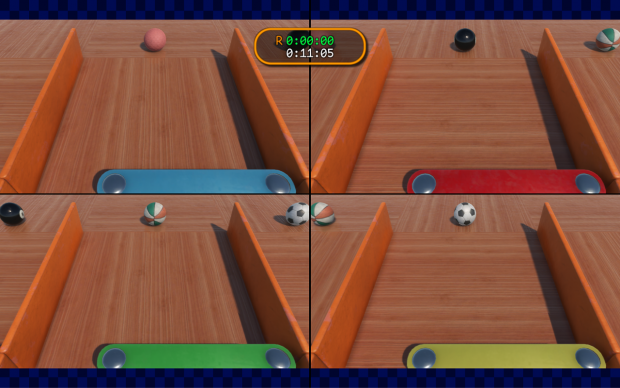 The graphics used may change slightly to match whatever the UI uses, in order to have a more consistent look. I'm thinking of using something very similar for the background of the UI, I just haven't finalized any design until I start work on that here in a couple of days.

The next mini-game will be a while. There are still many things that I have been delaying for all of the mini-games, such as complete sound, AI, optimizations and things of that nature. Over the coming days I will be doing those things, as well as the results page, intro cameras and anything else required to make the games complete.

Because I want to start a Kickstarter and Greenlight campaign soon, I'm also going to be modelling and texturing the first game board before moving on to another Mini-game. I mentioned in the first article that I'd like to get it in early access as soon as the Points Race mode is finished, so the board won't be implemented into the game right away. However, especially for a Kickstarter, I think it is important to show the board if you are pitching a mini-game board game.