Memory Management in the Glow engine

Memory management is very important thing in console world. We can forget about it on a PC (at least for several hours without leaks, but consoles are restricted, so we should consider that after some time, allocation of memory will return NULL (or exception, depending on compiler). Also fragmentation is serious problem after allocation of many small objects. So with the plans to move on mobile devices, we decided to develop system for memory management.

New memory manager is implemented for Glow engine. Separate optimized singlethreaded heaps with pools for small objects for every module of the engine (physics, ai, navigation, sounds etc) are added instead of the single common C++ heap.

Allocator for STL containers was implemented, so every memory allocation in the specific module goes from the module heap. STL containers and strings are evil force of a memory fragmentation, so process for removing every STL container from code is started. Some vectors are replaced by special Stack vector container, based on boost::array with restricted dynamic grow. Also major part of constant std::string was replaced with const char* equivalent (with memory allocated from constant string pool) and "copy on create if exists" usage. 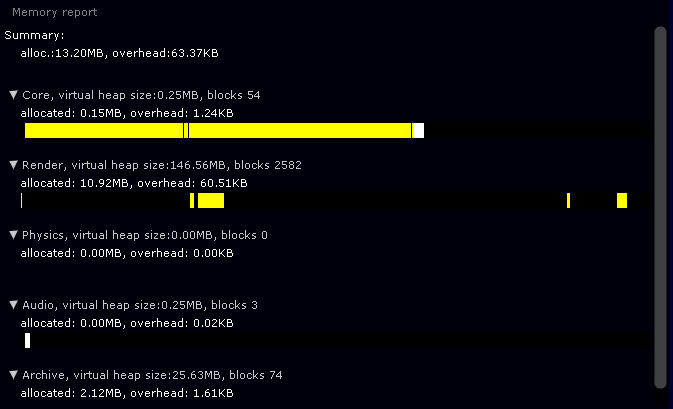 January release date was very optimistic, so we moved release of alpha version to Spring, 2011. Major parts are ready, but there are many small task to polish editor and engine.