Overview of the medium-large island map set on the planet Tibrin.

Tibrin: Coral Island is a relatively large island-themed map set on the oceanic planet of Tibrin (home of these guys, if anyone's keeping track). One of the fun quirks of Star Wars is its monoclimate planets, and this is another exploration of an Earth climate transposed onto a planetary scale - in this case, a tropical island. 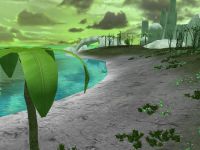 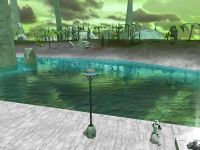 Of the maps I've added recently, this was a particularly nice one to add, because I personally didn't have to do a whole lot of work on it. Made by the same author as the earlier Imdaar: Shore map, the mapping was particularly well-laid-out. Having another well-done terrain-based map is nice too; since the majority of the maps I've made so far have been entirely modeled.

However, the work I did get to do for this map was particularly fun (made moreso again, by how little of it I needed to do). Aside from touching up a few prop models, all I really added was some new foliage and the different weather settings. What was particularly fun about this was how I got to use the new foliage with one of the weather settings. 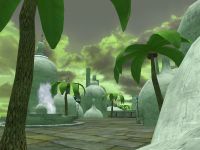 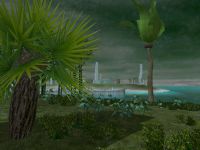 One of the more interesting (for a game of its age) things supported by Battlefront II is cloth physics (in fact the only thing it really supports any physics for at all is cloth). With the new palm trees I made the leaves cloth, and since one of its supported parameters is a wind option, I was able to manipulate this in the script to change the wind speed based on the weather. This gave me the option to really sell a windstorm, which is weather that's much more difficult to duplicate on any other map - so it's a fairly unique addition to this one. 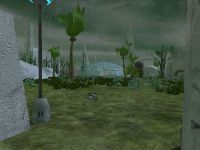 In the below video, you can see choppy, grainy footage (please forgive my old computer) of the "hurricane" in action:

Only a shocky video,