As part of our weekly release schedule, we have released a new piece of lore for the continent of Qadaroth. This piece tells a tale of a very special trade center, the Necropolis Bazaar.

The following is an account of the Necropolis Bazaar, from one who flaunted the warnings told in its myths and legends. We hope you enjoy the tale, and heed it's warnings! 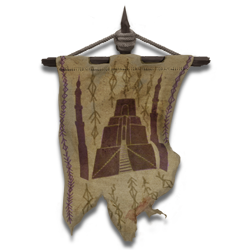 The ghost will be born soon. I can feel it moving inside me. I wonder if it will have my face. In a while I’ll take a blade to my belly and find out. In the meantime, a few last words to mark my passing – some whys and wherefores to help you understand.

I was three days out of Mazan-Ur and looking for the Necropolis Bazaar. My packs were stuffed with pottery from the Ziggurat of the Nine Serpents and I needed a buyer fast, before the Ziggurat’s priestesses found me. My road took me to the Leviathan, which is where I met the witch.

She lived in one of the Leviathan’s eye-sockets, high above the muddy pool that passed for an oasis. Whatever the Leviathan had been in life, in death it was home to a colony of whitetail hawks, a family of Ashari hunting lizards, and Mama Sigh, the witch. I had to wait for almost an hour in the shade of the Leviathan’s skull before she agreed to lower a rope ladder, allowing me to join her in the cavernous hollow she called home. From there I stared back down at the oasis, at the lizards hunting sandmites, at the shadows of hawk-wings dappling the dunes. Mama Sigh asked me what I wanted. I told her. She laughed.

‘There’s no love for a thief at the Necropolis Bazaar,’ she said. Her face was old leather, eyes shallow pools of brackish water, and her smile unkind. ‘Take your spoils elsewhere. You’ll live longer.’

I laughed back. I had heard all the stories about the Bazaar, but thought them mere desert fables. I didn’t believe in ghosts. Not yet.

But despite her warnings, she told me where to find the Necropolis Bazaar. So I thanked her, paid her in Benghi swamp-pearls, and returned to the desert floor. Behind me, the Leviathan leered a promise as I headed south. It knew better than I what lay ahead.

Mama Sigh’s instructions were simple enough: head south from the Leviathan until I stood at the base of the Pillar of the Hidden Moon, then follow the defile southeast, through the canyons until I find the Bazaar. The Pillar was a smudge on the skyline behind me before I met my first fellow travellers – Ixcari merchants returning to Talmoc, pack-lizards laden with the riches of the deep desert. We passed friendly words, shared our waters, and went our separate ways.

‘Fair words and fair trades at the Bazaar,’ they said as they headed into the west. ‘May your tongue be as pure as your coin.’

Another warning. Again, I was too stupid to see it.

I could hear the Necropolis Bazaar long before I saw it. Voices echoed from the canyon walls, a chorus of hawkers’ tongues, the song of the water-sellers, the clamour of desert birds, the baying of Ul-Wadari sand-hounds, the murmur of wind across stone. All drew me nearer, until I rounded a bend in the canyon and saw it spread out below.

The Necropolis Bazaar was exactly what its name suggests: a riotous market held in the midst of an ancient necropolis. Tombs and sepulchres reared on all sides, lining the canyon floor, carved into its walls, rising dozens of yards above into the cliff-faces. Its pillars and statues were anchors for awnings, shading the market from the sun. Its plazas were stables, its fountains food troughs, its catacombs warehouses.

And the smells. Pungent mopu cactus, fragrant talena, and cloying bask-berry. Lizard meat sizzling, spilled wine drying, sweat their perpetual undercurrent. I let them pull me under and drowned myself in the Bazaar.

The sun had sunk below the canyon walls before I found a merchant willing to buy the pottery from the Ziggurat. By then, the Bazaar was alive with captive fireflies – the traders snared them in glass globes which they hung from the pillars and tombs – and the market glimmered in their restless luminescence. The merchant and I sat together on a threadbare rug and argued over the price. His name was Yuti and he was possibly the tallest Ul-Wadar I have ever seen. His skin, dark mahogany, was etched with abstract tattoos – swirling azure serpents, hollow moons and nameless glyphs.

‘Where did you get the pottery?’ he asked. 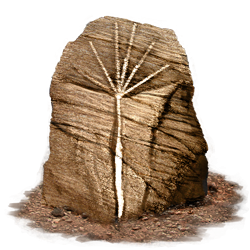 ‘From the house of Patrahi-Mal, the one-eyed craftsman.’ It was a lie, but I guessed Yuti had never been to Mazan-Ur. The Ul-Wadar seldom came that far north.

‘Patrahi-Mal’s work is fine,’ Yuti said. ‘But not this fine.’ His eyes, soft and forgiving, held me in a gentle gaze.

‘I did not say Patrahi-Mal made these. Only that he sold them to me.’

‘This is the Necropolis Bazaar,’ Yuti said, turning one of the pots over in his hands. ‘And your tongue is as pure as your coin.’

A third warning, and I was as deaf to it as before. I said nothing.

‘So.’ Yuti nodded. ‘Your tongue is pure. Your wares are fine. I will buy at the price you ask.’

I gave him the pottery. Yuti paid me in silver coins the like of which I have never seen. I tried not to look surprised. The Ul-Wadar are always bringing things like this out of the deep desert. They know of ruins, I think, too distant for others to find, filled with riches from before the Great Dying.

Just one of Yuti’s coins was enough to buy me a hot meal and a jug of wine, so I took myself into one of the empty catacombs along the southern edge of the Bazaar, and settled down to eat. The spiced lizard steak and cactus wine sated my hunger, eased my aching limbs and set me on the road to slumber. I rolled myself in my blanket and let my eyes droop shut.

The cold awoke me. At first I thought it just the chill of the desert night but soon realised how wrong I was. Although the market traders had covered all but a handful of the fireflies, a wavering light rippled throughout my resting place. It was pale and watery, faded yellow, and brought cold wherever it fell. I blinked sleep from my eyes and looked up to see where the light was coming from. I immediately wished I hadn’t.

Standing over me was a ghost.

There’s no other word for it. I said I hadn’t believed in ghosts. Well, in that moment all incredulity fled. There was no mistaking this apparition for anything else. It was faint, translucent, spilling bruised light across my startled features. Clad in ancient robes, it wore spectral finery from the graves of kings, clutched a glittering sword in one ghostly hand, and stared at me with undisguised hatred. I have weathered the anger of many a man, but nothing could have prepared me for the malice of the undead.

‘Your tongue is false!’

Its voice was a gasp, as if speech demanded more strength than this creature could command. It pointed its free hand towards me, an accusing claw. I babbled something incoherent and tried to scrabble backwards into the catacomb.

‘False,’ it repeated, and flowed across the floor towards me.

I shook my head, recalling now the warnings given me by Mama Sigh, Yuti, and the Ixcari traders. I recalled also the stories I had heard about this place, how the dead watched over the living, and punished the dishonest. I had laughed at those stories. Now I begged for mercy.

My back scraped against the back wall of the catacomb. My feet slipped in the dust. Wordless whines came from my lips and my hands fluttered before me, as if they could hold back the ghost.

They could not. It loomed over me, flooding my face with its bitter light. In its unliving eyes, balefires burned.

‘Your tongue is false,’ it whispered. ‘But I will give you purity.’

With that, it clasped its hand to my face, its mouth to mine, and vomited a freezing torrent down my throat. I spasmed, struggled, but its grasp pinned me. I felt something churning in my innards, rippling and aware. It settled into my loins like a lump of ice and lay there, nestling deep. 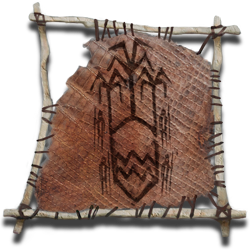 The apparition withdrew. A trickle of gleaming fluid ran from the corner of its mouth. It looked down at me, satisfaction replacing the hatred in its gaze.

‘Now you are pure,’ it said. ‘Now my seed is within you, and shall be fruitful.’ Then it drifted backwards out of the catacomb and was lost among the sepulchres and awnings of the Bazaar.

I lay there for what seemed like hours, waiting to die. But death did not come. Not unbidden. What had the apparition meant? I had no answers.

And then I felt it move.

It was a fluttering in my loins, barely noticeable at first. Then it came again, and with it a muted gasp that rose up from my belly. I knew then that the ghost had not lied. It had laid its seed within me. It had filled me with its unliving purity, to replace the lies that were my life.

I drew my knife. I lifted my tunic. My belly quivered once, then was still. The movement invited my knife and I let the blade’s tip caress my skin. But only for a moment. Then I set the knife to one side and leaned back against the catacomb wall. In my pack I had parchment, ink and quill. If I was to die here, better that I leave some record of my passing. Better that others learn from my mistakes and never test the truth of the tales about the Necropolis Bazaar.

The ghost will be born soon. But in the meantime, these words. Pay them heed, so that when you come to the Necropolis Bazaar, your tongue will be as pure as your coin. For if not, purity will find you, and show you the face of your folly. I know already what its face will be.


This story was written by our lead writer, Mark Hope. For other information about the game, make sure you click on the features tab up above, and check out all the videos and information we have posted there!