A small explanation about our new logo for the mod based on Rogue One and what Designated Days will eventually bring to the modding community. 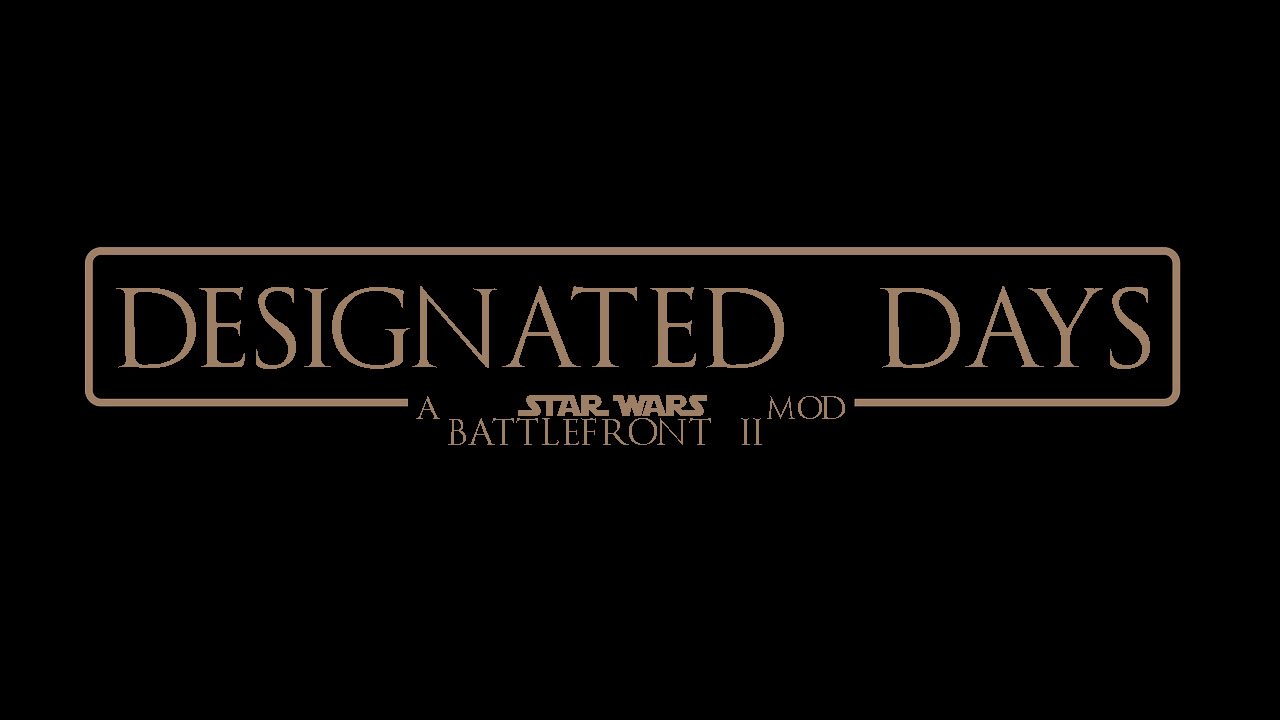 Hello everyone, first - LOOK A NEW LOGO BASED ON THE ROGUE ONE LOGO! Now that I have your attention, I'd like to discuss where we're going with the mod.

Firstly - no we're not dead, we're still very much alive. Things have been slow. This past week I have been hospitalized due to a very bad infection, but yesterday I was finally released and I got to watch the new movie. With that being said, ROGUE ONE CONTENT IS ON THE WAY! That's right, we're incorporating Rogue One into our Imperial Days series - starting with Scarif, but I'm not going to reveal any details regarding the movie. Sorry to disappoint, but I hate nothing more than spoiling experiences for everyone who hasn't yet seen Rogue One. With our recently released assets pack, we're hoping to see other peoples' versions of Scarif! Or maybe other planets, even?

The main series is also still underway, with Icer trying to fix some things with the final battle of chapter 1 and then chapter 2 being worked on. I haven't really been able to map, so I'm going to have to shift my map over to him and direct him with things I've been thinking about regarding the map - but I did get the sides in pretty much how I wanted them. There's that, at least. I hope everyone can spend time with their families over the winter months here and get much needed relaxation time. With me having relaxed for 5 days in the hospital away from my family, I really want to get things done as much as I can, even if it's only providing skins, map layouts, and reference photos. I can't really model because my computer hates XSI mod tools and refuses to run them. And Blender doesn't give me much luck either. So I'm stuck doing ODF work on my sides and various units here and there and maybe giving a basic layout in Zero Editor to Icer to touch up on. Better than nothing, I guess! Thanks for taking time to read, folks. Hope this update wasn't too disappointing. :P

An update is still welcome ;) For now I'm just waiting for ABG....since quite a lot of time now, in fact since the first pic posted at SWBF Custom...XD

Also try to hex-edit models when you don't have XSI, you can do some cools things with model chunks. I'd be honored to provide help thanks to P.Ms.

What I have done for a little period of time it's to use Blender: do you your modifications, export as .obj; open XSI import the model and export as .msh ;)

Yeah, I have HxD Hex Editor. I need to get the hang of using it. Would definitely be helpful when I want to make things like Imperial Army Troopers (these guys never get any love) and other variants of Stormtroopers.

I have...mixed thoughts about Rogue One.

I certainly didn't hate it, but I felt it was just kind of unneeded.