For technical and simplicity reasons, we have decided to go with Imperial Guards under the infection of the Nurgle Plague as common infected. 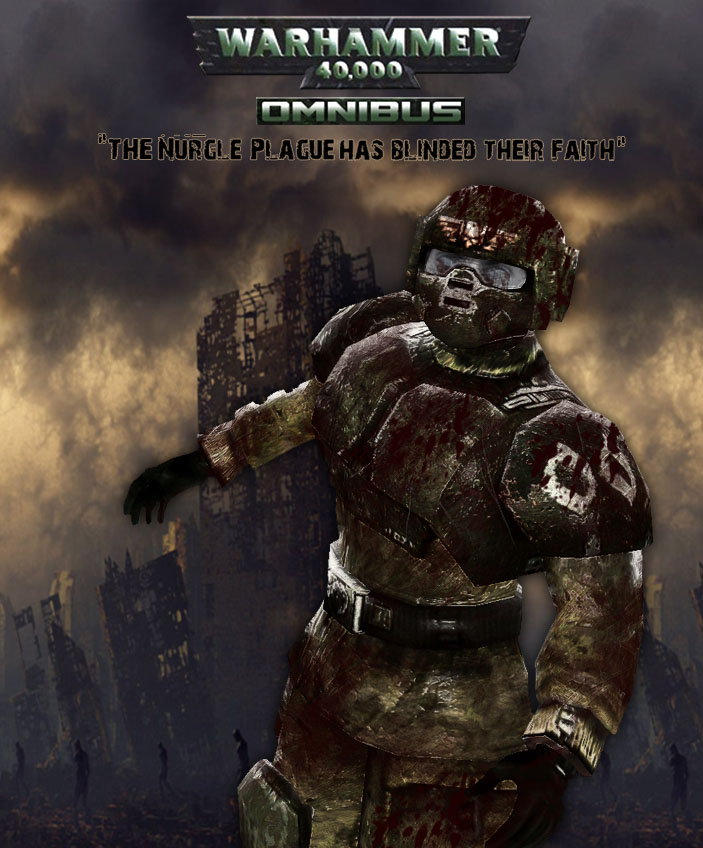 "Nurgle is the Chaos god of disease, decay, despair, destruction and rotting death. He is the oldest of the four Chaos gods and is the most involved with the plights of mortals. Many of those affected by his poxes usually turn to him in order to escape the pain caused by sickness"

The imperial guards are infected by the poxes of Nurgle. They start to turn to the chaos and become extremely aggressive and lose most basic thoughts. They mainly wander around and attack anything on site including each other.

Lol no one likes the news it seems.

You serious? Its fking amazing! ! :D

Awseome man, this works really well. Just have to do the SI justice now, and make some good IG models.

Will they be cadian based or the others like Catachan, Mordian, valhallans, steel legion, tallarn etc?

I'm happy, if it makes it easier on you guys, good job!

I am curious about the SI though...any ideas yet?
are they just gonna be reskins?

Boomers fit nurgle perfectly, though i dont think that any of the others do as much :/ Alot about nurgle is about infection, disease and high toughness (going by tt stats).

Hunters i dont know,
Smokers no idea,
Tank could be a deamon? I can see a mutated space marine roaming around here working really well.
Witch....no idea whatsoever

Then again, who says they have to have the same role. He could do anything for them.

Hmm...a Tank with SM helmet would be pretty badass, and maybe infected of some kind of Khorne mutation? Or just an exaggerated Khorne Berserker.
Bommer will obviously be Nurgle along with Hunter since the Hunter doesnt really fit along with anything else and I believe we dont need to have 4 different unique type of chaos special infected. Smoker could maybe be Slaneesh together with the Witch.

Your best bet for tank would actually be a daemon of chaos, they're the only things big enough to fit the bill. As for other SI, Smokers would definitely be Nurgle - the cloud could be seen as Nurgles rot. I'd go with Daemonettes of Slaanesh for the witch, and it'd probably work better for the Hunter too - the mark of Slaanesh heightens a units initiative, basically their senses, reaction times etc. With a hunter being the quickest of the group I think that's your best bit. As for the boomer, while I agree he'd best fit under Chaos, I don't think the vomit fits all too well. The plague is spread more through clouds and swarms, and wouldn't really attract more Chaos Marines to the location, but I suppose there's nothing you can really do about that. As for common infected, I think Khorne would be best - fits with the fact that they'll just mindlessly run at and assault whatever they can.